Paul Watts with thanks to Carolyn Childs 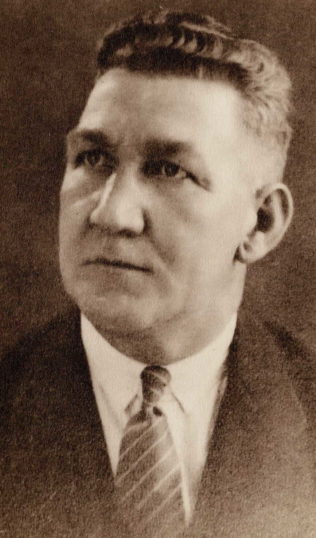 George Smith was born on the 4th July 1890 at Northchurch and he was baptised there on the 7th September 1890. The family were recorded as living in Gossoms End, Northchurch.

His father, Charles George Smith a timber sawyer and general labourer, married his mother, Mary Bryant (seen as Brient or Briant), on the 15th December 1883 at Northchurch. She already had a daughter Alice Annie Brient (shown as Smith in the census) born in 1880 at Northchurch. They had four children all born in Northchurch:
1. Nellie Emily born in 1884.
2. Grace Florence born in 1887.
3. George.
4. Edward Victor born in 1894.

During the 1891 census the family were living at 8, Eddy Street, Northchurch and in the 1901 census they were still at the same address.

George Smith joined the Royal Navy on the 31st August 1905 at Portsmouth as a Boy Seaman 2nd Class 234675. He gave the following information:

He said he was born on the 4th July 1889 (in reality he was a year younger at 15) at Berkhamsted and his trade was as a striker and blacksmith. His description on first entry was recorded as follows: Height 5 feet 7 6/10 inches tall, hair light, eyes grey, complexion fresh and he had two scars on his left arm above the elbow.

Whilst aboard Albion on the 4th July 1907 (ostensibly his 18th birthday) he began his 12 years of Continuous Service Engagement as an Ordinary Seaman. His height was now recorded as 5 feet 10 inches. On the 31st December 1907 and a year later, his character was rated as very good on both occasions. On the 3rd March 1909 he was promoted to Able Seaman.

During the 1911 census his family had moved and were living at 18, Shrublands Avenue, Berkhamsted. His father died in 1912 at Berkhamsted.

On the 28th September 1912 he served on HMS Victory 1, then on the 3rd October he moved to HMS Excellent. On the 31st December 1912, his character was rated as very good and his Efficiency in Rating as satisfactory.

On the 17th January 1913 he was approved for a free Discharge as a special case and for the last time his character was rated as very good and his Efficiency in Rating as satisfactory. It is speculation but with the death of his father it is likely his mother was in need of support, something which he could not provide whilst remaining in the Navy.

On returning home George apparently quickly found employment as a labourer for John Dickinson and Co. Ltd. of Hemel Hempstead, but he then applied to join the Hertford County Constabulary. As part of that process he underwent a medical examination by the Force Surgeon at Police Headquarters, Hatfield on the 11th July 1913 to determine if he was fit enough for Police duties.

He said he was born on the 4th July 1890 at Northchurch. His height was recorded as being 5 feet 9 ½ inches, his chest 36 inches, complexion fair, eyes grey and his hair light brown. He said he could swim but could not ride a pedal cycle. He said that he had served in the Royal Navy as an Able Seaman for 7 ½ years and was discharged on the 17th January 1913. He gave his next of kin as his mother Mary Smith.

George was Appointed as Constable 298 on the 5th August 1913 and started his Probationary Training at R Division Police Headquarters at Hatfield. At the completion of his training he was Attested on the 29th December 1913 and posted the next day to E Division at Hitchin.

In January 1914 Joseph passed his Ambulance certificate, an important qualification which entitled him to wear a badge on his lower left tunic sleeve to show he was trained in basic First Aid.

The outbreak of the war saw a wave of xenophobia sweep the nation and many Germans nationals who were considered a threat to the nation were sent to internment camps for the duration of the war. Libury Hall, Great Munden, Ware became the county’s largest internment camp. Prior to the war the manor house had been converted into a German Industrial and Farm Colony to provide work and housing for unemployed and destitute German men. It was therefore a logical move that it should be expanded and during the course of the war 566 men of ages 60-90 were interned in the camp. The pre-war director W. Müller remained in charge of Libury Hall under the supervision of a British commandant and an armed police guard. The police were housed in a farm cottage on the site. (Source Herts At War website)

George was delegated to act as one of the armed guards. However, due to a change of Policy regular Police Constables were withdrawn from the guard. General Order 63 of 15th April 1915 instructed George to return to his normal duties:
Consequent upon the Military Authorities having undertaken to provide a Military Guard at the German Farm Colony, the undermentioned officers of this Police will resume ordinary duty and will proceed to their respective stations, as under, on 15th April 1915:
PS 70 Bowman W. B Division Bishops Stortford
PC 306 Hussey W.H. A Division Ware
PC 307 Markwell J. C Division Watford
PC 298 Smith G. E Division Hitchin
PC 62 Allen W.J. F Division Hertford
PC 137 Dowty F.W. G Division Harpenden
PC 276 Deer H.F. E Division Little Munden.

General Order 73 of the 30th April 1915 instructed George that he was being transferred from E Division at Hitchin to E Division at Royston on the same day. His Police Service Record states that he actually moved on the 20th April.

General Order 102 of the 21st June 1915 was entitled Police Constables (Naval and Military Service) Act 1914, Police (Emergency Provisions) Act 1915 and said:
The undermentioned Police Constables being desirous of enlisting in H.M. Army for the period of the war, the Deputy Chief Constable hereby gives the necessary consent, as required by the above Acts.
1. PC 298 Smith G. E Division
2. PC 96 Brice J. E Division
The Constables will be permitted to join the Army at once and will be paid up to and including the date prior to that on which they commence to draw Army Pay.
The Superintendent E Division will report to Headquarters the date on which the Constables are enlisted in the Army, and the Constables will be struck off the strength of the establishment of the Force as from that date.

General Order 118 of the 21st July 1915 is a list of 96 officers which included the Chief Constable, 43 Constables who were Army reservists who were recalled and 50 Constables and 2 Sergeants who volunteered for military service. George is shown as PC 298 Smith G. E Division who enlisted in the Royal Army Medical Corps on the 23rd June 1915 with PC 96 Brice.

His Police Service Record shows that George enlisted in the Royal Army Medical Corps on the 24th June 1915 and that he served with them for 3 years 9 months in Mesopotamia between the 22nd December 1916 and the 18th December 1918 and was Discharged on the 26th March 1919.

His Army Service Record has not survived and there are too many possibles for a definite match in the collection of Medal Roll Index Cards and Medal Rolls. However, based on the fact that he apparently joined the Royal Army Medical Corps with PC 96 Brice, and therefore may have a Service Number similar to that of Brice (60565), and that he got married in Berkhamsted in the final quarter of 1916 then there is one possible match but, unfortunately, the record does not have much to offer in the way of detail:
George Smith Private 60576 Royal Army Medical Corps and was awarded the British War and Victory medals.

George married Florence Elizabeth Crow in 1916 at Berkhamsted. There is no record of them having any children.

Like every other soldier when he was demobilised Arthur was granted 28 days leave. He would have used this time to arrange his re-joining of the Police. Part of this process would involve him being medically examined by the Force Surgeon to ensure he was fit enough for Police duties. George was examined on the 19th March 1919.

General Order 74 of the 21st March 1919 announced the re-appointments to the Force of five Police Soldiers who had been released from H.M. Army. George was shown as PC 298 Smith G. posted to E Division at Royston from the 27th March 1919 at £2/8/0 per week. Each officer had to be formally re-attested. The Superintendents concerned had to report when this had been done showing the date and place of attestation and before whom taken. George was re-Attested the same day.

General Order 92 of the 11th April 1919 instructed George that he was being transferred from E Division at Royston to F Division at Hertford on the 24th April 1919. The Electoral Rolls of 1920 to 1925 list George and Florence as living at 7, Baker Street, Hertford.

George was part of a detachment sent to Luton to help quell rioting between the 20th July and the 5th August 1919. 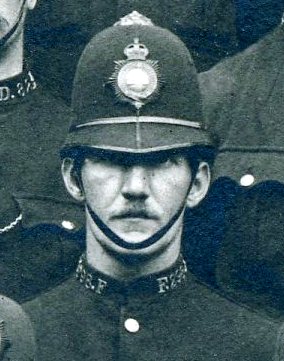 General Order 76 of the 12th June 1922 announced that George had been commended for his work in the case of Rex – v – H. Jackson, CRO 8871-15 Larceny Tools: At Biggleswade Special Petty Sessions on 6th June 1922 the Chairman, R.O. Fordham Esq., commended Constable 298 G. Smith of the B or Hertford Division for the smart manner in which the Constable effected the arrest of Jackson. The Chief Constable endorses this commendation and directs that an appropriate entry shall be made on the Constable’s record sheet.

General Order 28 the 28th February 1925 instructed George that on the 13th March 1925 he was being transferred from B Division at Hertford to A Division at Bishops Stortford, to occupy a vacant house at Havers Lane. The Electoral Rolls of 1926 to 1930 Electoral Rolls list George and Florence Elizabeth Smith as living at Police Cottage, Havers Lane, Bishops Stortford.

George’s Police Service Record shows that he was again commended by the Chairman of the Biggleswade Petty Sessions on the 2nd September 1926 and it was endorsed by the Chief Constable.

George’s Police Service Record shows that on the 9th December 1930 he was transferred from A Division at Bishops Stortford to E Division at Stevenage.

George’s Police Service Record shows that he was again commended this time by the Chief Constable for assisting at a fire at 23, High Street, Stevenage on the 11th July 1931.

In Trouble Maybe Not!

In the 1939 Register George, shown as working as a Firework Factory Gatekeeper, and Florence Smith are listed as living at 66, Weymouth Street, Hemel Hempstead.

George Smith died on the 10th January 1947 at Berkhamsted.