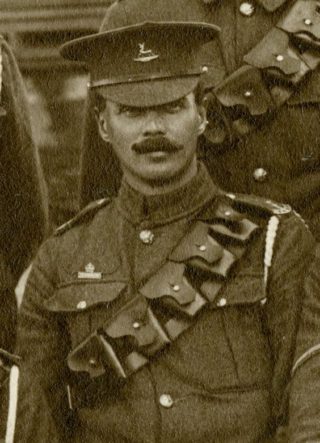 Ernest Albert Victor Elkins was born on the 15th December 1887 in York into what can only be described as a Military family. Also, like the Dolley brothers, this is a story of two brothers who were Hertford County Constabulary Police officers, only fortunately with a much happier ending.

Daniel Elkins was posted to India, taking his new wife with him, on 28th December 1876 and he served there and in Afghanistan until 22nd November 1885. Daniel and Emily had seven children with the first being Henry Francis Charles who was born on 10th March 1883 in Umballa, India and was to become the second Hertfordshire Police Officer. He was an Army Reservist and his story can be found under that category.

Then came Bertram George Canon who was born on the 28th May 1884 also in Umballa. Like their father he became a career soldier finishing as a Colour Quarter Master Sergeant in the Royal Fusiliers having served right through WW1. Next came Ernest. Fourth eldest was Douglas Stewart who was born on the 29th April 1890 in Chorlton, Manchester he served in the 1/8 Battalion, Middlesex Regiment again throughout WW1.

Then came the first of two sisters, Edith Madeline, who was born in 1893 in Dundalk, Ireland followed by Theresa Patricia Kate born on the 16th August 1894 in Aldershot. Finally, there was Eugene who was born in 1899 at Fort George, Guernsey. He served as Private G/28924 in the 7th Battalion, Queen’s Own (Royal West Kent) Regiment and died of wounds on the 31st March 1918 in France.

During the 1891 census the family were living in Ireland where their father was serving as a Troop Sergeant Major in the 9th Lancers.

At the time of the 1901 census the family were living at Inkerman Barracks, Knaphill, where their father, who had left the Army after completing 21 years’ service, was the Canteen Steward in a Beer Bar and probably employing Henry who is a Canteen Waiter.

In the 1911 census the family, except Henry and Ernest were living at 98, High Street, Berkhamstead where their father is running his own Wine and Spirit Merchants. Henry was about to leave the Army whilst Ernest had joined the Police.

Ernest’s Form 3 Police Service Record still survives and shows that he was medically examined on 1st February 1911, the Police Surgeons Certificate stated:
“I hereby certify that I have examined the above candidate as to his health and bodily strength and consider him fit for the Constabulary of this County”.
(signed) Lovell Drage Surgeon.

Ernest started his Probationary training at C Division Watford on the 14th February 1911. He was Attested on the 28th March 1911 at Watford but was not finally appointed until the 20th April 1911 as Police Constable 10.

The 1911 census records that there were two Hertfordshire Constabulary Police Constables, Ernest Albert Victor Elkins and Jon James, boarding with a family by the name of Day at 25, Sutton Road, Watford.

His description was included on the form:
Born: 15th December 1887 York. Height: 5 feet 11 ½ inches. Chest: 36 inches. Complexion: Fresh. Eyes: Blue. Hair: Brown. It also gave his previous occupation as assisting at the Wine and Spirit store for his father D.C. Elkins, High Street, Berkhamsted and that he could both ride a bicycle and swim.

As well as his Service Record a number of General Orders also refer to Ernest. General Order 13 of the 15th April 1911 announced that “Probationer Elkins 10 C is appointed to the strength of the Force from 20th April inclusive, and is posted to E Division”, he was in fact posted to Stevenage.

On the 19th March 1912 he passed his Ambulance certificate, an important qualification which entitled him to wear a badge on his lower left tunic sleeve to show he was trained in basic First Aid. It was also necessary for him to have this as it was a condition of further progress up his pay scale.

General Order 8 of 1914 announced that the Chief Constable had commended Ernest for his actions in case of Leah Farr who attempted suicide at Stevenage on 8th January 1914.

His Service Record shows that on the 18th September 1914 he was transferred from Stevenage to D Division at Berkhamsted almost certainly as part of the major reorganisation caused by the sudden loss of the Army Reservists being recalled. Then less than 5 months later General Order 15 of 21st January 1915 reported that Ernest was again on the move to A Division at Chipping from the 4th February 1915.

General Order 118 of 21st July 1915 is a list of 96 officers which included the Chief Constable, 43 Constables who were Army reservists who were recalled and 50 Constables and 2 Sergeants who volunteered for military service. Ernest is shown as PC 10 Elkins E. A Division who enlisted in the Hertfordshire Yeomanry on 13th June 1915.

On the 25th July 1915 Ernest married Muriel Anna Saunders in the Parish Church Holy Trinity, Hounslow. He is recorded as being a Private in the Hertfordshire Yeomanry and his father Daniel, who was a witness is shown as being a Yeoman of the Guard.

Having learnt that he enlisted on the 13th June 1915 we know very little else as his Army Service Record no longer exists. From his Medal Rolls and Medal Roll Index Card we do know that he joined the Hertfordshire Yeomanry as Private 2529 which under later re-organisation was changed to 105791. He landed in Egypt on 9th September 1915 and was later promoted to Corporal and he was later awarded the 1915 Star and the British War and Victory medals.

His Police Service record simply states that he served in the Hertfordshire Yeomanry for 3 years 9 months and was discharged on the 6th March 1919.

Back home the families had not been forgotten as can be seen by General Order 20 of 19th January 1919 entitled, “Allowances to wives of Police Soldiers”.
It announced that the Chief Constable had considered the position of each individual Police Soldier under the new scale of pay and found after taking into consideration the total income of the family from allowances, including the value of the soldier’s food and clothing, that in 16 cases the families were in a worse financial position then they would have been had the man remained in the force. These cases were put before the Standing Joint Committee and they authorised extra payments, with effect from 1st July 1918. PC 10 Elkins A Division was awarded £0/1/5 extra per week with £2/0/3 to be paid retrospectively with the allowances for the week ending 22nd January 1919.

Ernest’s Police Service Record shows that he had a medical examination on the 28th February 1919 and was found to be fit for continued Police service.

General Order 57 of 1st March 1919 proclaimed that ten men, having been released from H.M. Army, would be re-appointed to the Force with effect from the dates shown. Ernest was shown as PC 10 Elkins E.A.V. posted to A Division at Hoddesdon on the 6th March 1919. Each officer had to be formally re-attested and the Superintendents concerned had to report to the Chief Constable when, where and before whom this had been done.

Very quickly Ernest found himself on the move again with General Order 92 of 11th April 1919 announcing that from the 17th April 1919 he would be transferring from A Division at Hoddesdon to E Division at Letchworth.

Promotion And Another Move.

Ernest was promoted to Acting Sergeant from 26th April 1922 and on the same day he was transferred from E Division at Letchworth to D Division at Hemel Hempstead to occupy vacant house. The Electoral Rolls of 1923 to 1925 Voters list him and his family as living at 23, Astley Road, Hemel Hempstead.

A year later in General Order 89 of 3rd May 1923 Ernest received confirmation of
the fact that he was promoted to the substantive rank of Sergeant from the 26th April 1923. He was also awarded another pay increment from £5/0/0 to £5/2/6 per week from the same date.

In the Police Federation Election of Members to Serve on Branch Boards, held on the 17th October 1924, for D Division Sergeant 10 Ernest Elkins was duly elected.

General Order 27 of 25th February 1925 reveals that Ernest had been successful in the Examination for Promotion from Sergeant to Inspector although he was never promoted.

Ernest attended a week long course of instruction for Police Sergeants at Headquarters at Hatfield starting on 1st February 1926.

General Order 56 of 19th April 1926 informed Ernest that on the 26th April 1926 he was being transferred from C Division at Rickmansworth to A Division at Bishops Stortford and to occupy quarters vacated by Police Sergeant 68 Spicer. The Electoral Rolls of 1926 to 1930 list him as living at 90, Nursery Road, Bishops Stortford. On the day of his transfer Ernest was also given a pay rise from £5/7/6 to £5/10/0 per week.

General Order 117 of 29th August 1926 concerned the Emergency Regulations 1926 and instructions for 50 Hertfordshire Police Officers to be on standby should the Secretary of State call upon the County Force to draft men elsewhere. The first 20 named would be required to proceed at 8 hours’ notice or less. These included officers from A,B,C and D Divisions and it would appear to qualify to be amongst the 20 you needed to have a motor bicycle available. Ernest was one of the two Sergeants named amongst the 20. 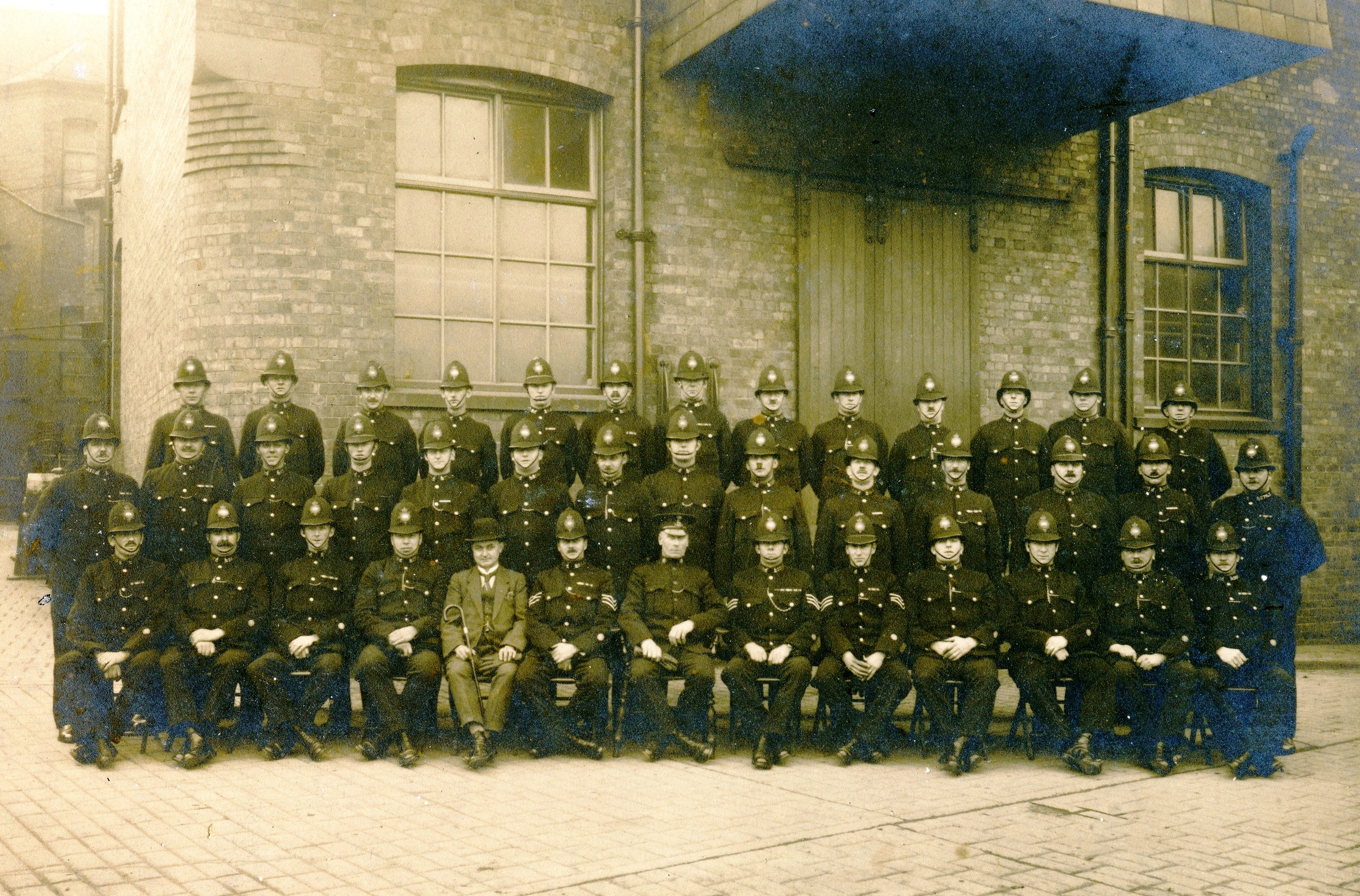 THE EMERGENCY POWERS ACT, 1926. THE EMERGENCY REGULATIONS, 1926.
COAL STRIKE
The Chief Constable is gratified to learn that the services of the detachment of the Hertford County Constabulary added temporarily to the Derby County Constabulary, were satisfactory, and he has much pleasure in publishing the following extract from a letter received from the Chief Constable of Derbyshire, under date 11th November 1926:
Begins: “The detachment has done very good work and I will be grateful if you will be kind enough to convey to them my warm thanks for their services. I may say that Inspector Digby did very good work indeed and was of great assistance to my Ilkeston Superintendent. Will you also give him my personal thanks”. Ends.

If this letter from the Derbyshire Chief Constable seems a bit luke warm it transpires 10 of the Hertfordshire Constables suffered food poisoning after eating food which was supplied to them on behalf of the Derbyshire Police Authority. The Hertfordshire Force Surgeon said that their illness should be classed as an injury on duty and the Chief Constable agreed and said no one should suffer any stoppages from their pay.

On the 24th July 1930 Ernest was cautioned by the Chief Constable after he failed to carry out some written instructions regarding damage to a wall.

Retirement And After The Police.

In the 1939 Register Ernest and his family are listed as living at 1, Thorley Park Road, Bishop’s Stortford and his occupation is given as retired Police and Clerk at Match Factory.

Ernest died on the 1st December 1966 at Bournemouth.