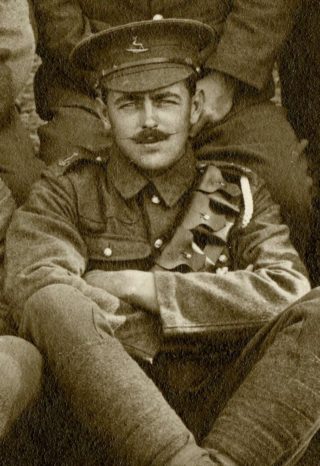 Archie William Corne was born on the 31st October 1892 at Waltham Abbey.

During the 1901 census the family were living at 29, Paradise Road, Waltham Abbey. By the time of the 1911 Census they had moved and were now living at 5, Railway Road, Waltham Cross. In 1911 Archie was employed as an assistant parcel carrier.

Little is known about his life over the next three years other than he was employed as a Porter at the Angel Road Station of the London Great Eastern Railway. He then applied to join the Hertford County Constabulary.

He gave his age on joining as 21 4/12 years and his date and place of birth as the 31st October 1892 at Waltham Abbey. His height was 5 feet 9 inches, his chest 37 to 38 inches, his complexion dark, eyes grey and hair dark brown. He had a scar on the back of his left wrist. He said he could ride a cycle but could not swim.

He said his religion was Church of England and gave details of his next of kin as his father, Charlie Corne of 5, Railway Road, Waltham Cross.

He was medically examined on the 26th February 1914 at Police Headquarters at Hatfield by the Police Surgeon who declared: I hereby certify that I have examined the above candidate as to his health and bodily strength and consider him fit for the Constabulary of this County. Signed Lovell Drage Surgeon. 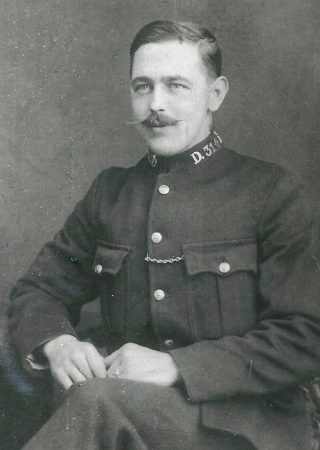 He was Attested before Frederic W. Anson J.P. and R. Cecil Peake J.P. at St. Albans on the 20th June 1914. On the same day he was taken onto the Roster and posted to C Division at Watford.

In November 1914 Archie passed his Ambulance certificate, an important qualification which entitled him to wear a badge on his lower left tunic sleeve to show he was trained in basic First Aid.

On the 13th November 1914 Archie was transferred from C Division at Watford to D at Tring. He was later reprimanded by the Chief Constable for being absent from his station without leave from 9 p.m. on the 12th to 6 a.m. on the 13th November 1914. The details are not recorded but clearly Archie must have believed that he need not work a night shift before moving house!

General Order 118 of the 21st July 1915 is a list of 96 officers which included the Chief Constable, 43 Constables who were Army reservists who were recalled and 50 Constables and 2 Sergeants who volunteered for military service. Archie is shown as PC 314 Corne A.W. D Division who enlisted in the Hertfordshire Yeomanry on the 10th June 1915.

Archie’s Army Service Record has partially survived and with his Medal Roll Index Card and Medal Rolls we know the following:
Archie William Corne aged 22 years 7 months enlisted on 12/06/1915 at Hertford into the 3/1st Hertfordshire Yeomanry as Private 2516 (later 105780 under re-organisation) signing up for 4 years Army Service. He was ‘embodied’ or taken on into the regular Army on the same date. His next of kin was given as his father Charles Corne, 5, Railway Road, Waltham Cross. He spent his first period of training at Colchester.

On the 22nd October 1915 he was posted to the 1/1st Herts Yeomanry and left ‘home’ as part of the Mediterranean Expeditionary Force. On the 16th November 1915 he landed in Gallipoli where he spent 157 days before leaving on the 27th March 1916.

On the 28th March 1916 he joined the Mesopotamia Expeditionary Force spending 2 years 290 days with them. On the 9th November 1918 he was taken ill with Malaria whilst still in Mesopotamia.

The County of Middlesex War Hospital Napsbury, St. Albans, Opinion of Medical Board.
Any disability claimed: Nil.
Present condition: No disability at present but has had malaria.
Attributable to service during the war: Yes.
Do Board find soldier to have suffered any impairment to health since his entry into the Service: Yes. He is liable to malaria.
Dated 22nd January 1919.

On the 19th February 1919 he was dis-embodied from the Regular Army and on the 22nd February 1919, he was Discharged from the Army. He gave his address as 65, Western Road, Plaistow, London, E13.

Like every other soldier Archie was granted 28 days leave on demobilisation. He would have used this time to arrange his re-joining of the Police. As part of that process he would have had to undergo a medical examination with the Force Surgeon at Police Headquarters at Hatfield. He was examined on the 30th January 1919.

General Order 26 of the 31st January 1919 announced the re-appointments to the Force of four Police Soldiers who had been released from H.M. Army. Archie was shown as PC 324 Corne A.W. posted to D Division at Tring from the 20th February 1919 at £2/7/0 per week. Each officer had to be formally re-attested. The Superintendents concerned had to report when this had been done showing the date and place of attestation and before whom taken.

His period of Army Service from the 10th June 1915 to the 19th February 1919 was deemed to count as Police Service for pension purposes Vide Standing Joint Committee Resolution 35 dated the 9th October 1914.

Archie was part of a detachment sent to Luton to help quell rioting between the 20th July and the 5th August 1919. 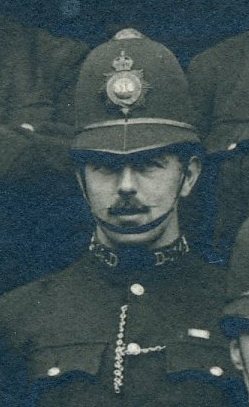 The Electoral Rolls of 1920 to 1924 list Archie and Eleanor Corne as living at 54, Bury Road, Hemel Hempstead.

General Order 143 of the 26th August 1924 instructed Archie that from the 4th September 1924 he was being transferred from D Division at Hemel Hempstead to A Division at Ware, to occupy the cottage being vacated by Constable 40 Bradbury. The Electoral Rolls of 1926 to 1929 list Archie and Eleanor Corne as living at 94, Watton Road, Ware.

Archie was accused of neglect of duty, that is to say he did without good and sufficient cause failed to submit a report in connection with a collision that occurred at Ware at 6.20 p.m. on the 5th January 1929. The Chief Constable disagreed as he dismissed the charge on the 26th February 1929.

However, on the 11th August 1930 the Chief Constable reprimanded Archie for what was described as discreditable conduct. Archie was said to have acted in a manner likely to bring discredit on the reputation of the force as he gave permission to a Mr. W. Huckle of 141, Ford Street, Hoddesdon to use the name Cornflower, the name he used in betting transactions with Messrs. Gardner & James Commission Agents of Westcliffe-on-Sea. Apparently Mr. Huckle tried to use the name on the 5th June 1930 when placing a horse racing bet with Messrs. Gardner & James. They declined to accept it and instituted enquiries into the matter.

In the 1939 Register Archie, who was shown as a retired Police Constable, and Eleanor and their children are listed as living at 94, Watton Road, Ware.