You are here: Home>Tags>PC Berry>Father & son from the Herts Constabulary in the 1800s

Father & son from the Herts Constabulary in the 1800s 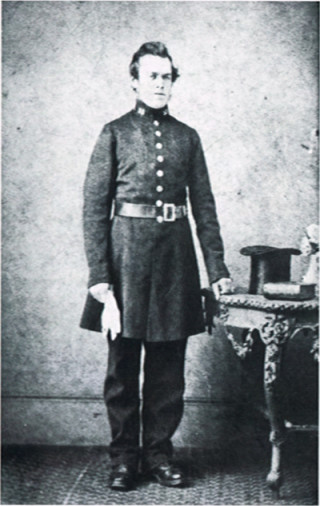 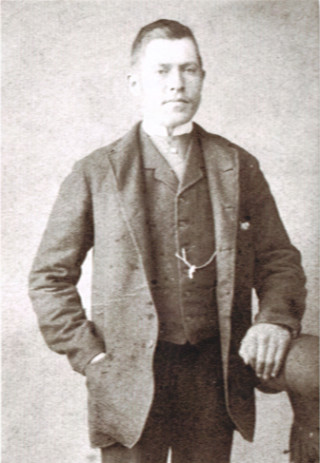 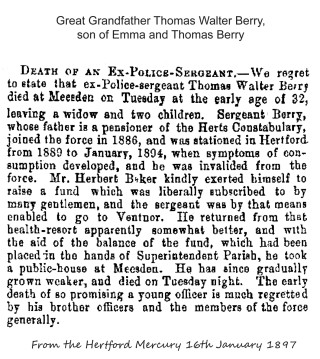 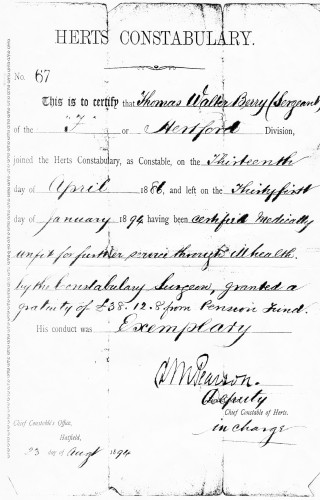 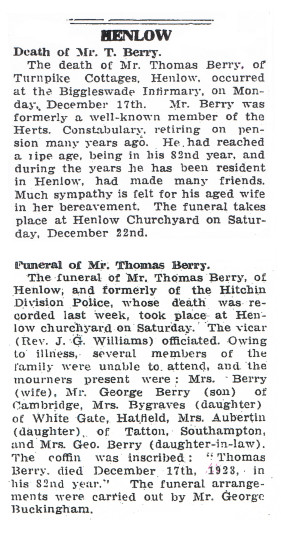 My great-great-grandfather, Thomas Walter Berry Snr, was born in 1841 in Aston, Hertfordshire. He was the second eldest of Abraham and Mary Maria Berry. Abraham was a farmer sometime during the 1850’s when he moved his family to Ashwell and became an innkeeper at Chalkmans Knoll beerhouse. Thomas and his older brother Abraham jnr. were both agricultural labourers at this time, but by the 1860s both men had joined the police force. Abraham went off to Ely while Thomas stayed in Hitchin.

Thomas married Emma Peters (his cousin) at Stevenage in 1864. They settled in Offley and had ten children. He retired from the force in 1883 aged 42. He became a gamekeeper shortly afterwards and was found at Snoddington Down Farm, Shipton Bellinger in Hampshire (I have yet to find a connection for this move) where their tenth child was born in 1886 and by 1891 they had moved to Wallington where according to the census he was a publican and was residing at the Harrow Inn with his wife, Emma, and four of their children. By the 1901 census Thomas had moved again, this time to Pulloxhill, Bedfordshlre as an innkeeper, whilst his wife Emma was at Kingston Hill,  London helping one of their daughters, Annle Rose Aubertin with her newborn baby. By this time most of the family had flown the nest and it seems that once Thomas had retired from the police force the family didn’t remain in one place for very long.

Thomas and Emma ended their days at Turnpike Cottage in Henlow, Bedfordshire where, after suffering from bronchitis. Thomas died at the good age of 81 in 1923 at the Poor Law Infirmary, Great North Road, Biggleswade. Emma died five years later and they are buried together at St Mary’s Church, Henlow.

Thomas’s eldest son, also called Thomas Walter was a Police Sergeant at Hertford. He had to retire due to TB (tuberculosis). With his retirement pay he bought a pub called the Beehive at Meesden, where he died aged 32, leaving a wife and two young children.

Before he died his police colleagues got together and generously paid for him to spend some time at the TB hospital at Ventnor, Isle of Wight.

A story about Thomas Walter Snr.

Night Poaching in Offley from the Hertford Mercury1871

John Seymour, aged 33, bricklayer, Frederick Simpson, aged 25, labourer, and John Trueman, aged 20, labourer, all of Luton, Beds, were charged with night poaching, armed with guns, at Offley, on the night of the 14th of December, 1870, in a wood belonging to F. Gosling, Esq.

George Payne, a gamekeeper working for Mr Richard Marsh at Offley, gave evidence that on that moonlit night he had heard a gunshot at about twenty minutes to one in the morning. He thought it came from his master’s land, so called out three other men. ‘While I was dressing, Police Constable Berry came to my house and said some guns had gone off in a wood close by. I went and fetched my night dog.’

The party went in search of the poachers, and came upon five men in Wellberry Wood. Three ran off, but two, recognised by Payne as Trueman and Simpson, stood to fight. Trueman put the muzzle of his gun against Berry’s chest. Payne said to Trueman, ‘Don’t shoot a man’, and Trueman responded by shooting Payne’s dog.

Berry  rushed at Trueman and they fell to the ground. Payne tried to keep Seymour away but the other three poachers had come back and Payne’s own men made themselves scarce. Payne was knocked down and Berry was struggling against four men.

Constable Berry appeared in the witness box with his head bandaged. He described what happened as he grappled on the ground with Trueman ‘Someone came up, hit me on the head and knocked me off him. I got up and was knocked down again with a gun. The gun exploded when they struck me with it. The charge did not strike me. I got up and was stepping back when I fell into the brushwood. Three or four men began beating me again with guns and sticks. They continued I should think for five minutes. I was on the ground all this time. When they left me I was lying down hardly sensible. I got partly up again when I saw a man come up to me and I believe he knocked me down again. They then went away from me. I lost a deal of blood. After they left me they went to the dog which they had shot and began beating it.’

In answer to the Judge’s question, Berry said, ‘I had my head laid open in three places down to the skull. I also had a bad wound in my leg. My eye was swollen up.’

In his summing up, Lord Chief Justice commented on the violence of the attack, although he thought that if Berry hadn’t knocked Trueman down he might not have provoked the poachers into retaliation! The jury found the two defendants guilty. The other poachers, who had confessed, were found guilty, and the whole crew appeared before the Lord Chief Justice for sentencing: George Fensome, George Burgess, George Wright, William Edmonds, John Seymour, Frederick Simpson and John Trueman.

‘His Lordship, in passing sentence, said: Prisoners at the bar, you have been found guilty, or have confessed yourselves guilty, of committing offences against the laws by going out at night, armed with offensive weapons in pursuit of game and in all these cases, save one, the offences against the law thus committed have been aggravated by the exercise of most brutal and cruel violence towards the keepers or persons appointed to watch and protect the game. Now, you seem to think in this county, I am sorry to say, you are not only at liberty to commit trespasses and offences against the Game Laws, but that when you are interfered with by the keepers, whose duty it is to protect the interests of their employers, you are at liberty to use brutal force and savage violence by attacking them in the way it has been proved you have done. This must be put a stop to, and I hope that the example I am about to make of several of you will have its due effect in teaching you and others that the law cannot be violated in this way, and that the lives and limbs of the keepers cannot be injured and outraged with impunity .’