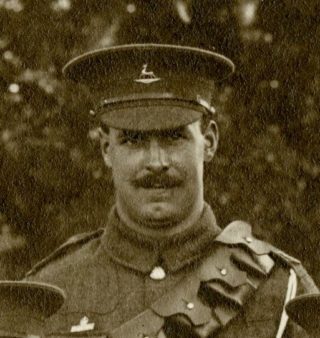 His parents were James and Jane Clark who married on 24th March 1884 at Thorley. His father was a Horse Keeper on a farm. They had 5 sons of whom Joseph was the fourth.

In the 1901 and 1911 census returns the family are to be found living at Moor Hall Cottages, Thorley. In 1901 Joseph was at school but by 1911 he was working as a farm labourer.

His Police Service Record has not survived but from General Orders we know the following. He was Appointed as Constable 189 on 8th February 1915 and initially posted for training to R Division at Headquarters.

General Order 59 of 10th April 1915 records that at the conclusion of his training he was transferred from R Division Headquarters to F Division at Hertford effective from 14th April 1915. On the same Order was PC 308 Frederick Clarke and it is safe to assume that they joined at the same time and would have known each other. The significance of this will be seen later.

General Order 118 of 21st July 1915 is a list of 96 officers, which included the Chief Constable, consisting of 43 Constables who were Army reservists who were recalled to the Colours and 50 Constables and 2 Sergeants who volunteered for military service.
Joseph Walter Clark is shown as PC 189 Clark J. W. ‘F’ Division who enlisted into the Hertfordshire Yeomanry on 3rd June 1915.

His Army Service Record also did not survive but from his Medal Roll Index Card, Medal Rolls and the UK, Army Registers of Soldiers’ Effects we know the following:
Private 2465 (later 105748 under re-organisation) joined the 1st/1st Hertfordshire Yeomanry and landed with them in the Balkans on 16/11/1915. During his service he was promoted to Lance Corporal. He survived the war and returned home awaiting demobilisation.
He was awarded the 1914-15 Star and the British War and Victory medals.
On the 11th February 1919 he died of Influenza. 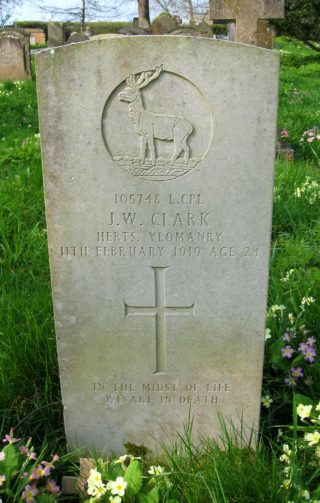 On the 15th February 1919 he was buried at St James the Great Churchyard, Thorley. His headstone is engraved “In the midst of life we are in death” – text selected by his mother.

General Order 42 of 15th February 1919 stated that “The Chief Constable regrets to announce that ex-PC 189 F Joseph Walter Clark who joined the Force on 8th February 1915 and enlisted in H. M. Army on 3rd June 1915 died at his home at Thorley on 11th February 1919 whilst awaiting demobilisation from Army.”