Paul Watts with thanks to Ian Whinnett 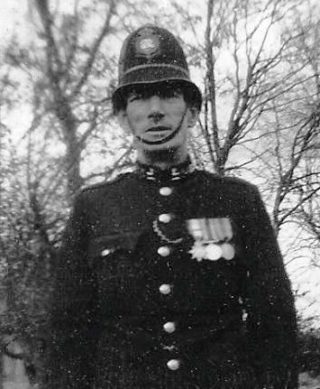 William James Shaw was born on the 23rd June 1887 at Notting Hill and baptised on the 10th July 1887 at St James’ Norlands Church, Notting Hill.

His father died sometime after he enlisted in the Army and his mother died in 1907 at Kensington.

His Army Service Record has survived and shows that he enlisted in London on the 12th May 1906 for Short Service of three years in the Colours and nine in the Reserve as Private 12703 in the 3rd Battalion, Grenadier Guards.

The following was recorded. He stated he had been born in Kensington, London and he was 18 years 11 months old. His occupation was a slaters labourer, he was not an apprentice, not married, had never been sentenced to imprisonment and was not already a member of the Military.

He stated his religion was Church of England and his next of kin were his father, James Shaw (later crossed through deceased), mother, Selina Shaw, elder brother John, sister Ellen and sister Jessie all of 31, Phoenix Place, Notting Hill.

On the 14th May 1906 he joined the 3rd Battalion, Grenadier Guards at London. On the 1st July 1906 he received his 3rd Class Certificate of Education.

On the 7th October 1907 Army Form B221, Descriptive Return of a Soldier Who is Desirous of Extending his Period of Army Service to 7 years was completed and the following recorded:
12703 Private William J Shaw of the 3rd Battalion Grenadier Regiment, Aldershot had served for1 year 5 months, his character was described as good, he had no Good Conduct Badges, had not been promoted and his Army Service was due to end on the 7th May 1918.

On the 9th October 1907 William successfully extended his Service to complete 7 years with the Colours.

It is not known what he was doing immediately after leaving the Army, but he spent some of the time applying to join the Police.

His Police Service Record has not survived but from other sources we know that William was Appointed on the 4th August 1913 as Constable 178. He would have undertaken his Probationary Training at Police Headquarters at Hatfield before being taken on the Roster. He was posted to ‘F’ Division at Hertford.

Published on the 16th May 1914 in the Hertfordshire Mercury:
At Hertford Borough Sessions, Alfred Harold Brendon, of 160 Queens Road, London pleaded not guilty to driving a motor-cycle at a speed dangerous to the public on 26th April. P.C. Crisford said that he had seen the defendant pass down Fore Street into Market Place at a speed of between 18 and 20 mph. He had a lady sitting on the back of the cycle. He had stopped in Bull Plain and the Constable had then gone up to speak with him and had taken his name. The road in Fore Street had been up at the time, and there had been a lot of people about. PC Shaw and Mr J.W. Jones corroborated. The defendant denied that he could ride on his machine at the speed alleged, particularly with a passenger, because, he said, “It was not powerful enough”. Ellen Castle, of 11 Thornton Street, who had been riding on the carrier, denied that the motor-cycle was going fast.

Published on the 27th June 1914 in the Hertfordshire Mercury:
At Hertford Borough Sessions, Henry Spinks of Green Street was summoned for being drunk and disorderly on 21st June. He pleaded not guilty. Police Constable Pitcher said that on the Sunday at 10.45 p.m., he had been on duty in Maidenhead Street at the scene of a fire when he had seen the defendant who had abused and used bad language towards the police and the firemen. The defendant had stood upon the hose and the witness had had to remove him. The defendant went away but returned a little while later when the witness had to get him away again. The defendant asserted that the witness had pushed him over and also denied that any bad language had been used. Inspector Thorne of the NSPCC gave corroborative evidence saying that the defendant was, with others, doing all he could to obstruct both the police and the firemen. Police Constable Shaw also corroborated. This defendant was fined £1 or 14 days, but Charles Webb, of St Andrews Street, was similarly summoned for obstructing the police. He pleaded guilty. Police Constable Hadder said that he had been at the fire helping to keep the crowd back because the crowd had become very disorderly. The second defendant, Charles Webb, had interfered and had put his fist in the witness’ face, and had threatened to fight. The Captain of the Fire Brigade had to get extra help because of the defendant’s behaviour. The witness said that the defendant was the cause of all the trouble that the police were having with the crowd. Harry Pamphilon, Captain of the Fire Brigade, gave corroborative evidence. He said that the crowd had been very objectionable and that he had had to complain to the police about it. The Clerk said, “You ought to have put the hose on them”. In answer to the Clerk, the witness said that the hose had been deliberately battered about and damaged. He also advised that some of the people there had said that the Brigade were no good, but that the ignorant fools in the crowd had done all they could to prevent the Brigade from achieving their objective. The Chairman said that the offence was very serious, and that this defendant would be fined 30 shillings or 14 days.

General Order 118 of 21st July 1915 is a list of 96 officers which included the Chief Constable, 43 Constables who were Army reservists who were recalled and 50 Constables and 2 Sergeants who volunteered for military service. William is shown as PC 178 Shaw W.J. F Division recalled to the 3rd Battalion, Grenadier Guards on the 4th August 1914.

On the 5th August 1914 William was Mobilised in London and a week later he landed in France with the 3rd Battalion, Grenadier Guards.

On the 11th November 1914 he received a gunshot wound to his back in action near Ypres. He was taken for treatment to the No. 8 Stationary Hospital at Rouen and then on the 20th November he was transferred to England.

William recovered from his wound and later in 1915 married Francis Annie Fortnum at Paddington. They had a daughter Frances Ellen G. in 1920 at Hatfield.

On the 31st May 1915 he was appointed as an unpaid Lance Corporal.

Then on the 6th October 1915 he embarked at Southampton for France and transferred to the 3rd Battalion, Grenadier Guards. On the 27th October he was appointed paid Lance Corporal.

On the 8th May 1917 he was appointed as an unpaid Lance Sergeant. On the 23rd June 1917 he suffered Appendicitis and was taken for treatment to the 3rd Canadian General Hospital at Boulogne. Three days later he left France aboard the Hospital Ship St Patrick.

On the 27th June1917 he arrived at the Headquarters Grouped Auxiliary Hospitals Central Registry in Exeter where he had surgery. The same day he was posted as an unpaid Lance Sergeant to the 5th Reserve Battalion, Grenadier Guards.

On the 5th July 1917 he was transferred to the Voluntary Aid Organisation Temporary Hospital at Honiton. He spent 64 days here as the wound healed slowly owing to deep sutures working out.

On the 5th April 1918 he relapsed and was admitted to The Queen Alexandra Hospital Extension with a Ventral Hernia from his old appendix wound. The Hernia was reduced but, on the 8th May 1918, he was transferred to the Guards Auxiliary Hospital at Basildon Park, Reading where his treatment continued for a further 28 days until the 4th June 1918.

Finally fit again on the 2nd August 1918 he returned to France and was posted as an unpaid Lance Sergeant to the Guards Base Depot. Three days later he was posted to the 1st Battalion, Grenadier Guards.

On the 8th August 1918 William was admitted to the No. 40 Stationary Hospital at Harfleur with mild Disorderly Action of the Heart. A month later he joined the Base Depot and was Medically Classified B1.

On the 8th October 1918 he was appointed paid Lance Sergeant 1st Battalion , Grenadier Guards, then 5 days later he was posted to the Composite Guards Garrison.

On the 31st December 1918 William embarked for the UK and on the 31st January 1919, he transferred to Class Z Army Reserve on demobilisation.

William was awarded the 1914 Star and the British War and Victory medals, with the Clasp and Roses. The family not only have William’s medals but the bullet which was removed from his back.

Like every other soldier William was granted 28 days leave on demobilisation and he would have used this time to arrange his re-appointment to the Police. He would have had a medical with the Force Surgeon to determine whether he was still fit enough for the duties of a Constable. The last day of his leave would have coincided with his date for re-joining the Police.

General Order 15 of 14th January 1919 announced that nine Police Soldiers, having been released from H.M. Army, would be re-appointed to the Force. William was shown as PC 142 Shaw W.J. ‘F’ Division at Hertford on £2/8/0 per week from the 13th January 1919. Each officer had to be formally re-attested. The Superintendents concerned had to report to Headquarters when this had been done.

Something of note in this Order is the change in his Warrant or Collar Number from 178 to 142. Prior to the outbreak of war, it was fairly common to issue the same Warrant Number to more than one individual providing they were posted to different Divisions so that the Divisional letter would differentiate between them. No record of an Order instructing that this should end and that Warrant Numbers should become unique has been found, but it was obviously issued simply by the fact of the number of returning Constables who were not given their old number, as someone else was already using it, and were issued with a new one.

General Order 40 of the 24th February 1920 referred to Order No. 35/1920 which has not survived. However, it is clear that Order 40 was an amendment and that a PC 321 Green P.J. of ‘F’ Division Hertford was to be transferred but PC 142 Shaw W.J. ‘F’ Division Hertford was to be transferred instead. As the Electoral Rolls of 1920 to 1924 list William and Frances as living at the Police Cottages, Hatfield it is apparent that William was transferred to Hatfield.

Details are scarce, but on the 25th May 1920, William attended the scene of a road accident in Hatfield. It involved Admiral Francis Martin-Leake of Marshalls, High Cross, Ware who was riding a motorcycle returning to duty at Portsmouth. He suffered severe head injuries, the serious nature of which, when coupled with an earlier head injury received during the war, although not apparent for a considerable time, eventually resulted in his becoming a permanent invalid and his early death on the 21st January 1928.

William’s assistance was obviously greatly appreciated as he was presented with a silver cup engraved with “Presented to Police Constable W.J. Shaw by Capt. F. Martin-Leake R.N. in gratitude for services rendered 25th May 1920”. 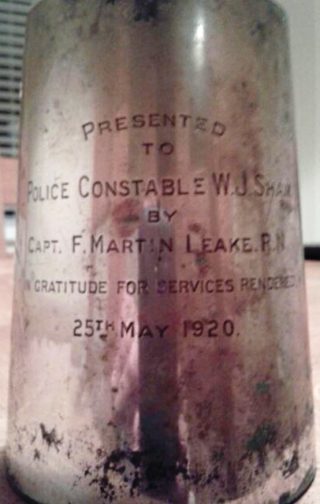 General Order 191 of the 20th November 1924 informed William that from the 1st December 1924 he would be transferred from ‘B’ Division at Hatfield to ‘A’ Division at Sawbridgeworth, to occupy the house vacated by ex-Constable Davis. The very next Order, 192/1924, altered the date of his move to Saturday 29th November 1924. The Electoral Rolls of 1925 to 1930 list William and Frances as living at 3, Springhall Road, Sawbridgeworth.

William retired as a Constable on the 4th August 1938.

In the 1939 Register William, who is recorded as being employed as a Hall Porter at the Local Government Office, is living with Frances and their daughter Frances at 6, Brickendon Lane, Hertford.