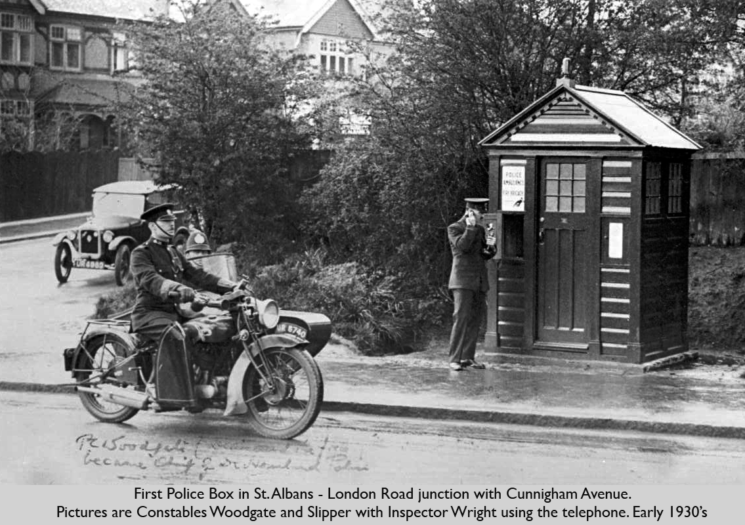 The 4th February 1931 saw the first motor patrol in St. Albans when a B.S.A. motor cycle combination was purchased and put into service. Many mechanical problems were experienced during the initial stages and thought had to be given to acquiring waterproof clothing for the officers on patrol. The motor patrols were soon to be a success and about the same time, traffic lights were installed in the city. St. Albans was the first in the provinces to have EVA (Electronic Vehicle Activated signals).

On February 9, 1980, Watford football club played Chelsea Advocate Ridge Road before a crowd of 25,000 people. A total of 52 persons were arrested in and around the ground for assaults on police, threatening behaviour, criminal damage and drunkenness. No police ofﬁcer was seriously injured as a result of these assaults, but one ofﬁcer sustained torn arm ligaments when a barrier collapsed. Of those arrested 48 were Chelsea supporters.

General Order 22 of 1925 relates to the discipline of Constable Wackett of E Division for being drunk on duty and unﬁt for duty. He was required to resign as an alternative to dismissal.
Discipline Acting Police Sergeant Cooling E Division charged with discreditable conduct in that he at Hitchin on 10 February 1925, knowing that Constable 161 Samuel Wackett was in an unﬁt condition to carry out any duty he may been called upon to perform did endeavour to shield him from disciplinary action. Found guilty and deprived of the rank of acting police sergeant. (General order 25 of 1925)