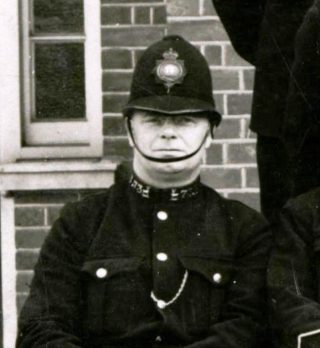 Horace William Human was born on the 13th September 1891 at Hemel Hempstead.

His father, Alfred Human a bus driver and conductor married his mother, Selina Hawes on the 23rd October 1881 at Gaddesden. They had eight children all born in Hemel Hempstead:

Little is known about Horace’s life over the next three years other than his father died in 1912 at Hemel Hempstead. Then he applied to join the Hertford County Constabulary.

Horace’s Police Service Record has not survived but from other sources we know he was Appointed as Constable 73 on the 10th August 1914 on £1/4/6 per week. He would have undergone his Probationer training at Police Headquarters at Hatfield. At the completion of his training he would have been Attested and taken on to the Roster and posted to a Division. It is believed that he was posted to F Division at Hertford.

Published on the 4th September 1915 in the Hertfordshire Mercury: At Hertford Borough Sessions on Thursday, John Wright, 37, of The Folly, and William Lawrence, 29, of 4, Davies Street, greengrocers, were summoned for obstructing the highway in Maidenhead Street by leaving a barrow therein for an unreasonable time and preventing people passing along. The defendants said they never left the barrow. PS Palmer stated that at 9 p.m. on Saturday he received complaints about the defendants and kept observation on them. He saw them remain outside Walker’s Stores hawking fruit for a quarter of an hour. Lawrence was serving fruit and Wright pushing the barrow. They were obstructing the street, which was very full of pedestrians. Lawrence had previously been cautioned and told that he was not allowed to stand in the street with a barrow. The defendants admitted that they were up and down the street, but thought they were doing no harm in selling a bit of fruit.  PC Human corroborated the Sergeant as to the obstruction of the road and footpath. Supt. Pear said he had frequently received complaints from the shopkeepers in Maidenhead Street that they could not transact their business inside on account of the shouting outside. The defendants were fined 5 shillings each.

General Order 124 of the 18th November 1917 was a list of 16 Constables, including Horace, who had signified their desire to sit the examination for promotion from Second Class to First Class Constable. The necessary examination papers were prepared and forwarded to the Superintendents concerned. The examination was held in accordance with the rules laid down in Order 192/1915.

General Order 137 of the 21st December 1916 announced the result of the Examination for Promotion from Second Class to First Class Constable. Horace was not one of those that qualified. He would have had to re-sit the exam but the record of when has not survived.

Horace’s Army Service Record has survived and from this we know the following: William enlisted on the 10th December 1915 at Hertford and on the 11th December 1915, he was transferred to Section B Army Reserve and returned to his Police duties. This was part of what was known as the Derby Scheme. Thousands of men around the country including dozens of Hertfordshire Police Officers enlisted under the scheme. The Hertfordshire Officers mainly enlisted between the 9th and the 11th December 1915. Every Section B Reservist was issued with an individually numbered Khaki Armlet with a red Crown displayed on it which was to be worn on the upper left arm to demonstrate they were a Reservist and were waiting to be mobilised.

The following was recorded: He gave his address as Sele Grange Lodge, North Road, Hertford, his age as 24 years 2 months and his trade as Police Constable. He said he was married and had never served in the Military before.

On the 23rd April 1918 Horace was one of fifteen Hertford County Constabulary Police Constables who were Mobilised at the same time. Five joined the Coldstream Guards and ten, including Horace as Guardsman 32195, joined the Grenadier Guards. They were given consecutive Army Service numbers. The others were 32193 William Sturman, 32194 Charles Spencer, 32196 James Childs, 32197 Frederick Futter, 32198 George Reed, 32199 Thomas Abrathat, 32200 George Cooling, 32201 Leonard Wackett and 32202 George Berry.

Other than perhaps their initial training there is no evidence to show that they served together. The end of the war arrived before Horace could be posted overseas and consequently, he did not receive any medals. On the 16th January  1919 he was transferred to the Army Reserve. On the 31st March 1920 he received his final discharge.

Like every other soldier Horace would have been granted 28 days leave on his demobilisation and he would have used this time to apply to re-join the Police. He would have had to have undergone a Medical Examination by the Force Surgeon to ensure that he was still fit enough for Police duties. Having passed this, he would have been re-Appointed on the day following the date of the end of his leave period.

General Order 5 of 6th January 1919 listed 13 Police Soldiers who having been released from H.M. Army were re-appointed to the Force with effect from the dates shown. Horace was shown as PC 73 Human H.W. of F Division at Hertford on 2nd January 1919 on £2/7/0 per week. Each officer had to be formerly re-attested. Superintendents concerned had to report to the Chief Constable when this has been done, showing the date and place of Attestation and before whom taken. The 1919 and 1920 Electoral Rolls list Horace and Mildred Human as living at 28, New Road, Hertford.

General Order 20 of 19th January 1919 was entitled Allowances to wives of Police Soldiers. It announced that the Chief Constable had considered the position of each individual Police Soldier under the new scale of pay and found after taking into consideration the total income of the family from allowances, including the value of the soldier’s food and clothing, that in 16 cases the families were in a worse financial position then they would have been had the man remained in the force. These cases were put before the Standing Joint Committee and they authorised extra payments, with effect from 1st July 1918. PC Human H.W. F Division was awarded £0/0/5 extra per week with £0/11/0 to be paid retrospectively with the allowances for the week ending 22nd January 1919. 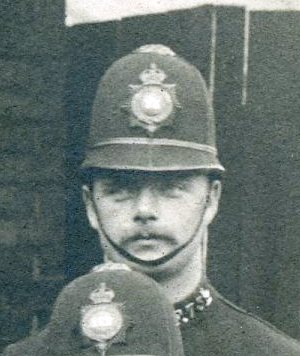 General Order 46 of the 29th March 1921 instructed Horace that from the 6th April 1921 he would be transferred from F Division at Hertford to C Division at Croxley Green and to occupy the house being vacated by PC 204 Hagger. The 1921 to 1928 Electoral Rolls record Horace and Mildred Human as living at 252, New Road, Rickmansworth. In 1925 a George Berry, possibly PC 303, was also listed as living there.

The record has not survived but the 1930 Electoral Roll lists Horace and Mildred Human as living at 2, Watton Road, Ware which was the Police Station, so he had clearly been transferred to A Division.

Published on the 30st January 1931 in the Hertfordshire Mercury: William George Tant, 8, Merville Street, Bow was summoned for using a steam lorry which made an excessive noise at Ware, on December 16, 1930. Frederick William Barker, 181 Burdett Road, Bow was also summoned for permitting the use of the lorry. PC Human proved the case and defendants were fined 10 shillings each.

Horace appeared in a large group photograph of Police Officers taken in 1933 outside Hertford Grammar School, the reason why the photograph was taken is unknown.

Again, the record has not survived but the following newspaper articles show that at some time Horace was again transferred this time to B Division at Welwyn.

Published on the 28th July 1939 in the Hertford Mercury under the headline Welwyn Police Court. Farmer Fined for Careless Driving: An accident on Brickwall Hill, Great North Road, Welwyn Garden City, on June 22, resulted in Gerald Angell, a famer, of ‘Whitby’, Ashwell near Baldock, being summoned for driving without due care and attention. Angell pleaded not guilty. PC H.W. Human, of Welwyn, said he visited the scene of the accident, where he took certain measurements. Angell made a statement to witness in which he was alleged to have said that at 8.15 p.m. on June 22 he was driving his sister’s car from Hatfield towards Welwyn. His speed was 13 – 20 mph and there was a lorry travelling north in front of him. The driver gave him the signal to overtake and whilst he was overtaking the lorry moved into the centre of the road, causing him to collide with a car which was travelling at a ‘terrific rate’. If the car had been travelling at a normal speed the accident could have been avoided. The driver of the lorry, Martin Maddock, of 10 Camperdown Avenue, Burradown, Dudley, Northumberland said he was overtaking a car and put out his hand to show his intention to do so. Ernest Wallack, of Finchdale Abbey Hotel, near Durham, said he was driving towards London at a speed of between 50 and 60 mph. Coming down the hill he saw the car overtake the lorry which was passing another vehicle. He had to drive over a stone kerb on to a grass verge to avoid a head on collision. Angel, on oath, said that the driver of the lorry gave him the ‘all clear’ signal. He commenced to overtake when he was forced by the lorry coming out into the middle of the road, to go over slightly into the traffic lane on his offside. When he saw the car driven by Wallack he kept going as he thought there was room for both cars. Wallack’s car was ‘wobbling’ a little over from its nearside. Angell was fined £2/0/0 with £6/1/0 costs. He was allowed 28 days in which to pay.

Published on the 18th August 1939 in the Hertford Mercury under the headline Police Retirements: Two members of the Hertfordshire Constabulary who have been stationed in the Welwyn district, are retiring after 25 years’ service. They are PC H. Human, who, before going to Welwyn nine years ago, was at Ware, Croxley Heath Green and Hertford, and PC W.J. Thurley who had been stationed in Welwyn Garden City for four years following service at Watford and Hertford.

In the 1939 Register recorded as living at 10, Heathbrow Road, Oaklands, Welwyn are Horace Human who is employed as a Store Detective and his family.

Horace’s wife Mildred died in 1954 at Chichester and in 1955 he married Elizabeth J. Smith at Hatfield.