A Casualty of War

By Hilary K, with many thanks to Bertie's grandson John Webb for the photos and documents 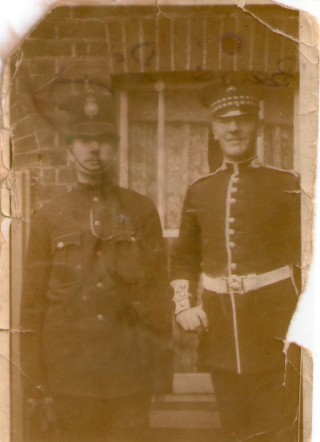 Herbert George Dolley, “Bertie”, was a Constable in B Division, Bishop’s Stortford from 1908 to 1914.

On reserve from the Army, he was recalled in 1914 and was tragically killed in action on Christmas Day 1915. 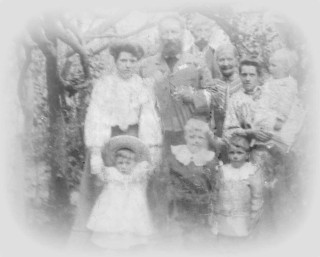 Bertie (bottom right) with his family
Bertie was born in September 1887, the son of Frederick and Mary Ann Dolley. The 1901 census shows the family was living in Hertingfordbury; Frederick was a domestic gardener, and the 13 year old Bertie is listed as a Cow Boy. 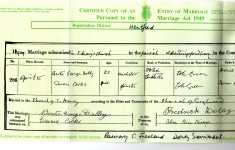 Marriage certificate - right hand side
Bertie joined the Hertford Constabulary in 1907/08 and in 1909 he married Emma Cocks in St Mary’s Church, Hertingfordbury. They had 4 children in the next 5 years – the youngest was only a few months old when Bertie went to war. 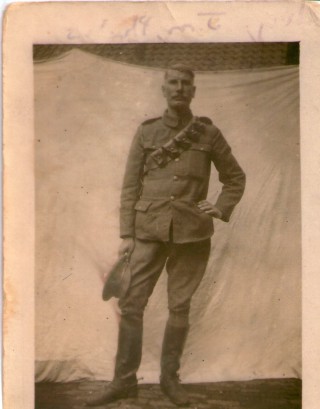 Bertie was called back into service in 1914, and became a gunner with the Royal Garrison Artillery of 48th Heavy Battery, stationed near Brighton prior to embarkation from Southampton.

By August 17th 1914 Bertie (Gunner 19963) was in France as part of the 3rd Division of the British Expeditionary Force supporting the French Army  around Mons. His battery consisted of four of only sixteen heavy guns (sixty pounders) of BEF in France at that time.

Bertie was the groom of the Battery Commander, Captain Rupert B. Peters.

On Christmas Day 1915 Bertie left a cellar, in which he was taking cover, to wake two men who were sleeping in a nearby barn. Tragically, a shell hit the barn while he was there. Bertie and 19 year old Mathias Mostyn died of their wounds later that day, and Joseph Anderson died two days later.

All three were buried side by side at Louvencourt Military Cemetery.

A letter to Hertingfordbury 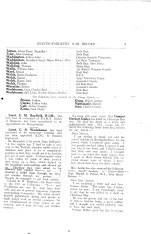 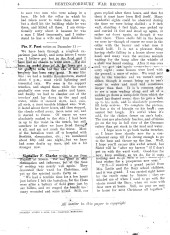 Hertingfordbury War Record - letter from Captain Peters
Captain Peters sent the letter on to Mrs Leslie, along with a letter about Bertie’s death, in which he calls Bertie “one of the best of fellows, besides being a good soldier”.

Both were reproduced in the Hertingfordbury War Record in February 1916.

A letter from the Herts Constabulary 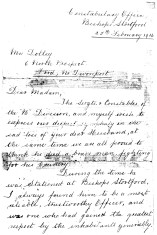 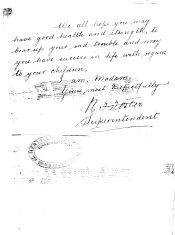 Superintendent's letter - 2nd page
The Superintendent of B Division, Bishop’s Stortford, wrote to Bertie’s wife, Emma, in February 1916 offering condolences from the Sergeants, Constables and himself on Bertie’s death.

He says: “we are all proud to think he died a brave man, fighting for his country”.

It can be seen from the Hertingfordbury Roll of Honour, published in the Hertingfordbury War Record of February 16, that Bertie’s brother Leonard had also been killed in action, a year earlier. Leonard was also a member of the Hertfordshire Constabulary and the newspaper report of his death is on this website at http://www.hertspastpolicing.org.uk/page/police_constables_death_in_action.

A third brother, Thomas, was serving in the Beds Regiment. 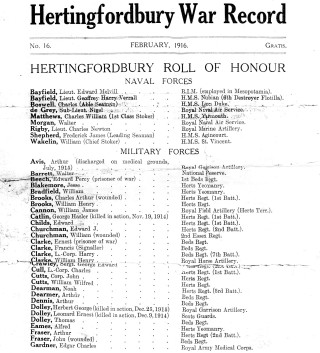 When Bertie died, his wife Emma and four young children were living in Plymouth. His two sons were sent to The Duke of York’s Royal Military school as the sons of a fallen soldier and his two daughters went into service as soon as they were old enough.

Emma married again and went on to have three more children. 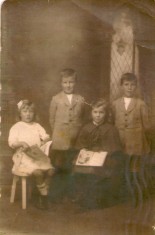