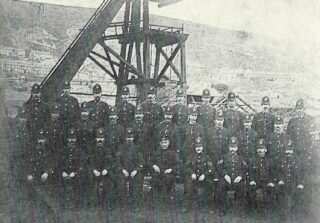 Gilfach Goch was a small coal mining village in the Borough of Rhondda Cynon Taf, South Wales. The Miners’ Strike of 1910-11 was an attempt by miners and their families to improve wages and living conditions in severely deprived parts of South Wales, where wages had been kept deliberately low for many years by a cartel of mine owners. What became known as the Tonypandy riots of 1910 and 1911 (sometimes collectively known as the Rhondda riots) were a series of violent confrontations between these striking coal miners and police that took place at various locations in and around the Rhondda mines of the Cambrian Combine, a cartel of mining companies formed to regulate prices and wages in South Wales.

General Order 16 of the 1st July 1911 announced the following to all Superintendents: The undermentioned Detachment of this Force will proceed to Cardiff on Wednesday 5th July 1911 for duty.

The Deputy Chief Constable will superintend the departure from Paddington Station. The detachment will parade in Paddington Station at 11 a.m. on 5th July. The train will leave at 11.30 a.m. arriving at Cardiff at 2.22 p.m. Every man will take a change of clothing, second suit of uniform, great coat, helmet, cape, leggings, night belt and lamp, truncheon & warrant card, whistle and chain and handcuffs. PC Reynolds will act as Clerk to the Detachment. The men detailed for duty have been carefully selected and any neglect of duty or misconduct tending to bring the Hertfordshire Constabulary into disrepute on the part of any Officer or Constable of the detachment while on duty in another County will meet with the severest notice of the Constable. Special arrangements will be made for the payment of fares to and from Cardiff. Inspector Sullivan will be given a special advance from which he is authorised to pay back officers a sum not exceeding 5/- per week and this advance will also be available for any necessary expenditure of an extraordinary nature. Receipts to be submitted to the office. The wives of officers proceeding with the Detachment will be paid £1 per week from the officers pay during their absence. Food and lodgings will be provided. 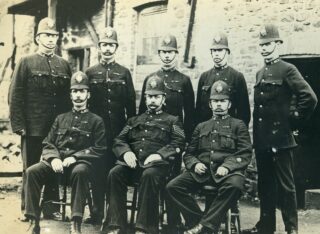 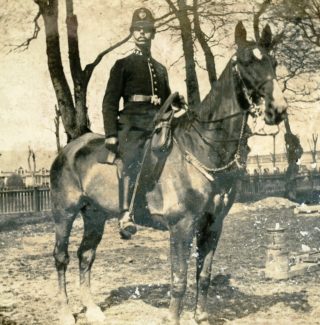 Although not included in the General Order quoted above this photograph is recorded as showing Hertford County Constabulary PC 47 James Woolnough as being on duty at Gilfach Colliery.

Another Deployment To South Wales?

There is no record that these men were actually sent to South Wales possibly, as can be seen in the following newspaper article, the strike ended a few days later.

Published in the Musselburgh News on Friday 23rd July 1915 under the headline Notes From Westminster. The End of the Coal Strike: The end of the coal strike has come. It should never have begun. The most eloquent praise Mr Lloyd George’s public speech on the subject is his aspiration that the memory of it may be buried deeply as deep as the bottom of any pit in Wales. There are several remarkable circumstances which must, however, be touched upon before this painful episode in war history can be dismissed. First let it he acknowledged that strikers were influenced more by belief, rightly or wrongly held, that owners were making largely increased profits from die war. Secondly, let it be admitted also that as their agreement stood fur recoil’ sideration at this date awl they would if the war had not happened, have gained permanent advantages in pay, it was hard upon them that they should be asked to accept increase for the period of the war only. It ‘ was harder because when the war ends presumably there will be a surplus of coal and an over-supply of workers and the owners would have the pull in the matter of new agreements. But when these allowances are made the fact remains that the strike was ill advised and damaging to the reputation of loyal and patriotic Welshmen. The most curious thing is that the prime movers in this agitation were Englishmen who are officers or prominent orators in labour organisations. Welsh leaders whose very names indicate their identity with Wales either argued against the strike or for moderation in demand with just a possibility of a strike shadowed forth.

A Deployment To West Riding.

(Abridged) Published in the Sheffield Daily Telegraph on Thursday 31st March 1921 under the headline Miners Desperate Throw. Threat to Imperil the Safety of the Pits. Sir Robert Horne Firm. No Subsidising of Coal Industry at the Expense of the Public: There was no settlement of the coal crisis last night. The miners’ leaders have decided to withdraw all workers from the pits regardless of the safety of the mines. Sir Robert Horne, referring to this grave statement, “could scarcely believe that the coal workers of the country would allow their means of livelihood to perish, as undoubtedly must result in many coalfields if the pits were to be flooded.” Mr. Hodges presented the ultimatum of the miners – State subsidy and pooled profits. He was taken aback at the firm response of Sir Robert Horne. Sir Robert refused to subsidise the coal industry at the expense of crippled industries much worse off. It is, indeed, quite clear that neither side need expect either financial or legislative aid from the State. Figures are available of what the proposed new formula means in deductions. In South Yorkshire, the, miners’ wages would remain the same, and round Barnsley it might actually work out as a rise in wages. This last ” desperate throw ” of the Miners’ Executive is taken to suggest that it knows it cannot maintain a long strike and so the extremists are playing their final card by threatening the safety of the mines. Whitehall thinks work will cease generally at midnight and will be resumed in a few days, since no substantial difference exists save on the men’s demand that wages shall be fixed nationally.

The records as to where and how many detachments were sent to West Riding have not survived and it would seem that by the lack of records that there was nothing of note which occurred. 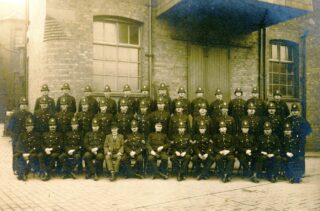 The General Strike. Deployment to Ripley.

General Order 140 of the 18th October 1926 was entitled the Emergency Regulations, 1926 and announced the following detachment of the Hertford County Constabulary is detailed for duty in the County of Derby as from 19th October 1925, inclusive:

The detachment will proceed by nearest railway route to St Pancras, London Midland & Scottish Railway, reporting on the main departure platform at 2 p.m., when Inspector Digby will parade the party and call the roll.

The detachment will proceed by the 2.25 p.m. train to Derby. On arrival at Derby, Inspector Digby will report to the representative of the Chief Constable of the Derby County Constabulary who will meet the train and provide omnibus transport to Ripley about 10 miles distant.

Divisional Superintendents will advance Railway fares if required and an account for same will be rendered to Headquarters Office for repayment.

Inspector Digby will render a daily report direct to the Chief Constable’s Office each day, showing state of health of all members of the detachment and any matters of interest which may occur.

Inspector Digby had little to report as this deployment was incredibly quiet and he resorted to informing the Chief Constable about the local Derbyshire weather forecast. The fact that little happened was just as well as Inspector Digby commented that Derbyshire Constabulary were behind the times and provided him with little instruction as to what they were required to do. The detachment returned to Hertfordshire on the 12th November.

General Order 157 of the 14th November 1926 was entitled The Emergency Powers Act, 1926. The Emergency Regulations, 1926. Coal Strike and announced the following: The Chief Constable is gratified to learn that the services of the detachment of the Hertford County Constabulary added temporarily to the Derby County Constabulary, were satisfactory, and he has much pleasure in publishing the following extract from a letter received from the Chief Constable of Derbyshire, under date 11th November 1926:

Begins: “The detachment has done very good work and I will be grateful if you will be kind enough to convey to them my warm thanks for their services. I may say that Inspector Digby did very good work indeed and was of great assistance to my Ilkeston Superintendent. Will you also give him my personal thanks.” Ends.

The Police Federation Constables Branch Board Meeting held at Constabulary Headquarters on Friday 28th January 1927 reported on Sickness. It was agreed that the Chief Constables attention be drawn to the fact that certain members of the Force whilst on strike duty at Ilkeston, Derbyshire, were poisoned by food supplied through the Derbyshire Police Authority which necessitated their being placed on the Sick List through no fault of their own, and whilst so sick were put under stoppages of pay. The Chief Constable noted: Under the proviso to Police Regulations No. 89, the circumstances under which various members of this Force performing duty in Derbyshire, were placed on the Sick List through eating food which was supplied to them on behalf of the Derbyshire Police Authority, has been referred to the Staff Surgeon, who recommends that in the following cases, the sickness be treated as an injury received on duty, viz: PC 104 Snoxell B Division, PC 179 Smith B Division, PC 9 Emery B Division, PC 329 Smith C Division, PC 59 Fordham D Division, PC 15 Geary E Division, PC 320 Collett E Division, PC 137 Dowty E Division, PC 61 Burgess E Division, PC 106 Radford E Division. The Chief Constable approves the recommendation of the Staff Surgeon and directs that where stoppages have been made from the pay during the sickness of the Constables named above, that an appropriate refund shall be made.

It is understood that in fact a total of 27 of the men went sick with enteritis having been provided with a rabbit stew for their lunch.