Paul Watts with thanks to Angie Siddons 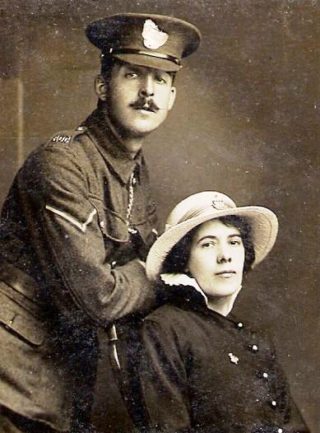 William Edward Wand, who was known as Claude, was born on the 5th March 1890 at St. Swithins, Lincoln and baptised there on the 27th March 1890.

Later that year though William applied to join the Hertford County Constabulary.

William’s Police Service Record has not survived but from other sources we know he was Appointed on the 28th December 1911 as Constable 30 at C Division at Kings Street, Police Station, Watford. His Probationer training would have been carried out by a senior experienced Constable under the supervision of the Divisional Superintendent.

General Order 1 of the 5th January 1912 announced that Probationer Wand 30 C is appointed on the strength of the Force on 23/11 per week from 28th December 1911 inclusive.

William married Ethel Winifred Smith on the 27th July 1914 at St. Albans. They had a son Kenneth Claude born in 1918.

The 1915 Electoral Roll list are William and Ethel Wand as living at 17, Cassio Hamlet, Watford.

Constable Gatehouse had been a Blacksmith before joining the Police and as William was the son of a Blacksmith, there is a distinct possibility he could have learnt the trade from him, which may explain what their qualifications not possessed by ordinary recruits were.

General Order 118 of the 21st July 1915 is a list of 96 officers which included the Chief Constable, 43 Constables who were Army reservists who were recalled and 50 Constables and 2 Sergeants who volunteered for military service. William is shown as PC 30 Wand W.E. C Division who enlisted into the Army Ordnance Corps on the 6th April 1915.

William’s Army Service Record has not survived but from his Medal Roll Index Card and Medal Rolls and notes made by William himself we know the following: He enlisted at Woolwich on the 3rd April 1915 in the Royal Army Ordnance Corps as Private 05754. He was promoted to Lance Corporal on the 1st May 1915.

On the 3rd May 1915 he was posted to Weedon Ordnance Depot in Northampton. On the 28th June 1915 he left England at Devonport for Egypt which contradicts his Medal Roll Index Card which states he left on the 30th June for France. On the 10th July 1915 he arrived in Alexandria, Egypt. The family believe that he then served in Gallipoli.

On the 3rd February 1918 he transferred to the 1/5 Bedfordshire and Hertfordshire Regiment and was promoted to Acting Corporal 48187. The Hospital admission and discharge registers record that on the 23rd June 1918 Lance Corporal 48187 W.E. Wand 1/5 Bedfordshire Regiment was suffering from debility and was transferred from No. 24 Stationary Hospital to the 19th General Hospital at Alexandria.

On the 28th August 1918 he arrived at Ludd a railway hub now Lod in Israel. Two days later he arrived at Sarona now a neighbourhood of Tel Aviv, Israel. On the 1st March 1919 he embarked for Blighty.

On the 4th March 1919 he arrived in Taranto in Southern Italy and two days later he left, and it is assumed he then travelled by train to St. Bernards, France arriving on the 9th March. The next day, the 10th March, he arrived at Lyon and then St. Germain, France leaving there the same day.

The only remaining record is that he was transferred to Class Z Army Reserve on the 14th April 1919. He was awarded the 1914-15 Star, the British War and Victory medals.

Like every other soldier when he was demobilised William was granted 28 days leave. He would have used this time to arrange his re-joining of the Police. Part of this process would involve him being medically examined by the Force Surgeon to ensure he was fit enough for Police duties.

General Order 74 of the 21st March 1919 announced the re-appointments to the Force of five Police Soldiers who had been released from H.M. Army. William was shown as PC 27 Wand W.E. posted to C Division at Watford from the 27th March 1919 at £2/10/0 per week. Each officer had to be formally re-attested. The Superintendents concerned had to report when this had been done showing the date and place of attestation and before whom taken.

Something of note in this Order is the change in his Warrant or Collar Number from 30 to 27. Prior to the outbreak of war, it was fairly common to issue the same Warrant Number to more than one individual providing they were posted to different Divisions so that the Divisional letter would differentiate between them. No record of an Order instructing that this should end and that Warrant Numbers should become unique has been found, but it was obviously issued simply by the fact of the number of returning Constables who were not given their old number, as someone else was already using it, and were issued with a new one.

The Electoral Rolls of 1919 to 1921 list William and Ethel Wand as living at 17, Cassio Hamlet, Watford.

William was part of a detachment sent to Luton to help quell rioting between the 20th July and the 5th August 1919. 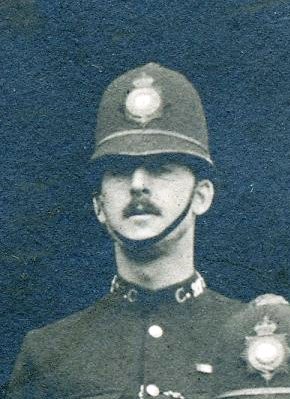 Obstruction Of The Highway.

Published on the 4th June 1920 in the Harrow Observer under the headline Obstructing The Highway: George Page, Hawthorne Villa, High Street was summoned at Watford Sessions last week for obstructing the highway. Police Constable Wand deposed that on May 7 he was on duty in Lower High Street, Watford and at 4.15 p.m. saw a motor car standing outside Mr. Child’s shop directly opposite the entrance to Carey Place. He kept observation on the car and at 6 o’clock asked some workmen who it belonged to. They told him it belonged to defendant, who was in the office. Witness then went and saw defendant. A fine of 10s was imposed.

General Order 46 of the 29th March 1921 instructed William that he was being transferred from the 6th April 1921 from C Division at Watford to A Division at Cottered to occupy a vacant cottage. The Electoral Rolls of 1921 to 1926 record William and Ethel Wand as living at Cross Green, Cottered.

A Spot Of Trouble.

General Order 116 of the 3rd September 1922 announced that on the 1st September 1922 William was disciplined by the Chief Constable for omitting to attend his 2 a.m. conference point at Ardeley Church, Ardeley on the night of the 21-22nd August 1922 and making an incorrect entry in his journal. He was ordered only to be reduced one grade of pay for one year. Apparently, he could have been dismissed but as he had served in the War and his last offence had been on the 26th October 1914 he was not.

General Order 62 of the 4th May 1926 concerned the Emergency Regulations of 1926 and instructions for 50 Hertfordshire Police Officers, made up of three Inspectors, seven Sergeants and 40 Constables, to be on standby should the Secretary of State call upon the County Force to draft men elsewhere at short notice. These included officers from A,B,C, D and E Divisions. Orders for equipment and clothing would be issued if and when necessary, but the men were advised that they would require some sort of haversack. William was one of the Constables named in the list.

It is believed that William left the Police at some time in the following months, but the reason why is not known. No mention of him exists in the Pension Records which would indicate that he left for a medical reason prior to completing the 25 year qualification period. He must have left though prior to the 27th October 1926 as his Warrant number was reallocated to another officer on that date.