Neil Osborn - from 'The Story of Hertfordshire Police' 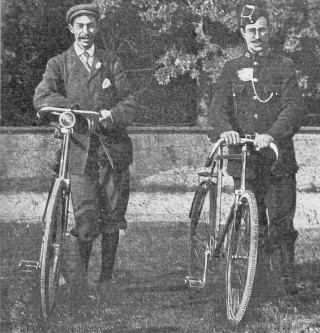 The Hertfordshire Police Cycle Corps  (The Scorchers) was established by Chief Constable Daniell in 1899.

The officer in uniform, in the photograph, is Constable Robert Beecroft.

Note : The name ‘Scorchers’ was probably taken from the nickname given to the trendy new ‘sport’ by anti-social speeding cyclists in New York City around 1890, who terrified and endangered residents.

Police commissioner Teddy Roosevelt approved the formation of a “Scorcher Squad” ; four men who were tasked with catching and prosecuting these speeding cyclists.

Considered a success, the scorcher squad eventually expanded to include 100 officers.