You are here: Home>Police History>Oral Testimonies>Robert Lee joined the Hertfordshire Constabulary in the late 1940's.

Robert Lee joined the Hertfordshire Constabulary in the late 1940's.

Robert Lee was interviewed by Michael Hall on behalf of the Bishop’s Stortford Museum's and HALS Oral History Project ‘On the Beat’. 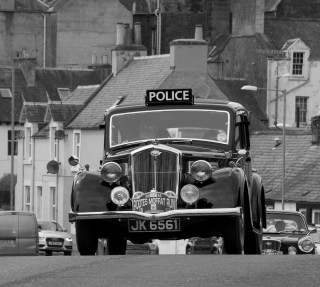 Robert Lee joined Hertfordshire police force in the late 1940s. He described some of the routines of his working day. As well as the car he drove Wolseley Motors (a British motor vehicle manufacturer founded in early 1901), but his usual transport was a push bike or walking. Amongst other things he looked back on police equipment and accessories that he used in late 1950s.

M.H.: So did you carry handcuffs?
R.L.: Yea, always, truncheon and hand cuffs.
M.H: Truncheon and handcuffs. Did you have a whistle?
R.L.: Oh yes, we all had a whistle.
M.H: On a chain?
R.L.: Yea, but that was, well at night time too you know we carried a whistle.
M.H :So, if something happened and you needed help, what did you do? How did you get help?
R.L.: Yea, you could blow the whistle…
M.H: Tell me about the motor patrol. What sort of vehicle? Tell me about that.
R.L.: Well, the driver was an experienced driver, experienced with going to all these things, well you just got called out, as you were on a motor you went there first.
M.H: How did you get called? Did you have a radio?
R.L.: Oh yea, a two-way radio. It was quite efficient.
M.H: Do you remember what sort of car it was.
R.L.: Wolseleys.
M.H: Big cars? Big Wolseley?
R.L.: They had 2 or 3 sizes, you know, the actual patrol cars, and one or two – especially in a small villages.
M.H: So, you operated the radio, did you, you were the radio operator in the Wolseley. If you had a driver?
R.L.: Well, if you were on the motor patrol as such you had a driver, the driver and one more, so two of you. There were two of you. But of course if you were just going somewhere, to pick somebody up, it was totally different, you know.
M.H: And do you remember what colour the cars were?
R.L.: Oh, black.