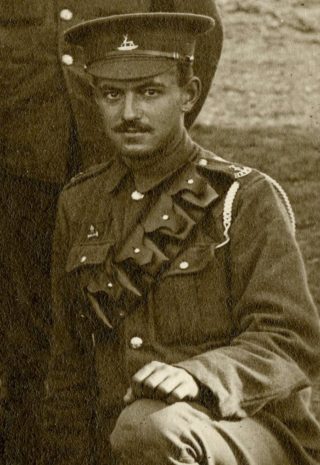 Horace William Carder was born on the 2nd January 1895 at Weston Colville, Cambridgeshire.

Little is known about what Horace did for the next three years except that he worked as a general packer for J. Rotherham & Co. Ltd. in Shoreditch, London. Then he applied to join the Hertford County Constabulary.

He gave his age on age on joining as 19 7/12 years and his date and place of birth as the 2nd January 1895 at Weston Colville. His height was 5 feet 11 inches, his chest 35 ½ to 37 inches, complexion dark, eyes brown and hair dark. He said he could both ride a pedal cycle and swim and his religion was Church of England.

He was medically examined on the 3rd July 1914 at Police Headquarters at Hatfield by the Police Surgeon who declared: I hereby certify that I have examined the above candidate as to his health and bodily strength and consider him fit for the Constabulary of this County. Signed L. Drage Surgeon.

Horace was Appointed as Police Constable 19 on the 22nd July 1914 and started his Probationary Training at Police Headquarters at Hatfield earning £1/4/6 per week.

Horace was Attested before R.B. Fellows J.P. and Theo Bassett J.P. at Hatfield on the 5th August 1914. On the 11th August he was taken onto the Roster and posted to E Division at Hitchin.

In November 1914 Horace passed his Ambulance certificate, an important qualification which entitled him to wear a badge on his lower left tunic sleeve to show he was trained in basic First Aid.

On the 13th December 1914 Horace was instructed that he was being transferred from E Division at Hitchin to D Division at Tring.

General Order 118 of the 21st July 1915 is a list of 96 officers which included the Chief Constable, 43 Constables who were Army reservists who were recalled and 50 Constables and 2 Sergeants who volunteered for military service. Horace is shown as PC 19 Carder H.W. D Division who enlisted in the Hertfordshire Yeomanry on the 10th June 1915.

Horace’s Army Service Record has not survived but from his Medal Roll Index Card and Medal Roll the following is known:

He joined the Hertfordshire Yeomanry as Private 2515 (later 105779 under re-organisation). The theatre of war he served in is not shown and as he did not receive the 1914-15 Star he must have stayed in the UK for some time.

Following the war Horace suffered bouts of Malaria during his Police Service so in all probability he saw service in the Middle East. In any case after serving with the Hertfordshire Yeomanry for three years and nine months he was discharged from the Army on the 26th March 1919. He was awarded the British War and Victory medals.

Like every other soldier when he was demobilised Horace was granted 28 days leave. He would have used this time to arrange his re-joining of the Police. Part of this process would involve him being medically examined by the Force Surgeon to ensure he was fit enough for Police duties. Horace was examined on the 19th March 1919.

The Electoral Rolls of 1918 and 1919 list Horace and his brother Reginald as living at Church Terrace, Cheveley, Cambridgeshire. Whilst Horace may have been living there after he was demobilised it’s more likely to be an administrative error regarding his brother, as Reginald had been killed in action in June 1918, albeit his body was never identified.

General Order 74 of the 21st March 1919 announced the re-appointments to the Force of five Police Soldiers who had been released from H.M. Army. Horace was shown as PC 19 Carder H.W. posted to D Division at Boxmoor from the 27th March 1919 at £2/7/0 per week. Each officer had to be formally re-attested. The Superintendents concerned had to report when this had been done showing the date and place of attestation and before whom taken. Horace was re-Attested the same day.

His period of Army Service from the 10th May 1915 to the 26th March 1919 was deemed to count as Police Service for pension purposes Vide Standing Joint Committee Resolution dated the 9th October 1914. 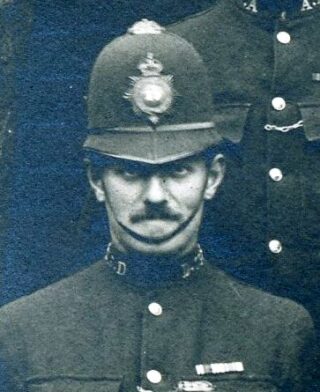 Horace married, Amy Emily Young, on the 18th September 1919 at the Parish Church, Boxmoor, Hemel Hempstead. Horace was shown as a Police Constable of 3, Manor Avenue, Apsley End. They had three children:
1. Reginald William born in 1923 at St. Albans.
2. Robert James born in 1927 at Berkhamsted.
3. Betty Amy born in 1933 at Bishops Stortford.

The Electoral Roll of 1921 lists Horace and Amy Carder as living at 185, London Road, Hemel Hempstead.

General Order 184 of the 9th November 1921 instructed Horace that from the 18th November 1921 he was being transferred from D Division at Boxmoor to E Division at Aston, to occupy a new house. The Electoral Rolls of 1922 and 1923 list Horace and Amy Carder as living at Aston.

Promotion To Sergeant And A Transfer.

General Order 61 of the 30th March 1923 informed Horace that he was being promoted from that date to the rank of Acting Sergeant on £5/0/0 per week. Then General Order 63 of the 3rd April 1923 instructed him that from the 13th April 1923 he was being transferred from E Division at Aston to D Division at St. Albans to occupy the house being vacated by PC 279 Prior. The Electoral Rolls of 1923 to 1925 list Horace and Amy Carder as living at 46, Tess Road, St. Albans.

General Order 2 of the 9th January 1926 announced the results of the Examination for Promotion for Police Sergeant to Inspector that had been taken on the 14th November 1925. Horace was one of two successful candidates.

General Order 56 of the 19th April 1926 instructed Horace that from the 26th April 1926 he was being transferred from D Division at St. Albans to D Division at Tring, to occupy the quarters being vacated by ex-Police Sergeant Lee. The Electoral Rolls of 1926 to 1930 list Horace and Amy Carder as living at the Police Station, Western Road, Tring.

General Order 100 of the 28th July 1926 issued orders for the Tring Show:
Tring Agricultural Show will be held at Tring Park on Thursday 5th August 1926.
Movements Mounted Detachment: PC 315 Thurley C Division and PC 93 Potton C Division will ride hired horses. PC’s 315 Thurley and 93 Potton will proceed to Tring on the morning of the 5th August and report to Sergeant 19 Carder at Tring Police Station at 9 a.m. They will return to their Stations after the Show is over.

On the 31st July 1930 Horace was transferred from D Division at Tring to A Division at Sawbridgeworth.

Horace was commended by G. Glenn Esq. J.P. Chairman Bishops Stortford Petty Sessions on the 21st May 1931 for his actions in arresting four men on charges of larceny and possessing housebreaking implements by night. The men were found to be in possession of a motor car which was subsequently found to have been stolen by housebreaking at Wanstead. (Vide Force Order No. 100/1931).

Promotion To Inspector And A Final Transfer.

On the 16th July 1936 Horace was promoted to the rank of Acting Inspector and received a pay increase to £310 per annum. On the 21st July he was transferred from A Division at Sawbridgeworth to B Division at Hoddesdon.

On the 16th July 1937 Horace’s promotion to the substantive rank of Inspector was confirmed as he received an increase of pay to £330 per annum.

As an experienced Inspector he would undoubtedly have had to deputise for the Divisional Superintendent on occasions, but he was never formerly promoted to that rank. He often would also have had to present evidence at cases at Police Courts and Inquests.

In the 1939 Register Police Inspector Horace Carder and his family are recorded as living at 30, Lord Street, Hoddesdon.

Between the 13th April and the 4th May 1941 Horace was off work sick with Malaria Pyrexia showing that even after all that time he was still suffering from the effects of the First World War.

Horace retired on pension on medical grounds, having served 28 years, on the 31st July 1942. He received a pension of £250 per annum.