You are here: Home>Police History>Hertfordshire Police Officers Who Served In World War 2>Remembering officers who served in the Second World War

Remembering officers who served in the Second World War 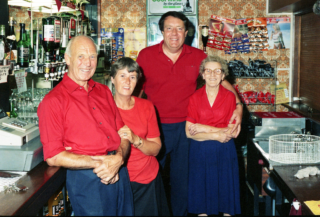 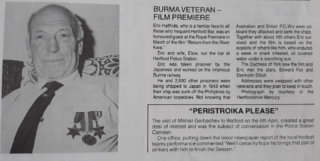 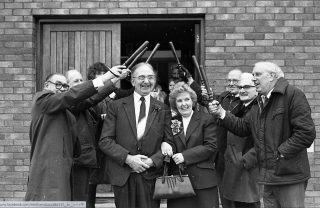 The  following conversation happened on Facebook about Hertfordshire officers who had served during the war. I have removed the surnames of contributors to protect their identity. I personally knew Eric and Elsie from my time living in the hostel at Hertford. They were lovely people and were good company for us single officers in the hostel.

Michael
The 75th commemorations of the end of WW II bring back some of my failing memories of the people I served with when I first joined in 1963. One memory was when I was attached to the TPG in the summer of 1966.
Fred Darts was the sergeant and ‘Bo Jangles’ was the inspector. From what I recall about Fred Darts, he was a first-rate skipper and from what I recall, he had done his bit for King and Country and from all accounts gave exemplary service, though I am not aware of the details. ‘Bo Jangles’ better known by his nickname to the extent I have now forgotten his real name had had to do his bit, and as I recall the Superintendent in charge of training had been a POW in a Jap POW camp. A PC 107 Johnnie Lee, an area car driver at Hemel had been a glider pilot, I believe in the ‘D’ day landings. And there were many more. These bods form part of our Force history and where possible, what we recall of their exploits should be remembered and documented as such. I doubt if many, if any are still alive now but I thought that perhaps if what snippets which can be recalled from other officers, we could build up a picture of the war achievements by the lads of our Force before it is too late and they are irretrievably lost. Just a thought.

Neil
I recall chatting to Dennis West at the 1993 Oxhey reunion – he served in the Far East in WW2.

Richard
Eric and his wife. Lovely couple who used to run the bar at Hertford nick. Sadly passed on some years ago. Eric served in Burma & I’m sure he worked on the bridge over the River Kwai.

Alan
Eric Halfhide as a young soldier just finished his 6 month training. First day of conflict without firing a shot got captured by the Japanese. Taken to the Kwai. Because of his young age fortunately for him he worked mostly in the kitchens. He survived the hellish conditions there and was being transported by POW ship when it was sunk by the Americans drowning 500. Around 900 survivors Eric amongst them were left floundering in shark infested waters. 1989 saw the film return to the bridge over the River Kwai. A preview of the film was shown at Hertford nick due to Eric.

Kay
such a lovely man.

Rod
I can honestly say that Eric and Elsie were two of the kindest, nicest and most genuine people it has been my pleasure to know. They always had a smile for us at the end of a shift and often during a shift during my time on CID (different world). I recall them looking after me after I badly sprained my ankle playing football for Hertford Police. I was sat at the bar with my leg on another stool whilst they administered ‘pain relief’ in copious quantities! For a man who had been through so much in his life, a more unassuming person than Eric I find it difficult to remember. RIP Eric and Elsie. I will never forget your kindness…

Wendy
I remember Eric at Hertford police station his name was Eric Halfhide and is featured in the book Return from the River Kwai. I accompanied Eric on some of his talks to various organisations. Charming man very brave soldier.

Alan
Wendy Yes you’re absolutely right no idea where I got Crabtree from???

Martin
I remember PS Fred Darts when I was a cadet at Ricky in 1971/2 took his number 92 as a PC in 1972 also knew Supt Cronin from being at HQ as cadet he could bollock you without raising his voice great people.

Michael
What happened to Fred in 1972 Martin, did he retire? As a group we all held him in high esteem and it was a great 3 months but unfortunately we did not keep in contact, being scattered around the county, though at the end, we all went down to London for a night out – that’s another story! And we attended a dinner, I believe at Hitchin in celebration with our wives and girlfriends etc. I think I have a photo of that somewhere, if I can find it.

Martin
Michael , yes he retired, being a cadet we didn’t get to know them old uns too much. Wasn’t allowed to sit with seniors.

Mike
Sergeant Ron Rowe served with the Chindits in Burma. Good training for his days at London Colney.

John
I remember Ron from my first posting to St. Albans in 1962. “You bring them in, son, and we’ll find something to fit.” And he did!

Neil
Jim, our boilerman/cleaner at Oxhey was on the arctic convoys in WW2.

Michael
Of course it was, thanks for reminding me in my dotage.

Michael
The idea appears to be gaining support. Do we have any volunteers to keep a watching brief on this and collate and perhaps research more deeply the stories and backgrounds we have heard in order to compile a more comprehensive history? I would volunteer but unfortunately I am getting past my ‘Best by’ date.

Michael
Thanks Ian, it appears to be an ideal vehicle for people to add their memories of our different characters before it is too late.

Aiden
Eric’s wife was my father in law’s conductress on the 331 during the war.

Richard
Must not forget Bertie Griggs who did over 30 trips as a RAF gunner during the war, what a character.

Michael
I never knew that but will agree that when they made him, they broke the mould, there was no other like him, excellent man.

Michael
Ah yes, Tony Storey, what a great character, every so often he would bang the drawers in the DS’s office and call everybody to ‘action stations’. Then at one CID Christmas do, he has us all up dancing the Hornpipe. Thanks Sandra, I had forgotten about that until you mentioned it – happy days.

Michael
Further, my step-father who lived at Grimsby and and a deep sea fisherman before the war, volunteered for the RNVR. He served variously in minesweepers and corvettes on the Russian Conveys. They were no picnics. Sadly they didn’t consider the granting of the Arctic Star until after he had died. It would have been nice for those gallant lads to have received whilst they were still living.

Peter
Harry Macfarlane a skipper at Hitchin in 60s and 70s later he passed away I helped sort out his papers turned out he was flying Bombers in the 2nd world war crashed in France and demolished a Farmhouse went back years later to apologise never talked about it. Real interest story.

John
George Hill, PC 178 and later a Sergeant at Hertford was a paratrooper who was captured at Arnhem.

Michael
I knew him when I was in ‘A’ division and after he retired he took up a job as senior traffic warden at Hertford but never knew of his war service.