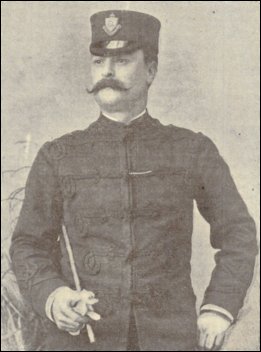 Constable Henry Mansfield Shore, is the fourth son of the late Joseph Shore, of Royston, Herts. He was born in 1856. His brother was in charge of the St Albans Division of the Hertfordshire Constabulary.

At the early age of 19 he joined the 106th Regiment. After serving a few years he retired from the Army, and in 1880 joined the Hertfordshire Constabulary as a Constable.

He served about four years, and during that time was several times complimented on his cases; once from the St Albans Bench by the Right Honourable Lord Grimston, for the apprehension of sharpers (Cheats, who live by their wits) on Harpenden race-course, and also from the Hertford Bench by the Honourable Baron Dimsdale, for the manner in which he had acted in arresting one of a gang of poachers from High Barnet. On this occasion he was assaulted with the butt end of a gun. Besides being rewarded for this, he was made first-class Constable. A third time he was publicly commended by the Chairman of the Middlesex Quarter Sessions, when he received a reward of £2 in connection with a horse stealing and attempted murder case.

The following is an extract from a letter written by the Director of the Criminal Investigation Department, Great Scotland Yard:- “To Colonel Daniell, Chief Constable, Sir,. . . Allow me, however, through you to thank the Officers, and more especially Constable Shore, to whose activity we owe the recovery of the stolen horses.”

In l885 he applied for Sergeant in the Borough of Dewsbury, and was selected out of 30 candidates.

The photograph was taken in 1894 when he was a Chief Inspector with the Dewsbury force.