Paul Watts with thanks to Kitty Moores 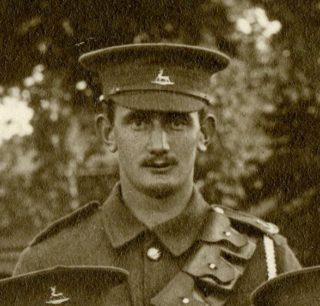 Frank Potton was born on the 16th March 1893 at Steeple Morden.

Little is known about Frank’s life over the next two years other than he worked as a farm labourer for A. Saunderson of The Mill, Steeple Morden. Then he applied to join the Hertford County Constabulary.

Frank’s Police Service Form 3 Record Sheet has survived and records the following: He said he was born on the 16th March 1893 at Steeple Morden, Cambridgeshire. His height was 5 feet 11 ½ inches, chest 36 ½ inches, complexion fresh, eyes hazel and hair dark brown. He said he could ride a pedal cycle but could not swim. He provided details of his next of kin as his mother, Julia Potton of The Green, Steeple Morden.

He was medically examined on the 11th July 1913 at Police Headquarters at Hatfield by the Police Surgeon who declared: I hereby certify that I have examined the above candidate as to his health and bodily strength and consider him fit for the Constabulary of this County. Signed Lovell Drage Surgeon. 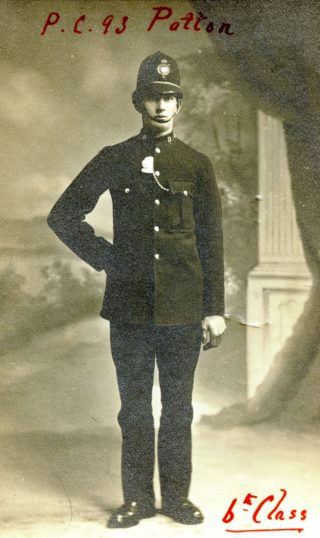 Frank was Appointed as Police Constable 93 on the 5th August 1913 and started his Probationary Training at Police Headquarters at Hatfield earning £1/4/6 per week.

In November 1913 Frank passed his Ambulance certificate, an important qualification which entitled him to wear a badge on his lower left tunic sleeve to show he was trained in basic First Aid.

He was Attested at Hatfield on the 1st December 1913. On the same day he was taken onto the Roster and posted to D Division at Hemel Hempstead.

On the 16th March 1914 having reached the age of 21 his period of Pensionable Service commenced.

Published on the 19th June 1915 in the Herts Advertiser under the headline Police Constables With The Colours:
Three Harpenden police officers, viz: Pc’s Neville J. Reid, Hermon Rowlingson and Frank Potton have joined the Hertfordshire Yeomanry. Another police officer from Harpenden who is with the colours is PC Wright, Grenadier Guards, who has been wounded. In addition, the following Hertfordshire constables who were formerly stationed at Harpenden are with the forces: PC Pond, R.G.A. joined from Royston, PC Ward, R.G.A. joined from Tring, PC Whippe, drill instructor at Bedford, joined from Hitchin district, PC Ernest F. Hawthorne, of Wheathampstead has also enlisted.

General Order 118 of 21st July 1915 is a list of 96 officers which included the Chief Constable, 43 Constables who were Army reservists who were recalled and 50 Constables and 2 Sergeants who volunteered for military service. Frank is shown as PC 93 Potton F. G Division who enlisted in the Hertfordshire Yeomanry on the 15th June 1915.

His Army Service Record has not survived but his Medal Roll Index Card and Medal Roll reveal that he joined the Hertfordshire Yeomanry as Private 2544 (later 105804 under re-organisation). There is no record in which theatre of war he served. He obviously remained at Home for some time as he was not awarded the 1914-1915 Star, but he was awarded the British War and Victory medals.

Like every other soldier Frank was granted 28 days leave on demobilisation. He would have used this time to arrange his re-joining of the Police. As part of that process he would have had to undergo a medical examination with the Force Surgeon at Police Headquarters at Hatfield. He was examined on the 12th February 1919. The end of his leave period would have coincided with the date of when he re-joined the Police.

General Order 39 of the 12th February 1919 announced the re-appointments to the Force of eight Police Soldiers who had been released from H.M. Army. Frank was shown as PC 93 Potton F. posted to G Division at Harpenden from the 27th February 1919 at £2/8/0 per week. Each officer had to be formally re-attested. The Superintendents concerned had to report when this had been done showing the date and place of attestation and before whom taken.

His period of Army Service from the 15th June 1915 to the 26th February 1919 was deemed to count as Police Service for pension purposes Vide Standing Joint Committee Resolution 35 dated the 9th October 1914.

Frank married Ellen Jane Rogers on the 23rd April 1919 at Hemel Hempstead. They had two children
1. Kathleen Gladys born in 1920 at Hertford.
2. Reginald Frank born in 1921 at Hertford.

The Electoral Roll of 1919 list Frank and Ellen Potton as living at Luton Road, Harpenden.

Another Transfer But Where?

General Order 156 of 14th November 1922 gave Orders for Mounted Officers to perform duty at various locations in relation to the Declaration of the Poll in the Parliamentary Elections of 1922. Frank was to be on duty at St. Albans.

The Mounted Establishment Is Formed.

On The Move Again.

General Order 123 of the 9th August 1924 instructed Frank that he would be transferred from the 18th August 1924 from B Division at Hertford to C Division at Mill End, to occupy the house vacated by ex-Constable 202 Day. The Electoral Rolls of 1925 to 1930 list Frank and Ellen Potton as living at 129, Uxbridge Road, Rickmansworth.

General Order 169 of 26th October 1924 gave Orders for Mounted Officers to perform duty at various locations in relation to the Declaration of the Poll in the Parliamentary Elections of 1924. Frank was to be on duty at Hemel Hempstead.

General Order 93 of 21st June 1925 with many other Officers Samuel was ordered to perform Mounted duties at the opening of Watford Peace Memorial Hospital by H.R.H Princess Mary Viscountess Lascelles.
“This ceremony will take place at 3 p.m. on Wednesday 24th June 1926 and will be preceded by the Presentation of an Address of Welcome by the Mayor and Corporation of the Borough of Watford at the Market Place at 2.45 p.m.
Command: The detachment of the Hertford County Constabulary on duty will be under the command of: Superintendent E. Maskell.
Movements Mounted: Constables 212 Lambert and 339 Oliver will ride Headquarters Horses and will report at King Street Police Station at 12 noon. Police Sergeant 35 Reid and Constables 93 Potton and 315 Thurley will ride horses to be hired by Superintendent A Division. The hired horses will be taken over by the Police Sergeant and Constables at Stanstead Abbotts at 2 p.m. on Tuesday 23rd instant and will be stabled at Watford on that night. The horses will be returned to Stanstead Abbotts immediately after the Ceremony on the 24th instant.
Escort: The Mounted Detachment under the command of Police Sergeant 35 Reid will meet the motor car conveying Her Royal Highness at Bushey Arches and escort the car during the period it is in Watford until it passes Bushey Arches on the return journey”.

General Order 46 of 29th March 1926 instructed Frank to be one of four Mounted Officers to be on duty for the Puckeridge Hunt Races being held near Cole Green Farm Brent Pelham on Wednesday 7th April 1926.

General Order 51 of 7th April 1924 instructed Frank to be one of four Mounted Officers to be on duty for The Hertfordshire Hunt Point to Point Steeplechases to be held at Annables Farm near Redbourn on Saturday 10th April 1926.

General Order 62 of the 4th May 1926 concerned the Emergency Regulations of 1926 and instructions for 50 Hertfordshire Police Officers, made up of three Inspectors, seven Sergeants and 40 Constables, to be on standby should the Secretary of State call upon the County Force to draft men elsewhere at short notice. These included officers from A,B,C, D and E Divisions. Orders for equipment and clothing would be issued if and when necessary, but the men were advised that they would require some sort of haversack. Frank was one of the Constables named in the list although there is no record of him ever being called upon.

General Order 100 of the 28th July 1926 issued orders for the Tring Show:
Tring Agricultural Show will be held at Tring Park on Thursday 5th August 1926.
Movements Mounted Detachment: PC 315 Thurley C Division and PC 93 Potton C Division will ride hired horses. PC’s 315 Thurley and 93 Potton will proceed to Tring on the morning of the 5th August and report to Sergeant 19 Carder at Tring Police Station at 9 a.m. They will return to their Stations after the Show is over.

In the 1939 Register Frank and Ellen are recorded as living at 92, Ebury Road, Rickmansworth. He is shown as a Park Keeper for Rickmansworth Urban District Council and a Dresser for A.R.P. (a neighbour works in the A.R.P. Stores so he may have been involved in issuing uniform).