In the early days of the M1 Motorway, Hertfordshire Constabulary patrolled our section with white Ford Zephyr Mark 2 Farnham Estate Cars. The first two, bought late in 1959, were distinctly registered 2000 AR and 2001 AR. These were replaced a couple of years later with two more, 3111 RO and 6400 RO.

In the snowy winter of 1962/63, 3111 RO, call sign VH35, was written off whilst stationary after it was hit in the rear by a lorry. The crew of PC’s Ken Surridge and Frank Fuller escaped injury. 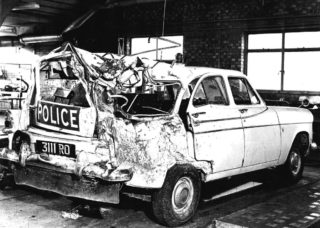 The car was disposed of for salvage and nobody thought any more about it until many years later, PC Roy Ward saw an advertisement in a magazine indicating that the car was still around.

There followed a series of attempts by different people to try and fully restore the car but for a number of reasons, including the lack of time, storage and funds, it did not quite get there. Finally, however, the car was passed into the hands of the Ford Heritage Centre at Dagenham, who have professionally continued the restoration. It was displayed at the Force’s 175th Anniversary in 2016. I was invited to see the car at Gaydon Motor Museum in 2017, still with its original call sign VH35 painted on the inside of the glove box. 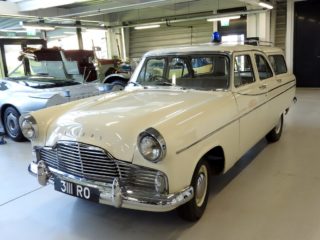 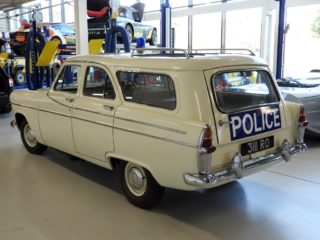 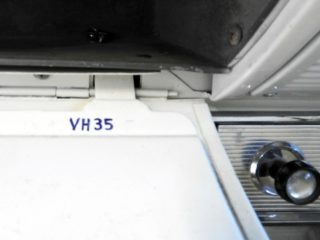 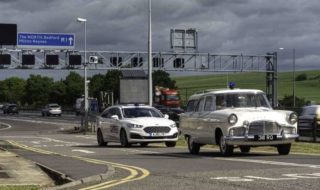 Earlier, in November 2014, I was approached by a magazine that was running an article on this car to see if I knew anything of the incident. I had known Frank Fuller since the 1960’s and contacted him to see if he was able (and willing) to talk to me about the crash. Despite being in his 90’s – although he has since died – his memory and account were very clear. He told me this story.

The officers were sent to a report of an accident on the M1 northbound near Junction 8. There was snow on the ground and the hard shoulder was barely visible. The police car was travelling south at the time and stopped on the southbound hard shoulder opposite the scene. The officers walked across both carriageways (!) to the accident scene and found only one car involved and no injury caused. Ken Surridge stayed with the damaged car to await recovery and Frank walked back across the M1 to call for a breakdown truck and write up the accident report in the warmth of the car. He was sitting in the front passenger seat and happened to glance up at the observer’s mirror when he saw a car approaching from the rear, followed by a J. LYONS articulated lorry. Only the nearside lane was usable because of the snow. Frank saw the car slow down, possibly because the driver had seen the police car, and the following lorry driver braked hard but was unable to stop and crashed into the back of the police car. Frank had seen what was happening and threw himself across the front bench seat before the impact. Thankfully he was not injured but as the earlier photo shows, the car was a write off.

A recovery truck from Stathams at Redbourn arrived to remove the patrol car and Frank went to speak to its driver, a chap known as Wimpey, at the same time as a Sergeant and Superintendent arrived.

The Superintendent asked who was in the car. He was told that it was Frank.
“Where is he and how is he?”
“He’s fine sir – he’s just down the road, talking to Wimpey.”
“Is he smoking his pipe, because if he is, he is OK?”
Frank was smoking his pipe!