Paul Watts with thanks to Alex Castle

Lionel Herbert John Slipper, who was known as Bert, was born on the 25th December 1890 at Fulham and was baptised on the 22nd February 1891 at St. Paul’s Hammersmith.

His mother Emily died on the 4th February 1929 at Halstead. His father James married Rebecca Meekings in 1931 at Kensington.

In the 1911 census the family were shown as living at Foreman’s Cottage, Walmer Road, Avondale Park, Kensington. James was now shown as a District Foreman, but Lionel had left home and was a boarder with the Stevenson family at 2, Bardwell Road, St. Albans and shown as being a Police Constable.

Lionel’s Police Service Record has not survived but from the 1911 census, which was taken on the 2nd April, it is obvious that he had joined before then. However, we know, from other sources, that his pensionable service did not begin until the 24th December 1911 when he reached the age of 21. He was Appointed as Police Constable 9 in the St. Albans City Police.

The Herts Advertiser, published on the 18th December 1915, carried an article stating that of the 35 strong St. Albans City Police Force twelve had enlisted for military service with another 16 married men enlisting as Section B Reservists.

Lionel’s Army Service Record has also not survived but from his Medal Roll Index Card and Medal Rolls it is clear that Lionel was one of those who volunteered.

The medal records show that Lionel H. Slipper enlisted as Private 3037 in the 54th Division, Army Service Corps but transferred as Private 302544 to the 1/7th Essex Regiment. On the 7th August 1915 he landed with them in the Theatre of War 2B Gallipoli (Dardanelles).

From his obituary, (see below), Lionel also served in Palestine and Egypt.

He later again transferred as Private P/5593 to the Military Foot Police. He was awarded the 1915 Star, the British War and Victory medals.

It is unknown exactly when Lionel left the Army but from his obituary, he received a Commission in the Essex Regiment in 1918.

Lionel married Helena Emily Elizabeth Summers on the 22nd February 1919 at St John’s Notting Hill. His occupation was recorded as Cadet and he gave his father’s address. There is no record of them having children.

Published on the 8th August 1919 in the Supplement to The London Gazette was an announcement:
Regular Forces, Infantry Service Battalions. The undermentioned Cadets to be temporary 2nd Lieutenants under the provisions of the Royal Warrant, dated 30th December 1918, promulgated in Army Order 42 of 1919. Listed for the Essex Regiment was Lionel Herbert Slipper from the 21st March 1919.

There are also no records which show when Lionel re-joined the St. Albans City Police but, again from his obituary, we learn it was during 1919. Certainly, the Electoral Rolls of 1919 and 1922 list Lionel Herbert and Helena Slipper as living at 70, Fishpool Street, St. Albans.

Published on the 11th August 1922 in The London Gazette Regular was an announcement:
Army Reserve of Officers, Essex Regiment. 2nd Lieutenant Lionel Herbert Slipper, late Service Battalions to be 2nd Lieutenant from the 3rd February 1922.

The Electoral Rolls of 1922 to 1930 record Lionel Herbert and Helena Slipper as living at 4, Paxton Road St. Albans.

In the 1926 Photograph Lionel is shown as a Sergeant and wearing his medals.

When the St. Albans City Police amalgamated with The Hertfordshire Constabulary in 1947 the responsibility of administering pensions also passed to the County Force. Consequently, we know that Lionel retired on the 24th December 1936 on pension as an Inspector having completed 25 years pensionable service. 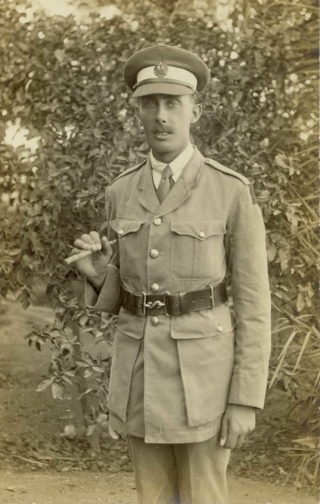 The Army List of 1939 show Lionel was still a 2nd Lieutenant in The Essex Regiment.

In 1941 Army List 2nd Lieutenant of the Pioneer Corps was made a temporary Captain. He continued to appear in the lists for 1942 and 1943.

Mr Lionel Herbert Slipper, who was a police inspector in St. Alban’s before he retired to Reydon, was buried at Reydon Parish Church. He died at the age of 84 years. Mr. Slipper, who lived at 10 Lowestoft Road, retired to the area after serving more than 25 years in the St. Alban’s City Police Force. He joined the police force in 1911 but enlisted in the Army four years later and served in Gallipoli, Palestine and Egypt before being granted a commission in the Essex Regiment in 1918. He returned to the police force in 1919, was promoted to sergeant in 1921 and became inspector in 1934. During that time, he received 2 commendations, one in 1927 and the other in 1931. Both were for the part he played in arresting suspects.