Men of the Hertfordshire Constabulary go to war 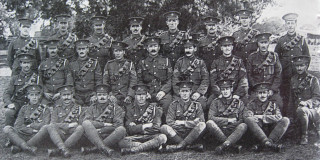 Between 1914 and 1918, 85 regular police officers left the force to fight in the First World War. Nine were killed. Many more were injured, including Charles Frank Randall (later to become the Deputy Chief Constable), who lost an arm. Even the Chief Constable, Alfred Letchworth Law was recalled to the army in 1915, where he was promoted to Lieutenant-Colonel. Back in Hertfordshire, the shortfall in manpower was compensated for through the recruitment of some 3,000 Special Constables. The shortage of men also prompted calls for women to be recruited into the police. (pictured: some of the eighty-five police officers from Hertfordshire Constabulary who volunteered for military service during World War One)