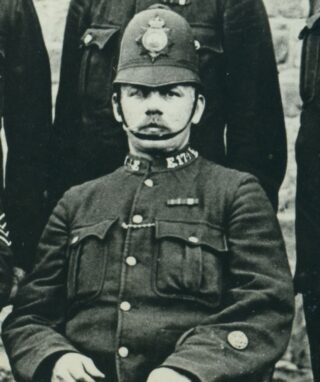 Lewis Saunders was born on the 28th August 1875 at Ivinghoe, Aston, Buckinghamshire.

His father, Alfred Saunders an agricultural labourer and a carman, married his mother, Mary Ann Capell, on the 1st February 1874 at Ivinghoe. They had six children:

During the 1881 census the family were living in a cottage in Swan Street, Ivinghoe. By the time of the 1891 census they had moved and were  living at 39, Highfield Road, Berkhamsted. Lewis was employed as a chemical labourer. The 1901 census records them living at the same address, but Lewis had left home and joined the Army.

Lewis enlisted on the 15th December 1897 at Great Berkhamsted as Private 1273 in the Coldstream Guards signing up for three years in the Colours and nine in the Reserves.

The following was recorded: He said he was born in Ivinghoe Aston, Bucks., his age was 22 years 4 months and his trade was a labourer. He said he was not an apprentice, was not married and had never been sentenced to imprisonment. He said he had served in the 2nd Battalion, Bedfordshire Militia Regiment.

His description on enlistment was recorded as: Apparent age: 22 years 4 months. Height: 5 feet 9 8/10 inches. Weight: 158 lbs. Chest: 36 inches to 38 ½ inches. Complexion: Fresh. Eyes: Blue. Hair: Brown. Marks: Tattooed several crosses on both forearms. Scar back and left side of head. He said his religion was Church of England and gave his next of kin as his parents, younger brothers Thomas and Andrew, and sisters Amy and Matilda all of 39, Highfield Road, Berkhamsted. Later the particulars of his marriage were also recorded.

On the 17th December 1897 he was medically examined at Bedford and passed fit and four days later joined the Regiment in London. On the 1st June 1898 he signed the following: I hereby elect to come under the Rules regarding Messing Allowance contained in the Royal Warrant dated 31st March 1898. Signed L. Saunders 1st Battalion, Grenadier Guards.

On the 3rd August 1898 he was appointed as an unpaid Lance Corporal. Two days later he extended his Service to 7 years with the colours under Army Order of 1898 and thereby become liable to serve the extra year if abroad. Authority dated Horse guards. He received a gratuity of £2 on extension of Services under Army Order 1 of 1898.

On the 30th November 1898 he was  awarded a 3rd Class Certificate of Education. On the 10th March 1899 he was posted to Gibraltar and three days later became a paid Lance Corporal.

On the 4th September 1903 he was awarded his 2nd Class Certificate of Education. On the 2nd December 1903 he was appointed Lance Sergeant. On the 28th March 1904 he passed a Class of Instruction for the rank of Sergeant. On the 1st April 1904 he elected to draw his service pay under the Conditions of the Royal Warrant contained in Army Order 66 of 1902 and was granted service pay class 1. On the 15th December 1904 he was transferred to Army Reserve Section B on expiration of his Army Service.

Lewis married Florence Rose Jacobs on the 6th May 1905 at St. Marys Church, Reading. They had four children:

On the 24th September 1909 he re-engaged for Section D Army Reserve for 4 years from the 15th December 1909. On the 14th December 1913 he was discharged as a Lance Sergeant on the Termination of Engagement of his Section D.

On leaving the Army in December 1904 Lewis appears to have immediately applied to join the Hertford County Constabulary. As part of that process he had a Medical examination by the Force Surgeon at Police Headquarters at Hatfield on the 11th January 1905. He would also have had an interview and would have been told to wait for a date of appointment.

His Hertford County Constabulary Form 3 Police Service Record has survived and the following was recorded: He said he was born on the 28th August 1875 at Ivinghoe. His height was 5 feet 10 inches, chest 40 inches, complexion fresh, eyes brown and hair dark brown. He said he could both ride a pedal cycle and swim. He gave his next of kin as his wife Florence Rose Saunders.

He was posted to F Division at Hertford and started his Probationer training under a senior experienced Constable and supervised by his Superintendent earning £1/3/11 per week. He was Attested on the 28th February 1905 at Hertford and he was appointed as Constable 174 on the 1st May 1905.

Some Minor Blemishes And A Transfer.

General Order 1 of the 2nd January 1907 announced that Lewis had been reported for misconduct and he was being transferred, at his own expense, from F Division at Hertford to E Division at Kings Walden. The details of the misconduct have not survived but he moved on the 8th January 1907.

His Service Record also shows that he was cautioned in August 1907, again for misconduct, in relation to the Tring incident the details of which have also not survived.

Despite these minor instances of misconduct they did not prevent Lewis being awarded a pay increase as General Order 22 of the 20th August 1907 shows that from the 1st August 1907 his pay was increased from £1/5/8 to £1/6/10 per week.

General Order 11 of the 2nd April 1909 announced that as Lewis had made a report without due enquiry, he was fined one day’s pay of three shillings and ten pence.

General Order 16 of the 1st July 1911 instructed that a detachment of the Hertford County Constabulary would proceed to Cardiff on Wednesday 5th July 1911 for duty. It included one Inspector four Sergeants and 25 Constables one of whom was Lewis. They were given the following orders:

The Deputy Chief Constable will superintend the departure from Paddington Station. The detachment will parade in Paddington Station at 11 a.m. on 5th July. The train will leave at 11.30 a.m. arriving at Cardiff at 2.22 p.m. Every man will take a change of clothing, second suit of uniform, great coat, helmet, cape, leggings, night belt and lamp, truncheon & warrant card, whistle and chain and handcuffs. PC Reynolds will act as Clerk to the Detachment. The men detailed for duty have been carefully selected and any neglect of duty or misconduct tending to bring the Hertfordshire Constabulary into disrepute on the part of any Officer or Constable of the detachment while on duty in another County will meet with the severest notice of the Constable. Special arrangements will be made for the payment of fares to and from Cardiff. Inspector Sullivan will be given a special advance from which he is authorised to pay back officers a sum not exceeding 5/- per week and this advance will also be available for any necessary expenditure of an extraordinary nature. Receipts to be submitted to the office. The wives of officers proceeding with the Detachment will be paid £1 per week from the officers pay during their absence. Food and lodgings will be provided. 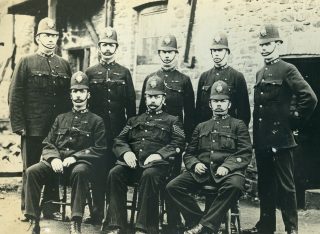 The 1912 and 1913 Electoral Rolls list Lewis Saunders as living at Kings Walden.

Lewis’ Police Service Record shows that on the 22nd May 1913 he was transferred from E Division at Kings Walden to E Division at Hitchin.

Lewis was severely reprimanded on the 25th May 1913 for missing a Conference Point and making an entry in his report book that was incorrect.

The 1914 to 1920 Electoral Rolls record that Lewis and Florence Saunders were living at 24, Highbury Road, Hitchin.

There is no trace of an Army record for Lewis for the period of the war, but from his Police Service Record it shows that he was loaned to the Army as a Drill Instructor at Bedford from the 10th September 1914.

Lewis was not the only Hertfordshire Constable loaned to the Army as a Drill Instructor at Bedford as the Police Service Record of PC 232 John Major shows he was there from the 9th September 1914 and a local newspaper reported that PC 173 William James Whippe was also there. The fact that they were “on loan” tends to suggest they were still receiving Police pay.

However, Lewis was not retained as a Drill Instructor as General Order 47 of the 26th March 1915 shows: Police Constable 174 E, Lewis Saunders, attached to the Army as a Drill Instructor, with the temporary rank of Sergeant, having been reported for: “Opening an official despatch without authority, at Bedford, on 15th March 1915,” is: Severely reprimanded. PC Saunders will revert to Police duty at Hitchin, reporting to the Superintendent of the E or Hitchin Division, at Hitchin, at 2.30 p.m. on 27th March 1915.

Lewis did not give up on re-joining the Army as his Police Service Record also shows that he enlisted on the 10th December 1915, probably at Hitchin. He was then transferred to Section B Army Reserve and returned to his Police duties. This was part of what was known as the Derby Scheme. Thousands of men around the country including dozens of Hertfordshire Police Officers enlisted under the scheme. The Hertfordshire Officers mainly enlisted between the 9th and the 11th December 1915. Every Section B Reservist was issued with an individually numbered Khaki Armlet with a red Crown displayed on it which was to be worn on the upper left arm to demonstrate they were a Reservist and were waiting to be mobilised. There is no record of him being mobilised.

Another Transfer But Not Immediately!

However, his Police Service Record shows that on the 27th February 1920 he was transferred from E Division at Hitchin to A Division at Little Hadham and the 1920 to 1926 Electoral Rolls list Lewis and Florence Saunders as living at the Police Cottage, Little Hadham.

General Order 102 of the 8th August 1922 announced that on the 5th August the Chief Constable had reprimanded Lewis after he was found, by Superintendent J.H. Prior, at 12.50 a.m. on the night of 29/30th July 1922, lying by the roadside at Little Hadham Hall, during his 12 midnight Conference Point.

Lewis’ Police Service Record shows that on the 10th November 1924 he was cautioned by the Chief Constable for without good and sufficient cause entering Licensed Premises to wit, The Fox PH at Little Hadham, on a date between 25th and 31st October 1924 and consuming intoxicating liquor thereon contrary to Standing Order No. 6 of the Force. There is no mention that Lewis had been on duty at the time as had been so his punishment would likely have been far more severe.

Selection of men:  Preference will be given to volunteers and to men who have actually served with the late Constable Saunders. Rendezvous: Little Hadham Police Cottage 1.45 p.m. Facilities for attendance of any member of the Force who wishes to attend voluntarily are to be afforded as far as possible.

Published on the 13th February 1926 in the Hertfordshire Mercury under the headline Little Hadham Funeral of PC Saunders: The funeral took place at the Church, on January 30th. The church was crowded. Superintendent Wright, of Bishop’s Stortford, made the police arrangements for the funeral. Following the mourning coaches were 21 Constables of the Bishop’s Stortford or ‘A’ Division, Superintendent Wright, Inspector Herbert (Ware), and Sergeant Downing (Much Hadham) were the police officers in charge. When the cortege reached the church, the police lined either side of the road and formed a guard of honour for the procession to pass through into the church. Six Constables, PC Gillett, PC Barker, PC D. H. Gillett. PC Hill, PC Spencer and PC Skeggs acted as bearers. The Rev. C. Dale-Williams, the Rector, officiated. Among those present were some members of the local branch of the British Legion, as well as members of the Police Force; Mr W. Hastings representing the Much Hadham Men’s Institute, of which the deceased was a member. Among the tributes of affection were wreaths from the ‘A’ or Bishop’s Stortford Division, from his old comrades, from the Hadham branch of the British Legion, and from Much Hadham Men’s Institute. It was a very impressive funeral, and on all sides the greatest respect to the memory of the deceased, who had so worthily served his country and county both as a soldier and a very efficient member of the Herts County Constabulary.