Maintaining Sufficient Constables When Their Desire Was To Enlist

General Order 39 published on 12th March 1915 announced that on the 9th June 1913 the Secretary of State had authorised the Hertford County Constabulary to augment its establishment in order to take account of the Police Weekly Rest Day Act 1910 being implemented (prior to this Police worked 7 days a week) and to provide a First Police Reserve. The agreed authorised establishment had been set at 1 Chief Constable, 9 Superintendents, 9 Inspectors, 40 Sergeants and 291 Constables.

Recruitment and training had been stepped up in anticipation of the need for extra Police Officers, but records do not show to what level the strength of the establishment had actually reached by 1914.

With the outbreak of the war on 4th August 1914 all Army and Naval Reservists were recalled to the Colours, which resulted in an immediate loss of more than 40 men. This loss was rapidly followed by further men resigning their appointments in order to voluntarily enlist.

Despite This The Weekly Rest Day Was Implemented As Can Be Seen In The Following.

Rest Days
Order No. 150/1914 is hereby cancelled and the following substituted.
On or after 1st April 1915, all officers not being above the rank of Inspector will be granted one day’s rest in every seven, under the provisions of Order 97/1914.
In order to maintain the efficient working of the duties of the Force, Superintendents will avail themselves of the services of the Special Constabulary for regular Police duties.
Special Constables will work in pairs to replace one regular Constable, or in special cases, at the discretion of the Superintendent and on the recommendation of the Section Leader, alone, and in tours of duty not exceeding three hours as at present ordered, unless the men volunteer for longer hours in preference, but in no case is a tour of duty to exceed four hours at a stretch. 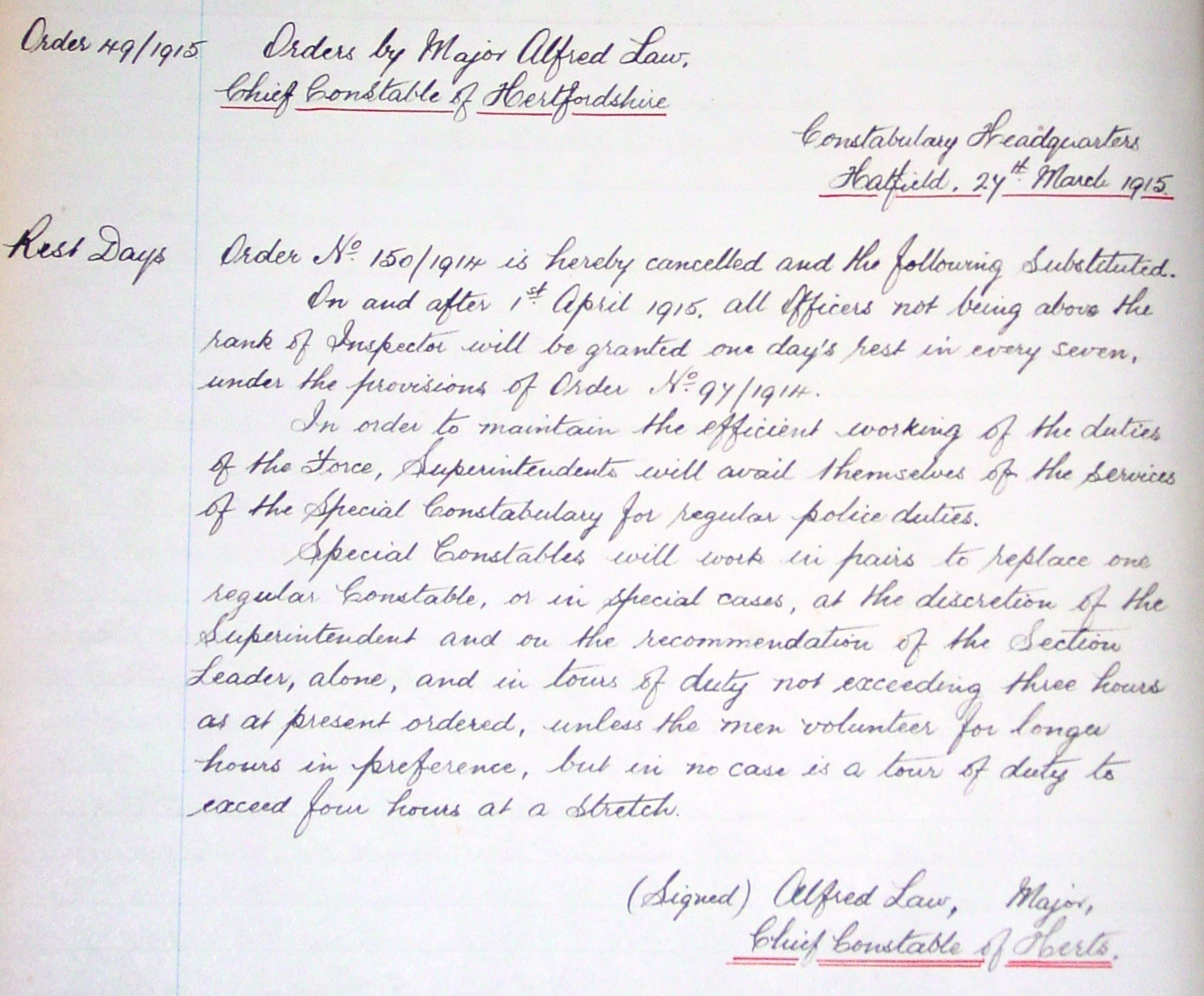 It Soon Became Very Clear Though That The Weekly Rest Day Could Not Be Sustained.

General Order 78 of 12th May 1915
Rest Days
Owing to the increasing number of vacancies in the Hertford County Constabulary, due to men volunteering for Military Service, and to the intimation received from the Home Office that candidates of military age should not be accepted during the period of the war, it has been necessary, in order to secure the efficient working of the Constabulary, to reduce the number of rest days granted to the members of the Force.
Order No. 49/1915 is hereby cancelled and the following substituted:-
On or after the 16th May 1915, all officers not being above the rank of Inspector, will be granted 1 days leave in every fourteen.
Rest days will be granted under the provisions of Order No. 97/1914, as amended by this Order.

It Was Not Only Rest Days That Had Been Affected But Annual Leave As Well.

General Order 64 of 16th April 1915
Annual Leave
Officers who were prevented from taking their annual leave in 1914, will be granted leave as under for 1915:-
Inspectors 22 days, Sergeant 16 days, Constables 12 days
Superintendents will submit lists of men who lost their annual leave in 1914 and will also rearrange and submit a fresh leave roster for 1915, as early as possible.

Hertfordshire Was Not Alone In Suffering These Problems.

Every Police Force in the country was in a similar position and the Government had introduced legislation in an attempt to control the situation.

The Police Constable (Naval and Military Service) Act 1914, the Police Reservists (Allowances) Act 1914 and the Police (Emergency Provisions) Act 1915 were designed to “encourage” Constables not to resign their Appointments to enlist unless the Standing Joint Committee and the Chief Constable had agreed beforehand that the Constabulary could afford to be without them. In part they managed this by agreeing that any time served in the military would count as time served towards qualifying for their Police Pension. As the pension was a major factor in attracting men to join the Police in the first place it can be seen that this was a major incentive.

Furthermore, Constables were paid more than an Army Private so dependants of Constables who enlisted in the military were paid a Separation Allowance which boosted their military pay to the same as that of a Constable. The following demonstrates this in action.

General Order 112 of 8th July 1915
Police Officers Serving in H.M. Forces Reference Order 118/1914
Superintendents of Divisions will notify this office, every fourth week, commencing 31st July 1915, the amount of Separation Allowance including the amount of compulsory deduction from pay, being paid to the wife or other dependent from Army funds, in order that the allowance paid from Police funds may be adjusted, if necessary, to meet the requirement of the Police Constables (Naval and Military Service) Acts. A form of certificate attached.

In addition, those individuals who had reached the required 25 years’ service and could retire were told that they could not do so for the period of the war, unless there was a medical reason why they should retire. Their pensions though were protected in that should they be unfortunate enough to be disciplined, during this period of additional service, for something which would normally involve the loss of pension rights, then they would not lose their pension. Furthermore they also received a deferred Bonus, at the rate of £25 per annum, payable when they did finally retire. Recently retired Constables were also encouraged to be re-appointed again for the period of the war.

The Standing Joint Committee agreed to accept the temporary reduction or loss completely of some postings, and this legislation went a long way to maintaining the strength of the Constabulary and also satisfying the desire of those who wanted to enlist.

The “Incentives” Seemed To Be Working.

General Order 118 of 21st July 1915 is a list of 96 officers, which included the Chief Constable, who joined the armed forces. It comprised of 43 Constables who were Army reservists who were recalled and 50 Constables and 2 Sergeants who volunteered. Research has since shown that this list was not complete and of course after it was published many more men enlisted but it does show that the force very quickly lost a third of its men.

Not Everyone Took Heed Of The “Incentives.”

The following General Order shows that despite the “incentives” not to resign their appointments some individuals still decided to do so.

Both PC Bennett and PC Hull enlisted and survived the war but whereas PC Hull re-joined the Constabulary after he was demobilised PC Bennett chose not to.

Good News For Some Of The Constables Who Chose To Enlist “Without Consent.”

The Standing Joint Committee subsequently agreed to approve the military service of some Constable to count towards their pensionable service.