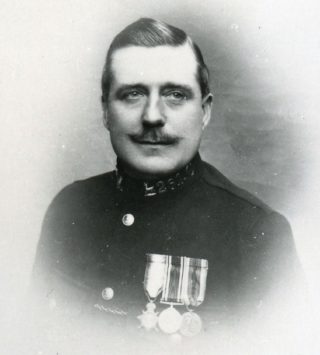 This is another story of two brothers who were both members of the Hertford County Constabulary as well as soldiers in the First World War.

Edwin Ward was born on the 24th July 1884 at High Wych and baptised there on the 7th September 1884. Edwin’s brother Herbert became Constable 267.

In the 1901 census the family are listed as living at Vicarage Lodge, High Wych and Arthur is shown as working as a Foreman of a Dredger. In the 1911 census they are living at the same address, but Arthur is now a Carpenters Labourer and both Edwin and Herbert had left home, joined then left the Army and were now both in the Police.

On leaving the Army he probably returned to live at home whilst he worked as a labourer for the Herts. and Essex Waterworks at Harlow, but it was not long before he joined the Police.

Edwin’s Form 3 Police Service Record has survived and shows the following:
He stated he was born on the 24th July 1884 at High Wych, he was 5 feet 11 ½ inches tall, his chest was 38 ½ inches, his complexion fresh, eyes blue and his hair brown. He said that he could not ride a bicycle or swim and that his next of kin was his father, Arthur Ward, of Vicarage Road.

Edwin had a medical examination with the Force Surgeon on the 22nd April 1907 to determine whether he was fit enough for Police duties. Clearly, he was as he started his Probationary Training at C Division Watford on the following 1st May. All training was undertaken on Divisions rather than at Headquarters at this time.

He was Attested on the 11th June at Watford and was Appointed Constable 261 two days later on the 13th June. He remained stationed at Watford. General Order 16 of the 2nd July 1907 reiterated his Appointment by announcing that PC Ward 261 C was placed on 23/11 per week from 13th June 1907.

Edwin married Esther Grave on the 16th May 1908 at Watford. There is no record of them having any children.

In December 1909 he passed his Ambulance certificate, an important qualification which entitled him to wear a badge on his lower left tunic sleeve to show he was trained in basic First Aid.

General Order 34 of the 14th September 1910 announced that PC Ward 261 C had been commended by the Chief Constable and the Chairman of the Watford Petty Sessions for detecting and arresting prisoner in case of attempted shopbreaking at Watford on 29th August 1910.

On the 26th October 1911 Edwin was transferred from C Division at Watford to G Division at Sandridge.

General Order 21 of the 29th March 1912 announced that the Chief Constable had fined Edwin 5/- for drinking on licensed premises when on duty on the 22nd March 1912. Then General Order 23 of the following day ordered Edwin to move from G Division at Sandridge back to C Division at Watford. The move took place on the 10th April 1912.

General Order 118 of 21st July 1915 is a list of 96 officers which included the Chief Constable, 43 Constables who were Army reservists who were recalled and 50 Constables and 2 Sergeants who volunteered for military service. Edwin is shown as PC 261 Ward E. C Division recalled to the Royal Garrison Artillery on the 4th August 1914.

Very little is known about his War service but from his Medal Roll Index Card and Medal Rolls we know the following:
Edwin landed in France on 16th February 1915 as Gunner 17214 with the 10th Siege Battery, Royal Garrison Artillery. He served 4 years 5 months and was discharged on the 29th January 1919.

He was transferred to Z Class Army Reserve on the 9th February 1919 and awarded the 1914-15 Star and the British War and Victory medals.

Back home the families had not been forgotten as can be seen by General Order 20 of 19th January 1919 entitled, “Allowances to wives of Police Soldiers”.
It announced that the Chief Constable had considered the position of each individual Police Soldier under the new scale of pay and found after taking into consideration the total income of the family from allowances, including the value of the soldier’s food and clothing, that in 16 cases the families were in a worse financial position then they would have been had the man remained in the force. These cases were put before the Standing Joint Committee and they authorised extra payments, with effect from 1st July 1918. PC 261 Ward C Division was awarded £0/4/5 extra per week with £6/5/7 to be paid retrospectively with the allowances for the week ending 22nd January 1919.

Like every other soldier Edwin was granted 28 days leave on his demobilisation. He would have used this time to arrange his re-joining of the Police and he would have had to have had a medical examination to determine whether he was still fit enough for Police duties. The end of his leave would have coincided with his date of re-joining.

General Order 23 of 25th January 1919 listed 25 Police Officers who having been released from H.M. Army had been re-appointed to the Force. Edwin was shown as:
PC 261 Ward E. C Division at Watford from 30th January 1919 on £2/11/0 per week.
Each officer had to be formerly re-attested. The Superintendents concerned had to report to Headquarters the date and place of Attestation and before whom taken. The Electoral Rolls of 1919 to 1923 list Edwin and Esther as living at 73, Estcourt Road, Watford.

Edwin was part of a detachment sent to Luton to help quell rioting between the 20th July and the 5th August 1919.

General Order 177 of the 9th August 1919 announced that the following extract from a letter received from the Head Constable of the Luton Borough Police under date 4th August 1919 was published for information.
“I desire to express to you my high appreciation of the members of your Force on detached duty here for the riot. They proved to be excellent fellows in every way, gave a splendid account of themselves when need arose and conducted themselves in a manner which was credit to any Police Force.”
The Chief Constable is very gratified to have such a good account of the services of the detachment and congratulates Inspector Wright and the Sergeants and Constables. An entry of service on Riot Duty will be made in each man’s record sheet. Edwin was of the officers detailed to attend. 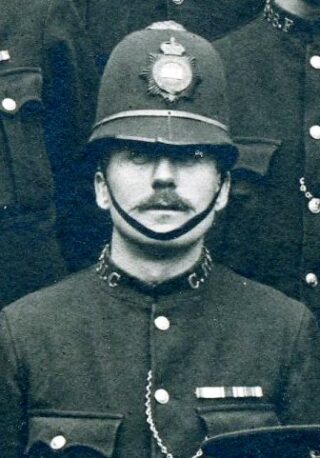 General Order 1 of the 2nd January 1924 ordered Edwin to transfer on the 14th January 1924 from C Division at Watford to A Division at Ware and to occupy the cottage being vacated by Constable 184 Edwards. Due to bad weather the move was postponed until the 11th February 1924. The Electoral Rolls of 1924 to 1930 list Edwin and Esther as living at 4, Park Road, Ware.

General Order 127 of the 12th August 1924 announced that at the Wisbech Petty Sessions on 5th August 1924, the Justices complimented Constable Edwin Ward 261 A Division on the intelligence he showed in the arrest, at midnight on the 28th July 1924, of Arthur William Smith for stealing a bicycle.

The reports in the case show that the Edwin was in Market Place, Ware and was keen and alert and acted with initiative. Edwin saw the cycle was a Raleigh but when he asked Smith what make it was, he was unable to tell the officer. Edwin then suspected that Smith had stolen the cycle and arrested him. The cycle was found to be stolen from Rings End, Isle of Ely. The Chief Constable also commended Edwin for his action and directed that the papers in the case should be placed with his records.

General Order 117 of 29th August 1926 concerned the Emergency Regulations 1926 and instructions for 50 Hertfordshire Police Officers to be on standby should the Secretary of State call upon the County Force to draft men elsewhere. The first 20 named would be required to proceed at 8 hours’ notice or less. These included officers from A,B,C and D Divisions and it would appear to qualify to be amongst the 20 you needed to have a motor bicycle available. Edwin was not one of the top 20 but his entry does show that he did not own or have access to a motorcycle.

General Order 140 of the 18th October 1926 declared that under the Emergency Regulations 1926 a detachment of the Hertford County Constabulary, consisting of an Inspector, three Sergeants and 36 Constables, was detailed for duty in the County of Derby as from 19th October 1926. Edwin was one of the Constables sent. Their orders were:
The detachment will proceed by nearest railway route to St Pancras, London Midland & Scottish Railway, reporting on the main departure platform at 2 p.m., when Inspector Digby will parade the party and call the roll. The detachment will proceed by the 2.25 p.m. train to Derby. On arrival at Derby, Inspector Digby will report to the representative of the Chief Constable of the Derby County Constabulary who will meet the train and provide omnibus transport to Ripley about 10 miles distant.
Dress: Greatcoats, cape, cloth jacket, 2nd cloth trousers, 1925 issue helmet, leggings, truncheons and handcuffs, woollen gloves, lamps, whistles and chains.
Divisional Superintendents will advance Railway fares if required and an account for same will be rendered to Headquarters Office for repayment. Inspector Digby will render a daily report direct to the Chief Constable’s Office each day, showing state of health of all members of the detachment and any matters of interest which may occur.

General Order 156 of 14th November 1926 announced orders for an Inspector, two Sergeants and 18 Constables with regard to the visit of HRH The Prince of Wales to Luton on the 17th November 1926. Edwin was listed as one of those detailed to attend. In command of the Hertfordshire contingent was Inspector G.T. Sharp of R Division who would act under orders as laid down by the Chief Constable of the Borough of Luton. The detachment was instructed to report at the Borough Police Station Luton at 9 a.m. The men were ordered to take the following dress and equipment: Great Coats 1925 issue, Cloth jackets 1926 issue, Dress trousers 1926 issue, Cloth helmets 1926 issue, Whistle and chain, Handcuffs, Pocket Book, Truncheon, Black woollen gloves and Capes.

General Order 157 of the 14th November 1926 reported:
COAL STRIKE
The Chief Constable is gratified to learn that the services of the detachment of the Hertford County Constabulary added temporarily to the Derby County Constabulary, were satisfactory, and he has much pleasure in publishing the following extract from a letter received from the Chief Constable of Derbyshire, under date 11th November 1926:
Begins: “The detachment has done very good work and I will be grateful if you will be kind enough to convey to them my warm thanks for their services. I may say that Inspector Digby did very good work indeed and was of great assistance to my Ilkeston Superintendent. Will you also give him my personal thanks”. Ends.

If this letter from the Derbyshire Chief Constable seems a bit luke warm it transpires 10 of the Hertfordshire Constables suffered food poisoning after eating food which was supplied to them on behalf of the Derbyshire Police Authority. The Hertfordshire Force Surgeon said that their illness should be classed as an injury on duty and the Chief Constable agreed and said no one should suffer any stoppages from their pay.

On the 3rd March 1930 Edwin was cautioned by Superintendent Wright for parading 28 minutes late for duty on the 26th February 1930.

In the 1939 Register Edwin, a Police pensioner retired, and Esther are listed as living at The Dell, Wrenbrook Road, Bishop’s Stortford.