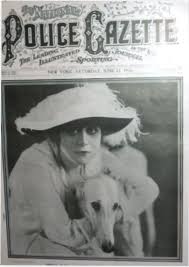 Extract From Police Review and Parade Gossip, May 24, 1895

‘Presentation to the new Deputy Chief Constable of Hertfordshire

Captain Wymer, the recently appointed Deputy Chief Constable of Hertfordshire, was the recipient recently of a testimonial from the Officers and men of the ‘A’ or Ware Division of the Herts Constabulary. The members of the Division, assembled in the Court Room at Ware Police Station, under Supt Wood, who succeeds Captain Wymer as Superintendent at Ware, to witness the presentation.

Supt Wood, who made the presentation, said that at the request of the Officers and men of the Division, he had very great pleasure in asking both Captain and Mrs Wymer to accept the present on the occasion of the promotion of Captain Wymer to be Deputy Chief Constable and his transfer to Watford. He need hardly say that general regret was felt at their departure, for both had always been extremely kind, and Captain Wymer had done his utmost to get as many promotions for his Division as possible, which was a great incentive to all the men. Mrs Wymer was also greatly esteemed throughout the Division. They wished both of them prosperity, health, and long life in their future career. Supt Wood then made the formal presentation of a handsome, elegantly shaped tea urn, which bore the inscription :


“Presented to Captain and Mrs Wymer by A Division Herts Constabulary, on his promotion as Deputy Chief Constable and transfer to Watford May 9th, 1895.”

Captain Wymer, who had not quite recovered from a severe attack of influenza, was not allowed to undertake the exertion of making a speech, and Inspr Turner read his reply, which was to the effect that Mrs Wymer and himself could not thank them sufficiently for the very handsome and useful gift that the officers and men of the Division had presented to them. It – and the handsome claret-jug which the ‘A’ Division had presented to them before – would in their daily use bring back the recollection of their time in the Division; but they did not require even such pleasant reminders, for during the six years he had been in charge of the Division, he had, as he thought they knew, felt the greatest interest in all concerning it, first the work in all its branches and the encouragement it gave to all towards promotion, and then any recreation and amusement that it lay in his power to bestow. That interest had been to him a source of the utmost pleasure, for whilst he felt that the work had been most satisfactory, he did not remember that he had had one word of fault to find with any member of the Division for some long time past. There was not one of whose character he had not a good and high opinion. In conclusion, he sincerely congratulated them on the promotion of Supt. Wood, who was such an excellent Officer, to take charge of them in his place. Mrs Wymer joined him in renewed thanks to them all’.