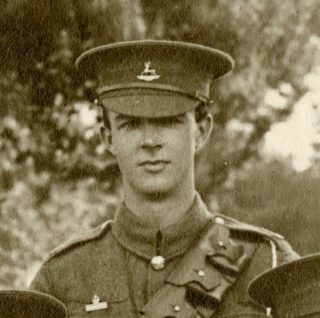 His father, William Hardie Quarrie who was born on the Isle of Man, married his mother, Mary Johnson who was born in Melbourne, Australia, on the 15th September 1886 at Stretford, Lancashire. They had four children one of whom died prior to the 1911 census:
1. Percival Hardie born in 1887 at Barton upon Irwell, Lancashire and died in 1889 at Stretford.
2. Florence Mary born in 1890 at Barton upon Irwell.
3. Harold Hardie.
4. Sidney William born in 1899 at Cambridge.

Curiously the 1891 census records Harold’s father at two different addresses. Firstly, he is shown as Police Sergeant William H. Quarrie lodging with the Anderson family at Stanley Street, Ormskirk, Lancashire and then living with his family at Freckleton Street, Kirkham, Fylde, Lancashire.

By the time of the 1901 census William Quarrie has transferred to the Cambridge Borough Police and been promoted to Inspector and the family were living at 5, Regent Terrace, Cambridge.

In 1905 Harold’s mother died and his father then married Elizabeth Camps on the 29th November 1906 in Islington. During the 1911 census his father and stepmother were living at Baldock Street, Royston and his father was now employed as a Manager of Licensed Properties to J. and J. E. Phillips Ltd. Brewers, Royston

Harold, during the 1911 census, was living and employed at Mess. J. Taylor, Court 58/60, Sidney Street, Cambridge as an outfitter’s assistant.

Little is known of Harold’s life over the next two years except that he was employed as a Clothiers Assistant for Messrs. W.H. Watts & Co. in Church Street, Liverpool. Then he applied to join the Hertford County Constabulary.

He gave his age on joining as 21 5/12 years and said he was born on the 30th September 1892 at Ormskirk, Lancashire. His height was 6 feet ¾ inch chest 33 to 36 inches, complexion fresh, eyes blue, hair dark brown and he had a scar on the left side of his face and on his left thigh and a tattoo of a butterfly on his right arm. He said he could ride a pedal cycle but could not swim. He gave his religion as Church of England and details of his next of kin as his father, William Hardie Quarrie of Baldock Street, Royston.

He was medically examined on the 26th February 1914 at Police Headquarters at Hatfield by the Police Surgeon who declared: I hereby Certify that I have examined the above Candidate as to his health and bodily strength and consider him fit for the Constabulary of this County. Lovell Drage Surgeon.

Harold was Appointed as Police Constable 313 on the 9th March 1914 and started his Probationary Training at Police Headquarters at Hatfield earning £1/4/6 per week.

He was Attested before Frederic W. Anson J.P. and R. Cecil Peake J.P. at St. Albans on the 20th June 1914. On the same day he was taken onto the Roster and posted to C Division at Watford.

On the 26th September 1914 Frank passed his Ambulance certificate, an important qualification which entitled him to wear a badge on his lower left tunic sleeve to show he was trained in basic First Aid.

General Order 118 of the 21st July 1915 is a list of 96 officers which included the Chief Constable, 43 Constables who were Army reservists who were recalled and 50 Constables and 2 Sergeants who volunteered for military service. Harold is shown as PC 313 Quarrie H.H. C Division who enlisted in the Hertfordshire Yeomanry on the 11th June 1915 with PC’s 301 Allen, 217 Lake and 308 Clark.

Harold’s Army Service Record has not survived but from his Medal Roll Index Card, Medal Rolls and a newspaper article the following is known: Harold Hardie Quarrie joined the Hertfordshire Yeomanry as Private 2549 (later 105808 under re-organisation) and landed with them on the 16th November 1915 in the Balkan Theatre 2b) Gallipoli and Aegean Islands. A newspaper article about his retirement stated he had served in Egypt and Mesopotamia.
He was later awarded the 1914-15 Star and the British War and Victory medals.

Like every other soldier Harold was granted 28 days leave on demobilisation. He would have used this time to arrange his re-joining of the Police. As part of that process he would have had to undergo a medical examination with the Force Surgeon at Police Headquarters at Hatfield. He was examined on the 6th March 1919. The end of his leave period would have coincided with the date of when he re-joined the Police.

The Electoral Roll of 1919 lists Harold and his brother Sidney as living at Baldock Street, Royston.

General Order 66 of 9th March 1919 listed 4 Police Officers who, having been released from H.M. Army, had been re-appointed to the Force. Arthur was shown as: PC 313 Quarrie H.H. C Division at Watford from the 27th March 1919 on £2/8/0 per week. Each officer had to be formerly re-attested. The Superintendents concerned had to report to Headquarters the date and place of Attestation and before whom taken.

His period of Army Service from the 16th June 1915 to the 26th March 1919 was deemed to count as Police Service for pension purposes Vide Standing Joint Committee Resolution 35 dated the 9th October 1914.

Harold was part of a detachment sent to Luton to help quell rioting between the 20th July and the 5th August 1919. 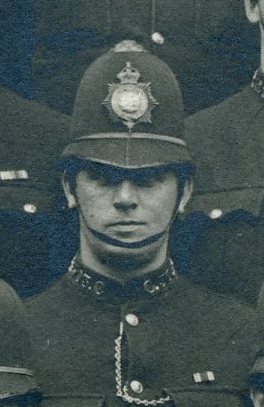 Harold was recorded as being off sick for a day on the 13th September 1919 with Malaria which seems slightly odd, but it may have occurred at the end of a period of leave.

General Order 98 of 23rd May 1920 instructed Harold that from the 25th May 1920 he was being transferred from C Division at Watford to R Division at Headquarters. The Electoral Rolls of 1920 to 1922 list Harold as living at 9, Glebe Cottages, Hatfield.

Harold married Amy Charlotte Foreshaw on the 10th March 1923 at Watford. No record of them having any children has been found. The Electoral Rolls of 1923 and 1924 list Harold and Amy as living at 28, Cecil Crescent, Hatfield.

Promotion To Sergeant And Transfer.

General Order 73 of the 23rd April 1924 informed Harold that he would be promoted from the 24th April 1924 to the rank of Acting Sergeant with an increase of pay to £5/0/0. Then General Order 75 of the 25th April instructed Harold that from the 7th May 1924 he was being transferred from R Division at Headquarters to A Division at Bishops Stortford, to occupy the house being vacated by Police Sergeant Rolls. The Electoral Rolls of 1925 to 1927 record Harold and Amy Quarrie as living at Pleasant Road, Bishops Stortford.

Rather belatedly General Order 132 of the 14th August 1924 announced that Harold was one of eleven successful candidates who sat the Examination for Promotion from Police Constable to Sergeant on the 2nd February 1924.

General Order 62 of the 4th May 1926 concerned the Emergency Regulations of 1926 and instructions for 50 Hertfordshire Police Officers, made up of three Inspectors, seven Sergeants and 40 Constables, to be on standby should the Secretary of State call upon the County Force to draft men elsewhere at short notice. These included officers from A,B,C, D and E Divisions. Orders for equipment and clothing would be issued if and when necessary, but the men were advised that they would require some sort of haversack. Harold was one of the Sergeants named in the list but there is no record of him being called upon.

Between the 12th and the 23rd January 1928 Harold was off sick with Malaria undoubtedly a lingering after effect of his war service.

On the 8th February 1928 Harold was transferred from A Division at Bishops Stortford to C Division at Watford. The Electoral Roll of 1928 lists Harold and Amy Quarrie as living at 10, Souldern Street, Watford.

On the 22nd January 1929 Harold and Sergeant 96 Joseph Wallen were cautioned by the Chief Constable for failing to give a Constable instruction concerning a fatal accident at Watford on 1 January 1929.

On the 11th September 1933 Harold was transferred from D Division at Great Berkhamsted to E Division at Stevenage.

On the 21st January 1934 Harold and a PC 231 Dunsby were cautioned by the Chief Constable for making a false statement in a report submitted to the Inspector E Division respecting the delivery of a Firearm Certificate.

Harold was commended by Sir Joseph Priestly K.C., D.L., J.P. Chairman of Hitchin Petty sessions on the 18th February 1936 for his action in effecting the arrest of D. McMahon on the 11th February 1936 on a charge of stealing money from the George and Dragon Hotel, Baldock, vide F.O. 136 of 30th February 1936.

From the 20th September to the 11th October 1938 Harold was off work sick with a cut to his right thigh which was recorded as having happened on duty.

In the 1939 Register Harold a Police Sergeant and Amy Quarrie are recorded a living at 18, Walkern Road, Stevenage.

Harold retired on a medical pension on the 13th December 1939.

Published on the 22nd December 1939 in the Hertford Mercury and Reformer under the headline: Stevenage Police Sergeant Resigns. PS. Quarrie’s 26 Years’ Service:
PS. Quarrie, of Stevenage, has resigned from the Hertfordshire County Constabulary on account of ill-health, after completing nearly 26 years’ service. He had been stationed at Stevenage for the past 6 years. Joining the Police Force in 1914, P.S. Quarrie was stationed at Watford, but two years later enlisted in the Hertfordshire Yeomanry, and served in Egypt and Mesopotamia. Upon being demobilised, he resumed duty at Watford. In 1920 he was transferred to Hatfield as a clerk, and remained there for four years. He was then promoted Sergeant and transferred to Bishops Stortford. PS. Quarrie afterwards served at Watford and Great Berkhamsted before coming to Stevenage. In each of the areas in which he served, PS. Quarrie was very popular with both Police and public. As a young man he was one of the finest athletes in the Force, besides being a good runner, he played cricket, football and golf.

Harold Hardie Quarrie of Greenbanks, Greenbank Road, Watford died on the 17th May 1978.