By Hilary K, from research by David Lewis

In the early hours of March 6 1867, James Mills came across two men lying in the road near an overturned cart. One had terrible injuries to his face; the other was dead.  No doubt Mr Mills was horrified when he realised that these were the two policemen he’d been out with earlier in the evening. 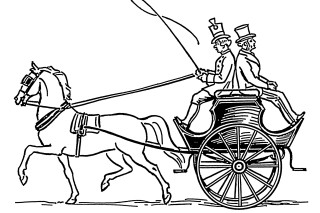 A dog cart
Mr Mills, the district inspector of cattle, had been inspecting stock at Mangrove Farm with Superintendent Pangbourne and a Police Constable (not named). Afterwards, they all stopped at the Green Man Inn in Offley for refreshment.

Mr Mills left to walk home and the policemen stayed until midnight. They set off back to Hitchin in their horse-drawn cart and passed Mr Mills on the way down Offley Hill.

About a mile outside Hitchin it is thought the horse ran up a bank at the side of the road, causing the cart to overturn and throw the policemen out. 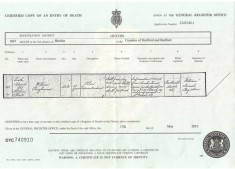 Pangbourne's death certificate
A surgeon, Mr Shillitoe, was called and he found shocking fractures to Pangbourne’s skull which would have caused death immediately. The Superintendent’s body was removed to his home.

On Wednesday an Inquest was opened, but adjourned as the Constable was too seriously injured to give evidence.

The cause of death on Pangbourne’s death certificate is given as “Fall from dog cart upset whilst driving same. Skull fractured.” 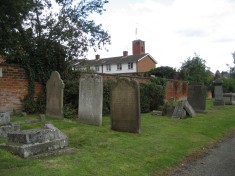 Pangbourne's grave
Superintendent Pangbourne’s funeral took place on Saturday March 16 with the Chief Constable of Hertfordshire and 50 members of the force attending.

He was buried in St John’s Road Cemetery, Hitchin.

His headstone reads:  “Here lie the remains of William Pangbourne. Late a Superintendant of The Herts Constabulary who died while in the execution of his duty in the night of the 5th of March 1867 aged 51 years.  In Memory of this excellent and much respected Officer, deeply lamented by his bereaved Widow and Family.  Colonel Robertson, Chief Constable of Hertfordshire, the Superintendants, Inspectors and Constables, of the Police Force have erected this Stone.”

According to the local paper, Mr Pangbourne  “.. was an intelligent, energetic, active, and useful officer, and was most deservedly respected by his colleagues and the public.  He will be very much missed.”

There was also a short paragraph in the Pall Mall Gazette.

Superintendent William Pangbourne was 51 when he died and had been in the Police Force for 25 years.

Census records show that in 1841 he was a game keeper, living in Hemel Hempstead with his wife Herodias and 2 children. He joined the police in 1842, 5 years into the reign of Queen Victoria and just 1 year after the Hertfordshire Constabulary was formed.

Again from the local paper: “We are sorry to hear that Mr Pangbourne has left a wife and nine children: but it is satisfactory to know that less than two years ago he insured with Mr Thomas Carter, of Hertford, in the Accident Insurance Company for a sum of £800 payable at death.”

Much of the information in this story was taken from an article in the Hertfordshire Mercury on March 16 1867. 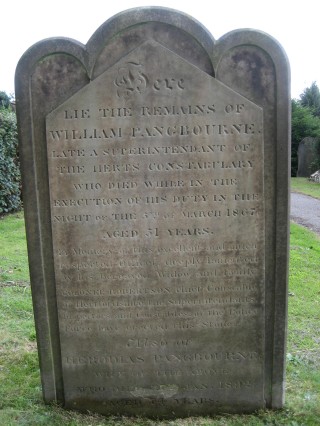