The following are accounts found in the Herts and Essex Observer and report the Petty Sessions proceedings. They give quite an interesting idea of what was going on, on the home front during the Great War.  The accounts are largely in the words as reported in the paper

Private William Dell, a soldier stationed in Bishop’s Stortford admitted stealing 12s belonging to Mr James Dixon of South Street on 27/7/15. The Prosecutor stated the Defendant and a corporal were billeted on him, on 26/7/15 he left 12 shillings on a shelf in his shop. The next day it was missing. Sgt Corduroy of the Military Police said the prosecutor complained to him that he suspected one of the soldiers billeted on him.  He took them to the room where the both stripped and in one of the defendants’ socks he found the 13s 6d. He asked defendant if this was his money. He said “yes, mixed with my own.”

The defendant was said to be of excellent character. The bench bound defendant over under the 1st Offenders Act for 12 months. 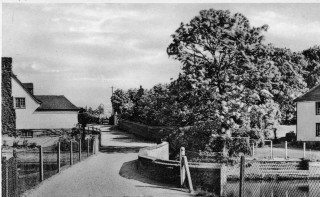 Sheering Mill
Pte William Findlay of a regiment stationed in the district was brought up on custody charged with stealing a purse containing £1.7s. 9d, the property of Mrs Annie Vale of Sawbridgeworth. The Prosecutrix who lives at Sheering Mill Lane stated that about 9.45 p.m. on this date she purchased a quarter bottle of beer at the White Lion which she intended taking home for supper.

Whilst outside she saw two soldiers, one the defendant. They asked her to purchase them some beer. She refused but offered them a drink from her bottle. They then dragged her down the London Road, after which the other man left. The Defendant accompanied her to Sheering Mill Lane and attempted to assault her. Immediately he had gone witness missed her purse which contained £1.7s. 9¼d. She identified her purse as her property.

Wm Henry Frederick Johnson 32 Dane Street was on remand charged with the theft of a Bike, being the property of William Reed.  He was also charged with being an absentee under the Military Service Act.  This was adjourned one week to enable Sgt Sullivan to make inquiries of military about the defendant with the potential for a formal charge of failing to report to be made. There as some doubt over whether the Defendant understood that he needed to report as he had a discharge paper. The Defendant said he was quite willing to go into the army but not as a conscript. Charge of theft adjourned and defendant to be handed over to military.