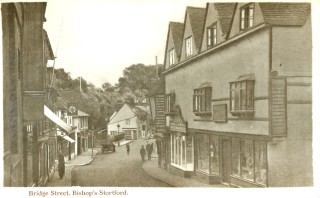 On 28 November 1914, Ernest Albert Colclough, a soldier, was brought up in custody, and at the Police Court before H Ken Esq (in the chair) and G S Streeter Esq was charged that he did, on 20th November at Bishop’s Stortford, steal and take away two polonies, value 2d, the property of Mr Charles Edwin Swain.

Mr Swain, a pork butcher of Bridge St, Bishop’s Stortford, stated that his attention was first called to the matter by Colour Sgt Jelley. He himself did not see the defendant take the polonies and, when he had spoken to him, he declared that he had not got them. A short time afterwards, however, they were found on the floor of Mr Swain’s shop, near the window, and to get at them a person would have to reach over a partition.

Colour Sgt Thomas Henry Jelley said that, on the previous Friday evening, he had been in company with other Sergeants when his attention was directed to a crowd of soldiers in a pork butcher’s shop.  The men were crowding up against the counter in order to get served and he saw three or four of them deliberately reaching over the window partition and taking polonies exhibited in the window.  The defendant was one of them.

Jelley entered the shop, touched the defendant on the shoulder, and said “This is not good enough. It is not playing the game. Go and pay for them“.  Colclough said he had not got any polonies.  Mr Kent asked the policemen if he had seen the defendant take them and he replied  “Oh yes, personally”.

Colclough, who had nothing to say, was remanded in custody until the Thursday when he was brought before F Flinn Esq (in the Chair) G S Streeter, W Holland and H Kent.  The evidence was repeated, and Colour Sgt Jelley stated that when he had accused the defendant of stealing the polonies he had said he had not got them but also wanted to bet him half a crown to a penny that he could not find any on him.  Colour Sgt Joseph Jacques corroborated.

Cpl Robert Duckell deposed that on the Friday evening he was on police duty in Bridge St and, about 9.10pm, he had entered a pork butcher’s shop and there he saw Colour Sgt Jelley talking to the defendant. He inquired as to the matter involved and the Colour Sgt informed him that the defendant had been stealing polonies from the shop.  Colclough could hear what was being said.

Duckell felt in the defendant’s pockets. He then heard something drop to the floor and saw two polonies lying at the feet of the defendant.  Duckell drew the attention of the proprietor of the shop to the occurrence and then arrested the defendant. Mr Swain also repeated his evidence and, in answer to the Bench as to whether the defendant had been drinking or not, the witness said he could not say as there was a crowd in the shop and that when his attention had been called to the defendant, the Military Police had got him.  All that the witness had said to the defendant was “Why didn’t you pay for them and save a bother?”

Colclough elected to be dealt with summarily and pleaded not guilty saying that he was not in his right senses at the time and that he was drunk.  Mr Kent asked for the evidence of the Sgt and Cpl as to his condition. Cpl Duckell recalled, and said he did not consider the defendant drunk, at least not completely drunk.  He was still in his right senses and thus capable of understanding what he was doing.  Mr Holland suggested that  there were a lot of soldiers both inside and outside the shop and it was quite possible for someone else to have dropped the polonies.

Colour Sgt Jelley was recalled to the stand and said he could certainly agree that the defendant was not drunk but was capable and knew what he was both doing and saying.  Colclough said he could only express his sorrow that it occurred. It would not have happened had he not been under the influence of drink.

Mr Flinn said the Justices had considered the case and there was no doubt the defendant was guilty but taking into consideration the fact that nothing was known against him he would be bound over in the sum of £5 to be of good behaviour for six months, with no conviction to be recorded.