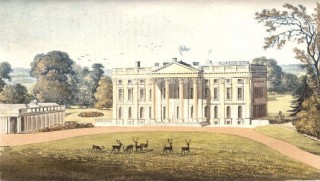 On Sunday morning last between one and 2 o’clock, a murderous attack was made by five men armed with bludgeons and stones on three of Lord Ebury’s gamekeepers at Moor Park, Rickmansworth. The keepers in question were watching some preserves at Sandy Lodge farm, not far from Moor Park, when the five poachers set upon them with bludgeons and stones.

Benjamin Green was shockingly maltreated by blows on the head, and while down on the ground and covered with blood, the ruffians kicked him in the back and on the body, rendering him insensible. Upon slightly recovering and attempting to get up, the brutal fellows dashed two large stones in his face. George Brown was likewise similarly treated.

James Green, however, has not received such as severe injuries as his father or George Brown. The ruffians left behind them snares, nets, etc, to the number of 19, and after injuring the gamekeepers in the manner described, managed to get clear off. Mr Codd, surgeon, of Rickmansworth, is in attendance on the injured men, who all are in a most precarious state. The police of the district are in active pursuit of, and have some good clue to, the miscreants. Lord Ebury offers a reward of £100 on the apprehension and conviction of the offenders.