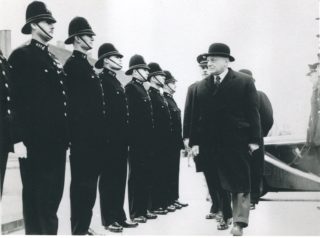 On 28 January 1927 Police Federation brought to the Chief Constable’s attention the fact that certain members of the force while on strike duty at Ilkeston in Derbyshire, were poisoned by food supplied through the Derbyshire Police Authority which necessitated their being placed on the sick list, through no fault of their own, and whilst so sick were put under stoppages of pay. Chief Constable decreed that the ofﬁcer’s sickness should be treated as an injury on duty and that an appropriate refund should be made to them.

Home Detention Curfew Scheme
The powers to introduce Home Detention Curfew under which selected short term prisoners may be able to spend up to the last two months of their sentence under an electronically monitored curfew licence are contained in Sections 99 and 100 of the Crime and Disorder Act 1998. Commonly referred to as ‘TAGGING’ by the media, it will commence nationwide on 28 January 1999. The main features of the scheme are: Prisoners serving sentences of from three months to under four years’ imprisonment may be eligible. The curfew period may vary from 14-60 days, depending on the length of the original sentence. The minimum period of the curfew is nine hours per day. It will usually be twelve hours, although there is no maximum and will normally be between 7pm and 7am. Failure to comply with the terms of the curfew, inability to monitor the curfew electronically and risk of serious harm to the public can result in the licence being revoked and the prisoner returned to prison to serve the remainder of their sentence. Monitoring services will be provided by contractors, Premier Monitoring Services. Whilst the priority to be given to individual cases will be an operational matter for local police, ACPO have indicated that HDC recalls should be treated as urgent cases. When recalled prisoners are in custody, the police should contact the nearest suitable prison establishment to arrange their return. Only when prisons are not taking new receptions due to population demands will they refuse. Once the receiving prison has been identiﬁed, the local PECS contractor will convey the prisoner back to prison. ‘Exceptionally dangerous’ prisoners will be the responsibility of the police. (General Order 4 of 1999)

Oxhey Police Station was formally opened on the 31/1/1953 by the Lord Chief Justice of England Lord Goddard. 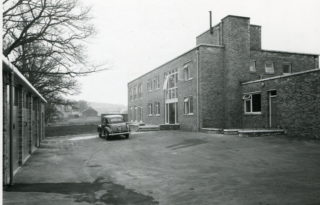 Early in 1989, the Force took delivery of a new Crime Reporting System. The system was developed and in place by the end of the year at all Divisions. The system allows for fast searches for stolen property and management of crime and statistics. A crime bureau has been established at HQ for the inputting of data on a 24 hour basis. (CIS)

On 1 February 1881, the force was reorganised into ﬁve divisions and the duties of the ofﬁces were laid down. For example, sergeants will attend one or other of the conference points in his section every night and will be constantly on patrol looking after the working of the men on his section. He will attend the scene of every offence committed within the section. The new divisions were:
“A” or Ware Division
“B” or Bishops Stortford Division
“C” or St. Albans Division
“D” or Hemel Hempstead Division
“E” or Hitchin Division
“R” or Reserve Division (HQ at Hertford).

Letter from the Home Office to the Chairman of Quarter Sessions for the County of Herts, reporting a system of private communication which appears to be in operation between individuals or societies and members of the Constabulary force, requesting that instructions may be given to the Constabulary of your county to prevent a practice which is open to very serious objection.
Sadly the report in the County Council minutes does not expand any further.