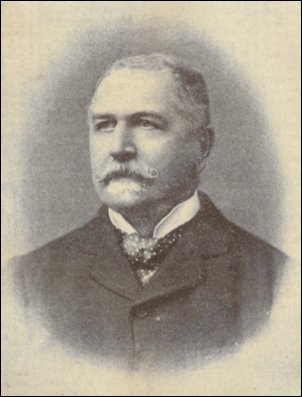 Lieut-Colonel H. Smith Daniell, Chief Constable of the county of Hertford, is the sixth son of the late Mr J. N. Daniell, of Sandown, Esher, Surrey. Born in 1839, and educated at Elstree and Rugby, he received his first commission in the 3rd Bombay Light Cavalry in 1856, before he was 18 years of age.

Having previously passed his drill in the Riding School of the 1st Life Guards, he was, on arrival in India, at once despatched in charge of a draft to join his regiment, then forming part of the Persian Expeditionary. Field Force. After taking part in a few final skirmishes at the close of that campaign, Cornet Daniell returned with his regiment to India, where the Mutiny had broken out. He accompanied the squadrons of his regiment, which formed part of the Central India Field Force under the late Field Marshal Lord Strathnairne (then Sir Hugh Hose) throughout the campaign, taking part in the action at Baroda (where he was wounded), relief of Sagar, siege and capture of Jhansi, battles of Koonch and Goolowli, capture of Calpee and Gwalior, and battle of Jowra Alipoor. Cornet Daniell also took part in the quelling of disturbance resulting from the Indian Rebellion in Central India, and was thrice mentioned in despatches.

On the return of the regiment to the Bombay Presidency in 1860 Lieutenant Daniell was appointed Adjutant and Acting Second in Command of Gujarat Irregular Horse, whence he was summoned by the late Sir Bartle Frere, then Governor of Bombay, to proceed to the province of Khandeish on special duty to effect the apprehension of a notorious outlaw. The outlaw, however, had surrendered previous to Lieutenant Daniell’s arrival. This was the introduction of the subject of our sketch to Police service, in 1861. He obtained an exchange of appointments from the Irregular Cavalry to the Khandeish Bheel Corps – a Corps raised by the late Sir Francis Outram, and forming part of the Police of Khandeish. Lieutenant Daniell’s appointment as Adjutant included the position of Assistant-Superintendent of the Khandeish Police, and from this date he served continuously in the District Police of Bombay, rising through the several grades of Assistant Superintendent and Superintendent, and serving in various districts of the Bombay Presidency.

In 1871, when serving as Chief of the Police in the Abmednuggur District, Captain Daniell distinguished himself in a single-handed encounter with two fully armed Sepoys of a native infantry battalion, who, after shooting down a Police Sergeant and a private individual, decamped from their regiment. Captain Daniell mounted, and, armed with an old Enfield muzzle-loading rifle, which he had seized from the Police Armoury, came upon the Sepoys in the open country some ten hours after their flight. Calling upon them to surrender and throw down their arms, they refused, and after vain attempts to keep them in check until the arrival of some of his men, whom he had outstripped, and to prevent their gaining the shelter of an enclosed temple, Capt. Daniell was compelled to receive their fire in the open. He returned the compliment, and his one shot passed from the arm of one of his antagonists into the body of the other. The more severely wounded man died, and the other was hanged in due course of law.

In 1874 Capt. Daniell was summoned by the late Sir Philip Wodehouse, Governor of Bombay, to take steps for the apprehension of a notorious Dacoit and outlaw named Homa Khengla, who had for three or four years been committing depredations on the range of hills dividing the high land of the Deccan from the low-lying sea coast, and his immunity from apprehension by the .Police of several districts had called forth strong remonstrances from the Secretary of State for India to the Government of Bombay, Capt. Daniell made such arrangements as he thought necessary, and entering the jungle tract of country haunted by the Dacoit and his band on the 16th June, he brought the leader, Homa Khengla, and two of his band as prisoners into Puna on the 11th of July. For this service a grant of £200 was made by the Government to Captain Daniell for distribution among the men who accompanied him, the captain himself receiving the high commendation of the Government of Bombay and of the Secretary of State, for the successful performance of the duty imposed upon him.

In 1879, when serving as District Superintendent of Police at Puna, and while the attention of the governing powers of India was fixed upon the war in Afghanistan, then in progress, a highly educated Brahmin, named Wapodes Bulwunt Phar key, employed in a responsible post in the Military Finance and Control Office, conceived the time to be a convenient one to raise a rebellion in the Decean, and restore a native Government. The “rebellion” became simply a grave and serious outbreak of Dacoity, and the responsibility for its suppression was placed in the hands of Major Daniell.

In the month of May, 1879, the Major, with 20 armed Police and a Sergeant’s party of 12 native Infantry soldiers, encountered, after a hard night and half a day of travel, a body of 60 or 70 Dacoits returning to their fastnesses in the hills, loaded with plunder from the palace of a wealthy native nobleman. A sharp encounter ensued, with the result of the death of several of the Dacoits, the leader being shot down by Major Daniell himself, and the recovery of the whole of the stolen property, of the value of over £10,000, in jewels, and gold and silver. The organiser of the outbreak, the Brahmin, Wapodes Bulwunt, had, in the meanwhile, and in the face of the active measures taken by Major Daniell, disappeared.

At the end of July information reached the Major that Wapodes was residing in a small village in the territory of the Nizam of Hyderabad, and was believed to be endeavouring to organize forces to raise the standard of rebellion in the territories of our ally the Nizam. Major Daniell proceeded to Hyderabad to interview the British President and the Minister of the Nizam’s Government, and leaving Hyderabad at 7 a.m. on a Sunday morning, he travelled by rail till 5.30 p.m., when, accompanied by an English Inspector and two native Constables, Major Daniell obtained a guide, and walked throughout the night to the village where he hoped to find the Brahmin. The Major reached the village at 7.30 on the following morning, after a hard night’s tramp of 26 miles over a rough country, with deep, moist, adhesive soil. Finding the object of his search had left the village 24 hours earlier, Major Daniell, who was now joined by a native Officer of high position in the Nizam’s service, and by a body of cavalry, selected seven Officers and men, and despatching horses across the stream which ran by the village, he entered the river, now a swirling torrent half a mile wide, with some empty gourds tied round his body, and, thus supported, and surrounded by men of his party who prevented his being carried away by the torrent, he reached the opposite shore, a mile below the spot whence he had started. Major Daniell and his small party, starting from this river about 4 p.m. on the Monday, traced the Brahmin and a companion from village to village until two or three o’clock on the morning of Tuesday, when Major Daniell entered an old deserted temple, and came upon the objects of his quest. The apprehension of this Brahmin at once put an end to any idea of a serious rising; but the Major had to do seven months’ arduous work in quelling the disturbances which had arisen in consequence of the Brahmin’s action. The sum of £400 was made over by the Government for distribution among the officers and men who had participated in this arrest. The regulations of the Government of India do not permit of the participation in pecuniary rewards by any Commissioned Officer. Major Daniell again received the high commendation of the Government of Bombay, the Government of India, and the Secretary of State for his services on this occasion. The late Earl of Lytton was Viceroy of India at the time, and, having written to the Governor of Bombay, asking him if the disturbances in the Presidency could be quelled without extraneous aid, received a reply from Sir Richard Temple, Governor of Bombay, to the effect that the matter might be well left as it was in the hands of the best Police Officer he had ever met with. The Government of India directed that Major Daniell should be considered to have held the special rank of Deputy Inspector-General of Police for the Bombay Presidency during the period of his splendid services in connection with the suppression of this rising.

Early in 1850 Major Daniell returned to England on leave, and in October of the same year was elected Chief Constable of Hertford, and retired from the Army with the rank of Lieutenant Colonel.

In 1887 Colonel Daniell was selected by Her Majesty’s Secretary of State for the Home Department to organise and command the Special Constables of the Metropolitan, sworn in for the purpose of assisting the Police in the suppression of what are known as the Trafalgar Square disturbances in November of that year. Receiving his appointment and instructions from the Home Secretary on a Wednesday, Colonel Danieil effected the organisation to such purpose that, on the following Sunday, out of 13,000 Special Constables sworn in, 8,000 were on duty in detached bodies in various parts of the Metropolis and of the City of London, each body commanded and controlled by Officers of distinction and experience, Colonel Daniell has often said that the work of those four days, from the Wednesday to the Saturday evening, was the most arduous he ever went through. For his services in this connection, he, and the superior Officers under his command, received the high commendation of the Commissioner of the Metropolitan Police, and of Her Majesty’s Secretary of State for the Home Department.

Colonel Daniell stands 6ft. 2in. ‘high, and is a well-proportioned man. He married in 1869 the daughter of the late Lieutenant-General C. M. Barrow, C.B., and has two children – a son and a daughter. He is decorated with two medals and clasps.