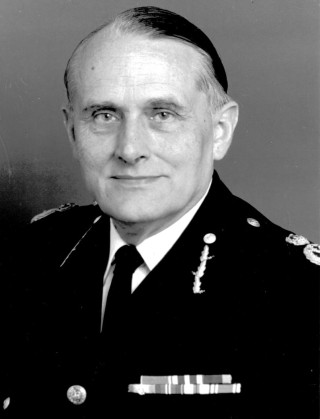 Adrian Clissitt was born in South Wales in 1924. Upon leaving school, he went to Hampshire where he hoped to become a monk at Farnborough Abbey.  In 1942, he was called-up into the Royal Navy and as a young Lieutenant he took part in the Normandy Landings on D-Day. Miraculously, he survived when his vessel took a direct hit from a German dive-bomber. In the last year of the war he joined the Royal Marines and served in the Far East. He joined the Metropolitan Police in 1951 and was promoted to Superintendent (in charge of the Fulham division) in 1964. He later served in Leeds, where he was promoted to Assistant Chief Constable. In 1974 he transferred to Hertfordshire Constabulary as a Deputy Chief Constable, and was promoted to Chief Constable three years later.  He was awarded the Queen’s Police Medal in 1978 was made a Commander of the British Empire (CBE) in 1984. He died in 2002.