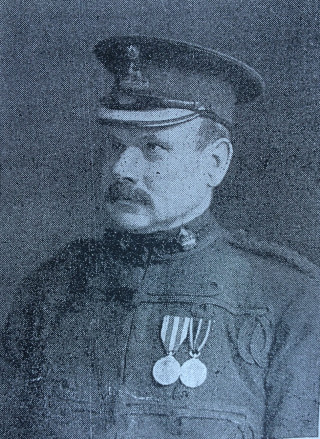 At the Annual Meeting of Hertfordshire County Council held at the Shire Hall on Monday, the various committees were appointed as recommended by the Selection Committee, without discussion, excepting in regard to the nine representatives of the Council on the Standing Joint Police Committee.  Upon this the Vice-Chairman raised an important point.  He first of all pointed out that this was a statutory committee with absolute powers, half being appointed by this Council, and half by the Court of Quarter Sessions, and once the committee was elected it could do whatever it liked without any interference from this Council.  It need not even report to this Council, although it did so as a matter of courtesy.

In the report of the committee now presented he found it stated that: ‘At the urgent request of General the Marquess of Salisbury, the Committee has given the Chief Constable leave of absence to enable him to take up the post of Assistant Adjutant and Quartermaster-General to the Division under Lord Salisbury’s command.  Supt William Wood, of Watford, a thoroughly capable officer of 35 years’ service, who had been Deputy Chief Constable for some years, had been appointed to act as Deputy during Major Law’s absence, but he has been advised to consult the Inspector of Constabulary at the Home Office in any serious matter, or if any difficulty arises.

As regards the Special Constabulary, 4,000 strong, the Deputy Chief Constable will rely largely upon the judgement and advice of the Chief Staff Officer, Major A. St Ledger, of Bragbury End, Knebworth.  Proceeding, Mr Barnard said that he was not cavilling at any of these appointments but he was very jealous of their rights as a local governing body, and was not prepared to give them up to anybody else, particularly a Government Department.  The duties of the Home Office Inspector of Constabulary were purely administrative, and he (Mr Barnard) did not think he could in any way take the responsibility off Supt Wood’s shoulders in regard to the actual police work in this county.

Major St Ledger was no doubt a very excellent man, but they did not think they ought to allow Supt Wood, who was taking Major Law’s position, to be subordinate to Major St Ledger, because the latter, by statute, must be subordinate to the Chief of Police in this county.  Therefore having regard to the present times and the important duties which fell upon the Standing Joint Committee he thought it was the duty of the County Council to appoint nine of their best men upon that committee for the forthcoming year, and as three of the members nominated were performing military duties, and could not be in two places at once, he suggested that the Council should for this year appoint some one else in their places.

The three members referred to were Mr Bashby, who is serving with the National Reserve, Colonel Heaton-Ellis, and Capt, F.C. Puder, who is in the Hertfordshire Regiment, and after some discussion the Vice-Chairman’s view was accepted, and the Earl of Essex, the Vice-Chairman, and Mr Henry Brown (Watford) were appointed in their places.