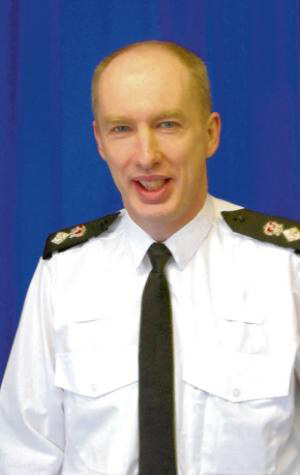 Andy Bliss became Chief Constable of Hertfordshire in June 2011.
He joined Sussex Police as a Police Constable in 1982 and progressed through each rank up to Superintendent as both a uniform and detective officer.
As a Detective Inspector he was seconded to work as a Regional Crime Squad officer in London in the area of international and organised crime.
He then became Divisional Commander for a large mixed urban/rural area of West Sussex in 1998 before taking command of Brighton and Hove Division.
During his time there he led major improvements in performance and won Home Office funding for an innovative approach to tackling crime against minority communities. He was also the operational commander for the policing of two Labour Party Conferences.
He was appointed as Assistant Chief Constable of Essex Police in 2004. Towards the end of 2006 he became Deputy Chief Constable. In this role he led on Corporate Development, Legal Services, Media and Public Relations and Professional Standards. He was also the strategic lead for the ground breaking collaboration venture with Kent Police and led the implementation of the regional Counter Terrorism Intelligence Unit (CTIU).
He briefly commanded Essex Police as Temporary Chief Constable between July 2009 and September 2009.
Nationally he Chairs the National Policing Drugs Committee and is a member of the National Policing Crime Business Area. He also chairs the UK Drugs and International Drugs Threat Group co-ordinating all UK law enforcement activity in relation to drug related organised crime. This is a key element of the Government’s Serious and Organised Crime Strategy.
He is also the National Police Chiefs’ Council lead for Heritage and Cultural Property Crime working with the National Crime Agency, English Heritage, National Museums and other agencies to tackle criminality which targets the nation’s historical and cultural assets.
He was awarded a BA (Hons) degree in History and Archaeology at Durham University in 1982 and a Post Graduate Diploma in Applied Criminology at Cambridge University in 2003. He attended the Strategic Command Course at Bramshill Police Staff College in 2002.
He was awarded the Queen’s Police Medal (QPM) in Her Majesty’s 2010 New Year’s honours.
He is married to a classical musician. He skis, cycles and enjoys the countryside. He speaks French and reads widely especially about history and politics. He enjoys classical music, particularly opera and he maintains an active interest in archaeology.