An appeal for men to join up 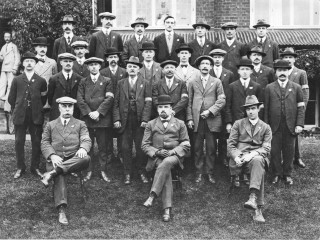 In August 1914, the first appeal for ‘Specials’ to help police the county was issued by Major Law, the Chief Constable of Hertfordshire. He issued a notice to the following effect:

Arrangements have been made for the enrolment of Special Constables to assist the Herts County Constabulary in the preservation of order.  All British citizens of good physique resident in the police jurisdiction of the county of Hertfordshire are eligible but it is specially desired that no man fit for service in the navy, army or territorial forces shall apply.  Special Constables shall be liable to service for a minimum of 3 hours out of every 24 hours if required and give services free of cost.  Each Constable when on duty will be given the necessary equipment and warrant card, truncheon, armlet and whistle.

Over the following months, the new recruits were put through their paces, often in public. On the afternoon of Wednesday 12 September, a very large muster of special constables was held in the grounds of Bishop’s Stortford College under the command of the section leader Col Healey CMG.  The company was drilled by ex Col Sgt Ackerman.

The following month, the Special Constables went on a route march to Little Hadham to practice movements. The exercise was concerned with apprehending criminals hiding in woods by Hadham Hall.  Mr & Mrs Minet gave them tea.

The following week, an ‘excellent programme’ was produced by Healey and ex Col Sgt Ackerman, with the Special Constables practising several movements across the fields towards Thorley. The ‘Specials’ were hospitably entertained by Mr and Mrs Streeter at Thorley Place and subsequently marched via the Green Man and Windhill.  A few days later, they went on another route march and afterwards were entertained to tea by Mr R C Gosling at Hassobury.  In each instance Col Healey voiced the thanks of the men who also gave hearty cheers for their hosts.