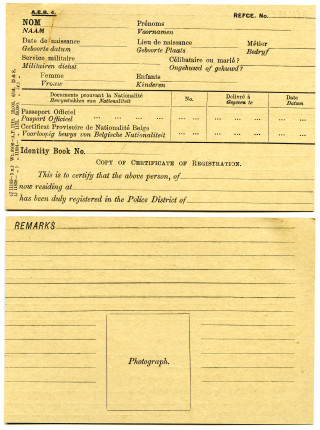 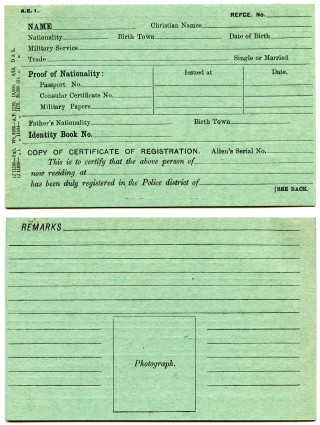 As the war started, suspicion of foreigners, particularly Belgians and Germans began to be reported in the local newspapers.

Reports in The Herts and Essex Observer show that arrests of foreigners were being made locally from as early as August 1914.

On August 22 it was reported in the Herts and Essex Observer that Paul Kluger was arrested in Hoddesdon as a “suspected German”, although he maintained he was Swiss. The following week, this is followed up with the information that another man was charged with him at Cheshunt. The case finally came to trial on Sept 15.  Both men were charged with not registering and with travelling without permits.  Both were in fact German but had been in the country a long time.  They were given the choice of a fine or prison but which option they took was not recorded.

On September 12 at Hertford Police Court a German governess was cautioned that she must inform the police and get a permit if she travelled more than five miles from her registered address.  No further action was taken, but similar cases at Cheshunt saw men fined.  Most of these appeared to have genuinely travelled for their employment.  Did she receive a lighter punishment because she was female?

On September 26 under the headline “Charge against foreigner in Bishop’s Stortford”, there  was a report of a man who had trespassed on the railway at Twyford.  He was considered to be an alien, but claimed to be a “Russian Pole”.  The Magistrates seemed not inclined to believe him and the case was adjourned for further enquiries.  (His story turned out to be true and he was discharged the following week.)

Unauthorised travel was obviously a cause for concern. On March 6 1915, Henry Sonnett, a German from Hertford, was in the news. He had been given permission by the Police to travel to Waltham Cross in search of work, but he went to London as well so he was jailed for a month !

Belgian nationals also came under suspicion. On November 27 1915, Jean Van Hoof, a Belgian refugee, was charged at Hertfordshire Assizes with setting fire to various haystacks.  The arresting police officer was not named.  In any event there was no evidence and Hoof was acquitted.

As the war continued, contingency plans were put in place for a possible invasion. On February 27 1915 it was reported that “In case of invasion” -an order had been distributed to every house in Bishop’s Stortford by the Special Constables.  It stated that “there was no cause for uneasiness or alarm in connection with the German threats of invasion”.  It further went on to emphasise the role of the police and specials in helping during states of emergency and warned that “The civil population must not allow themselves to be alarmed by rumours circulated by unauthorised persons.”