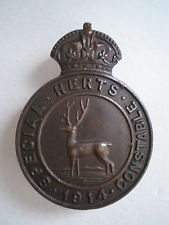 The Earl of Essex, as Vice-Lieutenant for the County and Hon. Chief Commandant of the Special Constabulary, has issued an appreciative and interesting letter to the section leaders, of which the following is a copy:

I shall be glad if you will impress upon the special constables of your respective sections that they are rendering valuable service to the county, and that the duties they are now performing are of great assistance and a real help at a time when it is greatly needed.

The County Constabulary is now very much under strength owing to the large number of men who are serving in His Majesty’s forces.

The many additional duties which have devolved upon the regular police owing to the war could not be efficiently performed but for the assistance of the Special Constabulary.

It is gratifying to know that this assistance benefits the county to the extent of about £6,500 per annum.

This alone proves that in addition to providing a large reserve capable of dealing immediately with any serious emergency, the Force is benefitting the ratepayers of the county very substantially during a great financial strain.

I hope that all special constables will continue to act, also that the Force may be largely augmented, as the service of every man in the county may be required at any moment for work of the greatest importance.

The Deputy Chief-Constable and the Chief Staff officer agree that the services of the Special Constabulary are invaluable, and urge the necessity for continued service and for a substantial augmentation of the Force.

A new and distinctive badge for the Special Constabulary has been approved and will be shortly issued.