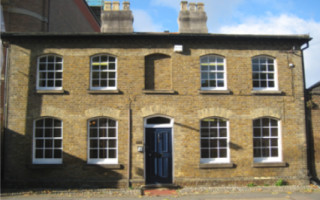 As the dates still visible on its Victorian terraces would suggest, the majority of the buildings on Estcourt road in Watford were built between 1865 and 1892. Located on the eastern edge of the town centre, the farmland on which the street was built had been sold off by the wealthy landowner and politician, Thomas Henry Sutton Sotheron Estcourt. Before the turn of the century, the southern-most end of the street had formed part of Beechen Grove and it was here that the town’s first purpose-built police station was erected. Despite much of the new street appearing on the Ordnance Survey map of 1871, the site of the new police station was still empty. It is therefore likely that construction of the detached, two-storey, double fronted police station took place sometime between 1872 and 1877.

By 1878 at least, Inspector Stephen Chapman and his men had relocated from their old station on the High Street and taken occupancy of the new premises. Chapman resided in the station’s living quarters, situated on the first-floor. To the rear of the building lay a yard and stable block. In 1881, a Constable was allocated the pivotal job of caring for the station’s horse and cart. Prior to this, groom boys had been employed at a number of the county’s police stations. By 1882 Inspector Chapman had been succeeded by a William Hummerstone, who took up residence in the station. In 1884, a Sergeant named C. Purkis was also living in the building. By 1886, Hummerstone had been promoted to Superintendent and, whilst still in overall charge of the Watford division, had been relocated to St Albans. Consequently, an Inspector named Thomas Galpin became the most senior officer in residence at Watford.

Although the precise layout of its interior is unknown, it would appear that the police station encompassed a room which could be used as a court; as a number of criminal cases were heard by Magistrates on the premises. On 3rd November 1883, the station was used by Major Copland, a County Magistrate, when presiding over the charge against Signalman Frederick Ridgeway. Ridgeway was accused of causing a railway accident at Watford Junction, which had resulted in one fatality. Superintendent Hummerstone presented the case for the prosecution, which included a lengthy statement from Ridgeway in which he confessed his negligence.

Tragedy occurred at the station on 29th September 1886, when a prisoner committed suicide in his cell. R. C. Raymond had been arrested the previous evening for drunkenness and when a Constable delivered his breakfast the following morning, it was discovered that he had hanged himself.  It is likely that the incident prompted a number of improvements to the station’s cells, as from November that year straw palliasses were supplied to prisoners for sleeping on.

Watford and its population expanded rapidly throughout the 1880’s, prompting the Constabulary to periodically increase the police strength in the town. Consequently, the police station at Beechen Grove was quickly outgrown and despite having served its purpose for little more than a decade, larger premises were already being sought. The building closed its doors as a police station at the end of 1888, but retained an authoritative function as the town’s Weights and Measures office. At the height of its new found jurisdiction, the building’s official title was “The Office of the Inspector of weights & measures, food & drugs, petroleum & explosives, fertilisers & feeding stuffs, pharmacy and poisons for the county of Hertfordshire, Western Division”. Despite the surrounding landscape undergoing major redevelopment in the 1960’s -including the routing of the town’s new ring road just a few metres from the front door- the former police station remained intact and continued to serve as a Weights and Measures office until 1973.

In 1992 the building was acquired by the mental health charity Guidepost, for use as a community centre. Having been renamed ‘Henry Smith House’, as a mark of appreciation for funding supplied by the Henry Smith charity, the new centre was officially opened by the actress Prunella Scales in September that year. Today, Henry Smith House continues to host a variety of drop in sessions, classes and groups and recently celebrated its thirtieth birthday. Whilst there are seldom original features left inside, the building has retained much of its Victorian exterior. Meanwhile, a cupboard under the internal staircase reveals the start of what appear to be steps. These almost certainly once led down into a basement, which has since been in-filled. The possibility that the two remaining steps were once trodden by those entering police custody is a fond topic of speculation.