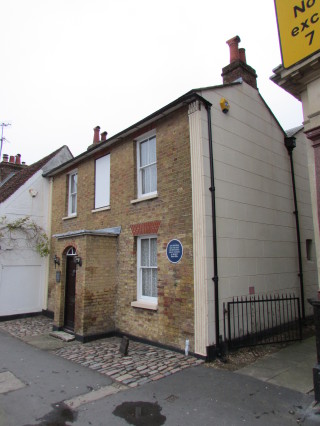 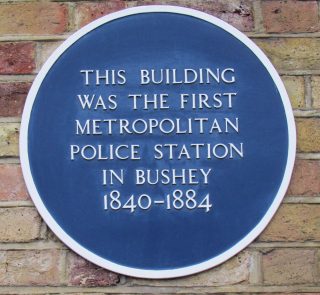 When the Metropolitan Police Act of 1839 expanded the territory of London’s police force, the new boundary fell half a mile short of Watford. It did however encapsulate Bushey and officers from the Metropolis began policing the village a full year before the Hertfordshire Constabulary was conceived. The first premise to be used by the Metropolitan officers was an existing house located on the High Street. Constructed in 1835, the two storey, yellow brick house stood opposite the 13th century church of St James. When acquired by the police, the property was modified to incorporate a small cell and stables to the rear. It is likely that the police station comprised accommodation for two police officers and their families as the census of 1851 shows Constables Zachariah Hollier and John Poplett to be in residence there.

During the second half of the twentieth century, the footprint of the village expanded considerably and with its population on the increase, the adequacies of its meagre police station were inevitably called into question. In 1875 the decision was made to abandon the building on the High Street, in place of a new, purpose-built station.

26, High Street was finally vacated by Bushey’s policemen nine years later, when all police business was relocated to the eagerly awaited new building.

Since 1884, Bushey’s first police station has served the village as as a watch-repairers, surveyors office, hairdressers and more recently as an antiques shop. In the 1980’s, an early Metropolitan police truncheon was found on the premises and is now on permanent display at the Bushey museum. Despite being fitted with a shop-front in the 20th century, the original fascia of the building has since been recreated. A blue plague next to the front door now informs passers-by of the building’s former role. The building is a private home once again and has been renamed Church View House.