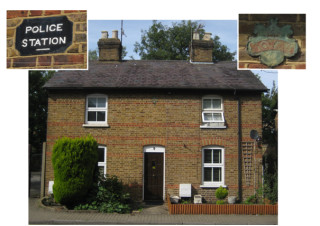 Rickmansworth’s first purpose-built police station was completed in May 1865. Situated on a new street named Talbot Road, the two-storey, double fronted station was ideally located to serve the town centre. A single storey extension, comprising two cells, was built onto the northern exterior of the station-house. The cell block was ventilated by a single window complete with bars, and rendered the town’s cage redundant. The station was initially inhabited by a Police Constable named W. Clark, who had already been a local officer for eight years. Over the next thirty years, the police station accommodated a number of different officers and their families. On 31st July 1889 the wife of a resident Constable, named Bates, gave birth to their daughter on the premises.

By 1891, the population of Rickmansworth and its environs had increased, from 5472 to 6968 in just ten years. Despite its growing community, just five of the county’s policemen covered the 10,030 acre parish. The town itself was policed by one Sergeant and one Constable, with the remaining three men living and working in Croxley Green, Chorleywood, and Mill End. Unsurprisingly, Chief Constable Robertson’s successor, Henry Daniell, lobbied the Standing Joint Committee to authorise the appointment of another two officers for the area. Inevitably, the building on Talbot road became quickly outgrown, prompting Daniell to find a new facility. It was finally replaced in 1897, and became a private house.

The external cell was demolished in 1960 and the building has since been converted into two maisonettes. A nineteenth century ‘Royal’ fire insurance plate is still visible on the front of the building. Despite being a private residence since the 19th Century, the building also still bears its ‘police station’ sign on its side. It is not known how many callers have erroneously knocked at the door, seeking police assistance during the past 117 years!