You are here: Home>Crimes and Incidents>Policing before the Police Force>Hertford's cage, stocks and whipping post 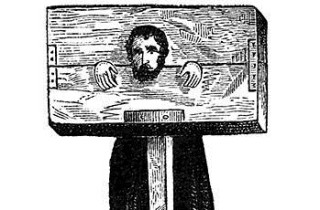 In 1834, Hertford’s Cage (former lock-up) was situated opposite the Borough Surveyor’s office, towards Castle Street. The stocks were nearby.

It was a wooden building, about 10 ft square.  One side of it was in a line with, and about level with the street gutter, and a stream of water about 2 ft wide flowed past.  The stream originated somewhere near what used to be Messrs Austin’s shop, (which was the Misses Hilton’s in 1900) and ran towards the Wash.  Access to the Cage was via a plank across the stream.

The Cage was covered in slate and had a cell inside with double doors and was lined with iron.  The Watchman, Mr Randall, lived near the Bailey Hall Gate.  Some prisoners managed to break out through the roof.

The Whipping Post used to stand against the Town Hall on the south side.  Both this and the Cage were removed as cells were incorporated in the police station.