You are here: Home>Crimes and Incidents>Suicide and Cases Reported to H.M. Coroner>Shooting tragedy : cherry orchard fatality in Leverstock Green 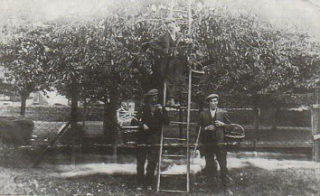 The Cherry Orchard c1925 with Harry Matthews, Jess Smith and another member of the Matthews family
Leverstock Green History 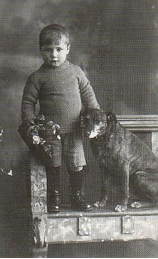 “I  PULLED THE TRIGGER TOO  SOON

“I  reckon we were a quarter of the way up the orchard and little Willie Matthews was about ten yards from me on my left.  I was carrying the gun under my left arm so that the barrels were pointing towards Matthews on the right thigh.”

In these words Leonard Cyril Smith aged 16 years and 5 months of Leverstock Green, described to the Coroner at an inquest at the West Hertfordshire Hospital, on Monday, the tragic incident that ended in the death of his cousin, Charles William Matthews, aged 13 years.  On Tuesday June 14th, Mr Leonard Smith, father of the lad concerned in the fatality, together with his brothers, acquired  the cherry orchards at Chambersbury, Leverstock Green, the property of Mr Bailey.  On Thursday, the 16th, Mr Smith’s nephew, the deceased, went to the orchard and walked round with his cousin.

Mr Smith went to a hut that he had brought to the orchard, and the little lad Matthews then joined his cousin, who had come up meanwhile. The youth, Smith, had picked up a gun from beneath a tree and carried it round the orchard.  Then occurred the shocking incident, and the little fellow, after undergoing an operation at the West Hertfordshire Hospital, passed away on Saturday morning.  “The cause of death was shock, but if he had recovered from that he could not have recovered from the gangrene of the leg,” said Dr Gilroy at the inquest.

Mr Lovel Smeatham , the Coroner, in returning a verdict of “accidental death,” said that clearly it was an accident; and he felt in these cases that nothing could be gained by commenting on the facts.  It was a matter to be regretted that a loaded gun should be left unattended in an orchard, and it was a pity that a youth of 16 years should be able to pick up a gun. The excitement of shooting at the birds got the better of him, but apart from that nothing could be gained by commenting on he circumstances.

The first witness at the inquiry was William Matthews, of Blacksmiths Row, Leverstock Green, a builder’s labourer, who said he was the father of the deceased, who was 13 years of age.  Witness did not know that on Thursday of last week the deceased had gone to Chambersbury.  The last time his son spoke to him was on Wednesday night at about 9.40, when he said “Good-night Dad,” as he was going to bed.  He saw the deceased in the hospital, but he was asleep on each occasion that he visited.  The boy, Leonard Smith was a relative of the deceased and they were on good terms with one another.  He had never heard a cross word between them.  Witness could not say if the deceased was in the habit of going to mind the cherries at Mr Bailey’s, he had not heard of it.

The Coroner : You had no opportunity of speaking to him after the accident? – No ; that is what is worrying me; because I did not speak to him.

Replying to the Coroner, witness said that everything possible was done for the boy at the hospital.  He first heard of the accident on Thursday night, when his little boy, who was crying, said “They have shot my Will.”  Mr Ayre, the schoolmaster, told witness that his son had passed away just after two o’clock on Saturday morning.  The deceased had never had a day’s illness in his life.

Leonard Smith, Cupid Green, Hemel Hempstead, said that he was the father of Leonard Cecil Smith, who did not live with him.  Witness and his two brothers had the cherry orchards and he personally looked after them.  He was living on the orchard at the time, in a hut on four wheels, in order to be able to look after the cherries constantly.  On Thursday evening, the boy, Charles William Matthews came into the orchard just before seven o’clock.  They had bought the cherries only the previous Tuesday, and that was the first occasion on which the deceased had been there.

At the time there was a gun standing by a tree.  It was a muzzle loading gun, and had been left there by witness’ brother Jesse.  At the time deceased came up witness was standing by this tree and the lad said “Have you any birds uncle” and he replied “No I have not”.  They walked on up the orchard for about 50 yards  Witness was carrying a gun at the time.  He heard someone shout, and, looking round , saw his son standing against the tree.  He shouted “Is this gun loaded?”, and witness replied “Yes”.

Witness’ son had previously been in the habit of scaring the birds with a gun.  Witness and the boy Matthews continued their walk and after a time he had said to the lad “We will go back, I will pick up the hut as it is getting late.”  He went to the hut putting some groceries in and leaving the boy outside.  When he came out of the hut the boy had disappeared.  The next he heard was the report of a gun and somebody shouted.  He saw the deceased lying on the ground and heard him say “it shot me”  He ran to the spot and said to his son, “What have you done.” He said “I pulled the trigger in mistake, dad.”  The gun was lying on the ground.  He told his son to fetch the nurse and anyone else he could get at once.  Witness said to the deceased, “Where are you shot Willie?” and he said “In my leg, uncle.”  The nurse came to the orchard and took charge of the boy, bandaging up the leg.

Witness added that the gun now produced in the Court was the one.  It was perfectly safe and was hard to pull.  In fact it was too hard to pull, and that was why he did not take it.

PC Dickinson here demonstrated the pressure that had to be applied to the trigger.

Witness said that he did not give his son permission to use the gun on this occasion, but he knew enough about the gun, having used it before, that he was not afraid of the boy having it.

Replying to Superintendent King, witness said that the boys were two yards apart at the time he heard the report.  deceased was lying to the left of the Witness’ son.  The gun was on the ground, two or three yards from the boy.

Leonard Cecil Smith said he lived with his grandmother at 7, Belcony, Leverstock Green.  He was on good terms with the deceased, who was his cousin.  He worked at Apsley Mills and it would be between 7.20 and 7.30 on Thursday last when he went to the orchard and saw the deceased, first with Witness’ father. He saw the gun by the trees and shouted to ask his father of to was loaded.  He picked up the gun and went round the orchard looking for birds.  He was later joined by the deceased.

“What happened then?” asked the Coroner and witness gave the statement above.

Witness added that he called father at once.  Deceased called out “Uncle Jim, I’ve been shot in the leg.”  Deceased said to witness “Don’t worry it was not your fault.”

The Coroner: were you playing with the gun? – No sir.

He was not trying to get it from you?

Witness added that he fetched the nurse and also the boy’s mother.  He saw a good deal of the deceased and they were quite friendly.  He had fired the gun twice previously that year and did so a good deal last year.  He agreed that the trigger was a little hard.

Superintendent King : Did he give any sign when that he heard you when you said “Keep back”? – He did not do anything.

What was your object in telling him to keep back? – In case the gun went off accidentally.

Did you put the gun down or did the recoil force it from your hands? – I threw it down at once.

Dr E.W. Gilroy, Hemel Hempstead said that on Thursday at about 7.30 p.m. he was summoned by telephone by M. Ayre of Leverstock Green.  He went at once and arranged for the ambulance to follow.  He found the boy lying on he ground and the nurse had dressed the wound.  The boy was suffering from shock, and there were many marks on the upper part of the right thigh.  There was bleeding under the skin.  He was taken to the West Hertfordshire Hospital, where he was operated on that night at about 9 o’clock.

The operation was to tie an artery and two vessels that had been severed.  The boy had lost a good deal of blood but no enough to be of danger.  All circulation below the wound had stopped.  He died on Saturday morning.  The case was hopeless from the first.  Deceased died of shock but had he recovered from that he would not have recovered from the gangrene.  The boys might have been 10 yards apart but he should have thought, judging from the wounds, that they were nearer than that.

Mary Heaton Hendry, 2, Curtis Road Leverstock Green, the district nurse, said that she was called by the witness, Leonard Cecil Smith, and took bandages with her.  She bound up the wound and waited for the ambulance to come.  Dr Gilroy came very quickly.

The Coroner : Did the deceased tell you anything of the occurrence? – He said that he did not cry, and he also said to the boy Smith  “There will be no more shooting of guns.”  A nurse came with the ambulance so witness did not go to the hospital.

Mr Walter Ayre, schoolmaster, of Leverstock Green , said that deceased was a pupil at his school.  He was in his front garden at 7.30 on Thursday when the deceased’s mother told him of the occurrence.  He cycled to the orchard, the nurse was there and he at once ‘phoned for the doctor.’  He went down to the hospital with the boy and that night before the nurses were ready for the operation he asked the boy how far he was from the gun.  He said that it would be the distance between his bed, which was in the Sebright Ward, to the bed at the other side of the ward.  It would be about 10 to 15 feet.  He stayed at the hospital till just after 10 o’clock, and phoned up in the morning.

On Friday night he called on his way back home from choir practice at St John’s Church.  He then found that deceased’s mother was in such a condition that she could not continue by the bedside. He said that he would relieve her that night and did so.  He was by the bedside within two seconds of the death of the boy.

The Coroner : You had no opportunity of speaking to him again? – No ; I could not speak to him again and could find out nothing else from the boy.

You probably found out all there was to find – Probably.

The Coroner returned a verdict as stated and the inquiry closed.

18th June 1927 – In the red ink reserved for important and tragic events, Walter Ayre recorded in his school’s log book that:  “William Matthew passed away in the West Hertfordshire Hospital at 12.00 pm in my presence.  Death due to shock and loss of blood from G.S.W.”