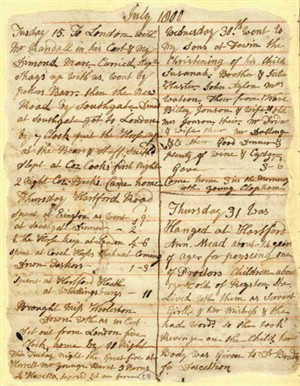 On Thursday, was committed to Hertford Gaol, Ann Mead, aged 15, for poisoning the infant child of her master, Mr Proctor, of Royston. A powder was found in its stomach which from some experiments that were made was declared to be arsenic. After many declarations of her innocence, on cross-examining her closely it came out that the child had swallowed a powder and she afterwards confessed that she had given it half a spoonful of arsenic, and assigned as a reason for this diabolical act, that her mistress had called her a slut, and she resolved to spite her.

The Ipswich Journal 2nd of August 1800

Ann Mead, a young woman only 16 years of age, was convicted at Hertford Assizes, of the wilful murder of Charles Proctor, an infant not 18 months old, and was ordered for execution on Thursday next. It appeared in evidence that she was servant to the parents of the child and that she had purchased an ounce of arsenic at grocers in Royston, with which the child had been poisoned. It seemed she had been induced to commit this horrid act, merely in malice to a mistress, who would found fault with her for not keeping the child so clean as she ought to have done.