Transcribed from a Broadside by Johnson, Printer, Hertford. 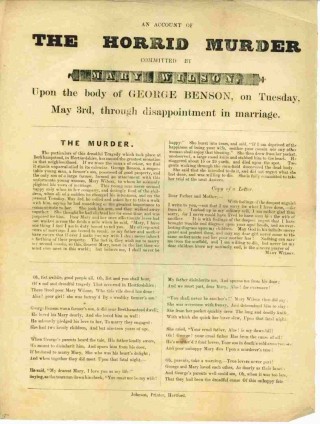 An account of the horrid murder committed by Mary Wilson upon the body of George Benson, on Tuesday, May 3, through disappointment in marriage.

The particulars of this dreadful tragedy, which took place at Berkhamsted, in Hertfordshire has caused the greatest sensation in that neighbourhood. If we trace the annals of crime we find it stands unparalleled in its calendar. George Benson, a respectable young man, a farmer’s son, possessed of good property, and the only son of a large farmer, formed an attachment with this unfortunate young woman, Mary Wilson, to whom he solemnly plighted his vows of marriage. This young man never seemed happy only when in her company, and dotingly fond of the children, when all of a sudden he changed his intentions and on the present Tuesday, May the third he called and asked her to take a walk with him, saying he had something of the greatest importance to communicate to her. She took his arm, and they walked away together. She thought he had slighted her for some time, and was prepared for him . Poor Mary and her once affectionate lover had not walked across the fields a mile, when he said “Mary, I have one thing I feel I am duty-bound to tell you. My oft repeated vows of marriage I am bound to recall, as my father and mother of sworn that if I ever make you my wife, I shall never inherit a farthing of their property. The fact is they wish me to marry my second cousin, so this dearest Mary must be the last time we must ever meet in this world, but believe me, I shall never be happy.”

She burst into tears, and said “if I am deprived of the happiness of being your wife, neither your cousin nor any other woman should enjoy this blessing.” She then drew from her pocket unobserved, a large cased knife and stabbed him to the heart. He staggered about 15 to 20 yards, and died upon the spot. Two gentlemen walking through the cornfield discovered the dead body. She said that she intended to do it and did not regret what she had done and was willing to die. She is fully committed to take trial at the next assizes.

Copy of a letter

With feelings of deepest anguish I write to you-not that I’m sorry for what I have done, far from it. Locked up in my solitary cell, I am neither glad nor sorry, for I never could have lived to have seen him the wife of another. It is with feelings of the deepest regret that I brought trouble and disgrace upon your aged heads, and an everlasting disgrace upon my children. May God in his infinite mercy guard and protect them, and may my dear girl never come to the same unfortunate end the poor mother has! Nothing can save me from the scaffold, and I am willing to die, but never let my dear children know my untimely end, is the sincere prayer of Mary Wilson.

I was sad and dreadful tragedy that occurred in Hertfordshire,

There lived poor Mary Wilson, who this vile deed had done,

Alas poor girl she was betrayed by a wealthy farmer’s son.

George Benson was a farmer’s son did near Berkhamsted well,

He loved his Mary dearly, and she loved him as well

He solemnly pledged his love to her, to marry they engaged,

She had two lovely children, and but 19 years of age.

When George’s parents heard the tale, his father loudly swore,

He meant to disinherit him, and spurn him from his door

If you dared to marry Mary, she who was his heart’s delight,

And went together they did meet up on that fateful night

He said “my dearest Mary, I love you as my life”

Saying as the tears ran down his cheek, “you must not be my wife!

My father disinherit me, and spurns me from his door,

And we must part dear Mary, alas, for evermore”

“You shall never be another’s!” Mary Wilson then did say,

She was overcome with frenzy, and determined him to slay,

She from her pocket quickly drew the long and deadly knife,

With which she quick her lover slew, upon that fatal night.

She cried, “You’re cruel father, alas! Is my downfall!

Oh! George! Your cruel father has been the cause of all

And poor unhappy Mary dies upon a murderers tree

George and Mary loved each other, as dearly as their heart,

And Georges parents well could see, when it was too late

That they had been the dreadful cause of this unhappy fate.