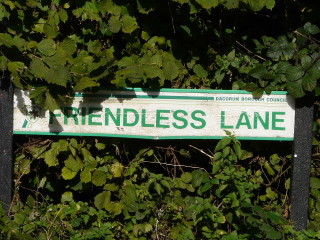 How a Hertfordshire byway got its name

Friendless, is an uncommon name for a by-way, even in a county given to unusual place­ names. Yet for the last 200 years since about 1750, a narrow country lane linking Flamstead with the hamlet of Cheveralls Green in west Hertfordshire has borne this unen­viable title.

Earlier records refer to the road as Cheveralls Lane, but like so many of our quaint English place names, common reference to a particular incident has determined its present name, which local people prefer to pronounce as “frindles.”

However, there was a far different reason for the tag “Friendless” for, if local legend has any relation to fact, a small but rather noticeable mound by the roadside is the burial place of a particu­larly unsavoury character, a man who died absolutely friendless.

Two hundred years ago, an increase in crime brought about a wave of indig­nation, and several reforms were intro­duced. One scheme sought to induce people to inform on suspects and to act in a manner similar to the infamous “bounty hunter” of the American West. Upon conviction of a suspected person, the informer was awarded a certificate, which in effect exempted him from the then compulsory, unpaid and therefore very unpopular parish duties which more often than not involved great hardship upon rich and poor alike.

The law allowed the recipient to dispose of this award for financial gain should he wish, and such was the demand for the “Tyburn ticket,” as it was called, that large sums often changed hands. The laxity of regulations concerning this par­ticular reform allowed the emergence in society of an obnoxious type known as a “ticket seeker.” people who were not averse to submitting false evidence to gain their ends.

These tyrants were particularly feared in small communities. and in Markyate, a few miles north of Flamstead, an inn­keeper who augmented his income by in­forming ruled the village like a feudal lord.

Abel Goodyear pursued his despic­able practice whenever he could. The unfortunate wayfarer was easy prey, but Goodyear was not above “framing” a case against members of his own com­munity. Knowing that the average villager had neither the means nor ability to defend himself ably in the courts, the  rascally innkeeper would lay charges against those whom he disliked. and the law in its blindness worked for him.

There was, however, one who was as popular among his fellows as Goodyear was abhorred, and Fred Fox, a hostler and a native of Flamstead, unfortunately came into Goodyear’s employ. This happy-go lucky character was in the habit of borrowing a donkey from an aged asso­ciate, and a cart from another. With this he contrived to add to his meagre income when occasion arose. Goodyear knew this, and when Fox subsequently terminated his service with him and took employ­ment with a rival Markyate innkeeper, Abel’s fury knew no bounds. He swore that Fox would rue the day. A few weeks later Fox really did have cause for con­cern. For, one day he was arrested, and with little ceremony hauled off to the county jail to await sentence.

Before the justices, Fox learned to his horror that he was charged with the theft of the donkey, which he had been in the habit of borrowing. A few hours before his last use of the animal Abel Goodyear had purchased it and, what is more. he had taken care to keep knowledge of the transaction from the unfortunate hostler. For he recalled that the original owner, old Tom Redman, had been in a drunken stupor and could not utter a word when he visited him as was his custom before taking the donkey from its paddock. Un­wittingly Fred Fox walked into Goodyear’s dastardly trap.

However, Fox’s disposition stood him in good stead, for, although the cost was heavy upon them and the risk of in­curring Goodyear’s wrath being very real, eight of his friends had made the journey to speak in his defence. That they had done so was not lost upon the justices, who, upon hearing the evidence of the former owner, dismissed the case. Goodyear was soundly reprimanded and warned as to his future conduct. But this did not defer him for, a few days later, he was again plotting the downfall of Fred Fox.

Among the many dubious characters, who were known to consort at times with Goodyear was William Conn, a particu­larly villainous vagabond. The plot was for Conn to waylay the hostler on his homeward journey through Cheveralls Lane. Conn was to injure his victim as to provide an example to others not to cross the innkeeper, who, having been publicly exposed, felt the need to restore his prestige.

The plan might have succeeded but for Goodyear’s nature. The thought of wit­nessing such a beating greatly appealed to his twisted mind, so much so that at the last moment he decided that he would indeed watch Fox being attacked. He hurried along the lane, and in the gather­ing gloom came upon Conn. Before he could identify himself Conn struck him with a cudgel, again the cudgel smote Goodyear, smashing him to the ground, where the blows con­tinued to rain on him until the innkeeper’s body lay crumpled and still.

Abel Goodyear paid the supreme penalty for his dastardly scheme in Cheveralls Lane. His body was later dis­covered and Conn, a simple-minded fellow, was so confused on discovering his mistake, that he gave himself up and related the whole story.

Such was the curious outlook of the law of those days that Conn was apparently sentenced to a short term of imprison­ment, the view being that he had un­wittingly served in ridding society of a criminal. Legend has it that Goodyear’s body was buried like that of a common highwayman at the scene of his intended crime. From that day onwards a little mound on the roadside gave birth to a new name – Friendless Lane.