You are here: Home>Police History>Other>Police Constables serving in South Africa: Approval of allowances 1900 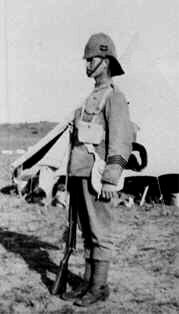 It was reported that twelve Hertfordshire Police Constables in the First Class Army Reserve were called upon to rejoin the colours for active service in South Africa.

The County Council unanimously approved the following allowances for the relatives of these men whilst on active service :

Unfortunately, one of the men had been killed in the Battle of Belmont.