My grandfather was a policeman 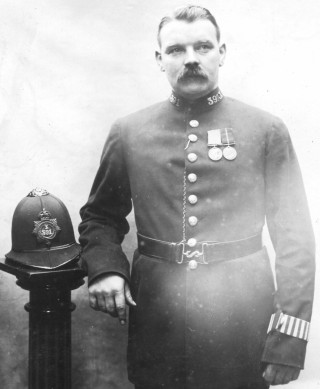 My grandfather was born in Cleator, Cumberland. When his great-uncle Thomas Little died in 1875 at Home Farm, Camerton, Thomas’ younger brother, Robert, took on the tenancy of the farm. Robert subsequently died in 1888, when his wife, Elizabeth Little, managed the running of the farm. In those days land was given in exchange for favours to the royalty and was divided into smaller parcels of land that were then leased out to tenant farmers in return for rent due four times a year. Elizabeth vowed that the men would not leave the farm until all the debts of their father were paid off. A farm did not earn enough money from the “milk cheque” to support the male members.

This may have been all impetus he needed to up sticks and travel south to join the Metropolitan Police in London. So in 1893 he travelled south to have a medical to join the police force. He was assigned to Willesden Division (X-Division) and stationed at Harrow Road Police Station, Marylebone (now disused and boarded-up but still a listed building). It was while he was assigned to this police station that he met Elizabeth Martha Goddard (his future wife) in the Portobello Road area. Her father had a butchers shop. 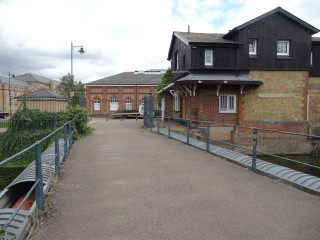 Police Station@ RSAF
In 1903 he was transferred to N-Division (Islington) who was responsible for the security at the RSAF. At the moment he was still single and was resided in lodgings in Bell Lane. In those days there was not the proliferation of private security firm that there are today. The security of the RSAF was provided by the Metropolitan Police. The police station was an integral part of the RSAF. The police house (station) is still standing today adjacent to the bridge, which was the only access to the island that contained the RSAF. People and vehicles entering and leaving the RASF site would have to report to the on-duty police officers in the police station. The nature of the product manufactured meant that security was a way of life for workers and visitors alike.

The RSAF was established in early 19th century due to the fact that the private sector was not able to provide enough guns for the Napoleonic War. Making & fitting of parts was a skilled job done by hand; every gun was unique. The investment in mass production came too late for Crimea War. The government of the day was embarrassed by lack weapons and had to rely on private industry to make good shortfall. The most famous was rifle used extensively in the trenches of WWI. Highly reliable weapon due to mass production techniques introduced into factory in 1850s. All parts were interchangeable. The Lee-Enfield rifle was designed by James Paris Lee. It was a bolt-action repeating rifle with a magazine. It was manufactured @ Enfield Lock and used .303 bullets @ the rate of 20-30 shots/min. The magazine was 10 round, double column unit. It was effective between 500-3,000 yards. 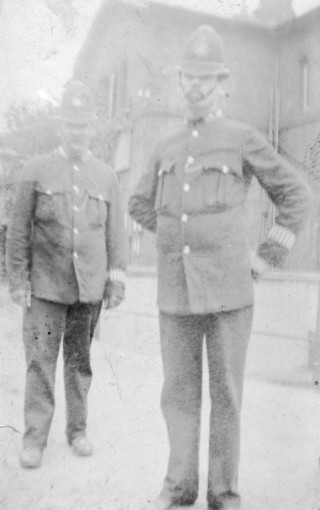 There were a number of reasons why the RASF was located where it was. First, was the plentiful supply of water power, which was used to drive the appliances in the machine shop. Second, the closeness of the Royal Gunpowder Mills just up the road in Waltham Abbey, which was a ready source of ammunitions. Third, the water pervaded the whole of the site which was used to transport heavy machinery into and out of the RSAF. Fourth, the splendid isolation of the marshy farmland and finally the inherent security of the site surrounded as it was by water.

He married Elizabeth Martha Goddard in 1904 and moved to a police house. Here they raised four children all born in Salisbury Road, Enfield Lock: Elizabeth (my spinster aunt), George (a boy solider who did service for his country all around the world), Robert (my father) and Jackie (who died just after 21st birthday).

The rest of the family

His second brother Thomas followed him down to London in 1902 and did his full service in X-Division (Harrow Road, Marylebone). His most notable achievement was servicing his time in South Wales in 1911 during the miner’s strike of the time. The next brother, Robert, bought himself out of the Royal Navy as a stoker in 1905. He lasted just over 12 months before he high-tailed it to join the Malay Straits police force. He joined the “rubber revolution” and was dead by 1921.His youngest brother Jack (John) emigrated to Western Australia before the First World War. Later he married Emily Elizabeth Goddard, sister of George’s wife; talk about keeping it in the family.

…and in the end 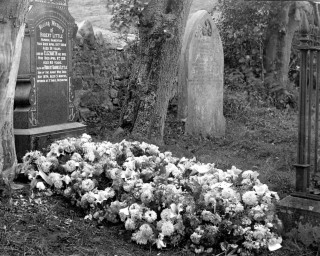 George Little's funeral
In 1921 he was forced to resign from the police since he had done over 25 years as a serving policeman. On further investigation of his retirement papers, I discovered that he was injured during the service of his country. He sustained a puncture wound in his left leg, for which he took off 20 working days. I did not determine whether this happened during his time at Harrow Road police station (1893 – 1903) or during his time at the Royal Small Arms Factory (1903 – 1921). Although he tried to find employment as a commissionaire, he died 10 years later during a period of convalescence in 1931 in Cumberland. He was buried in the family grave in Camerton churchyard, Cumberland.

His life came full circle; he died in the part of the country where he grew up.