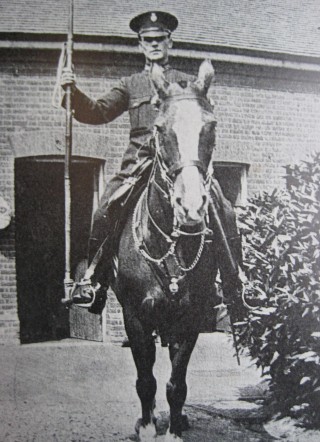 Prior to the introduction of motor vehicles in the early twentieth century, horses were a fundamental part of policing in Hertfordshire. All divisional police stations were equipped with stables and were usually the permanent home to one or two horses. Prior to 1881, groom-boys were employed at police stations to tend to them. This responsibility was later given to a designated Constable. A trap or cart was usually also kept at the station, but rarely used by anyone other than the senior officer. Tragically, Superintendent William Pangbourne was killed in 1867, when the trap he was riding in overturned on the outskirts of Hitchin (full story here). In one example from 1896, Hemel Hempstead’s Superintendent, named Frogley, went out on an enquiry with a Detective to arrest a man for murder. After a violent struggle, the offender was brought under control. Frogley then rode back to the station in his horse-and-trap, leaving the Detective and prisoner to follow on behind on foot. By 1914, the Hertfordshire Constabulary had thirteen horses. At the start of the First World War, all of them were requisitioned by the army for military use. After the war, the mounted section was reformed but with just two horses. The last of these was named ‘Benny Ally’ and was ridden by PC Thomas Oliver. Benny Ally retired in 1928 and was not replaced.