You are here: Home>Hertfordshire During the First World War Learning Resource>Friend or Foe?>Alien Registration and Restrictions 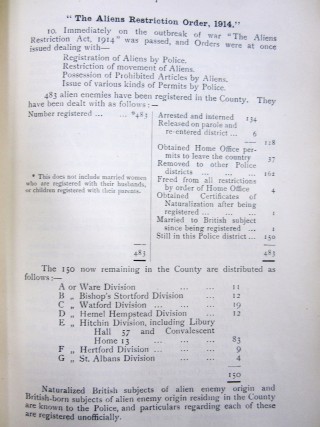 When was the Alien Restriction Order introduced ?

What did the Order deal with and how were the police involved ?

How many Alien Enemies were registered in Hertfordshire ?

Of these, how many were arrested and imprisoned ?

Alien Enemies could not travel more than five miles from the police station where they were registered without obtaining permission. Can you imagine how this must felt ?

Look at the second item.  Who was Morris Greenberg ?

Where did he live ?

Why did he have to report to the police station in Bishop’s Stortford ?

At this stage in the War, Russia was an ally, so why do you think Russians still had to register and have their movements monitored ?