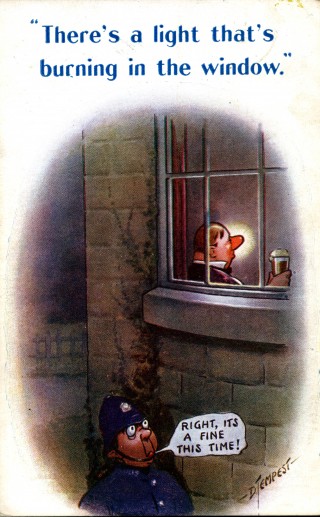 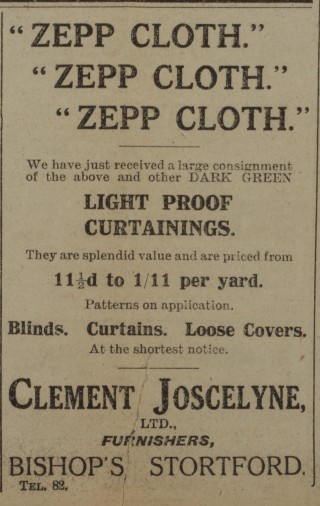 From Monday, 5 April 1915, official lighting restrictions came into force for the whole country.

Lights visible from the sea or estuary had to be extinguished and indoor lights were to be obscured from outdoor vision.

Read the transcript below

What was the reason that there was a breach of the blackout by George Hayes ?

Look at the postcard – this pokes fun at the situation. Why were people able to laugh at this do you think? What does it tell you about people’s attitude to the wartime restrictions ?

Why did Clement Joscelyne’s advertise their blackout cloth as ‘Zepp cloth’ ?

Below is a transcript of a blackout breach which was reported in the local newspaper.

“George Hayes, 36, Maltser,  of Oak Street, Bishop’s Stortford, was summoned for permitting a breach of the Lighting Order on December 21st.  P.C. Springett said he was on duty in Bartholomew Road about 6.45 p.m. on this day, when he noticed an illumination in the direction of Oak Street.  On proceeding there he found that a light was coming from the window of defendant’s house, the blind of which was not sufficiently thick or dark to prevent the light from escaping.  He pointed it out to the defendant, who said he had forgotten to put the covering over the window.  Defendant expressed regret and said he had a brother-in-law home from France and he forgot about covering the window.

A fine of 5 shillings was imposed.”